Since the holidays, Wildlife Emergency Services has received a number of calls about a turkey on the loose in the Hyde Park neighborhood of San Jose - near 1st Street and the 880. Callers expressed concern for the welfare of the animal, worried that it might get hit by a car.

Yesterday, Duane and Rebecca went to investigate and found there are, in fact, two wild turkeys - a young male (also referred to as a jake) and young female (a jenny). 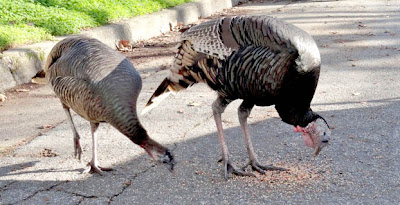 While it's not uncommon to see wild turkeys wandering city streets and neighborhoods that border wildland, it is unusual to see them so deep within city limits. One theory is that someone in the neighborhood raised them from poults, then released them.

Both birds appear to be in good health, though somewhat habituated, but the jake has developed a very bad habit - he runs up to and chases after cars! Witnesses say he's been the cause of at least two traffic accidents, so far.

It was clear, the turkeys needed to be removed. If they stayed, they would continue to pose a risk to pedestrians and the motoring public and would eventually be killed - either by a car, a person, or a dog.

On Friday, January 12th, Duane and Rebecca headed to San Jose to attempt to capture the two wild turkeys - which was not going to be easy. The birds were spooky and shy from being shooed, and from prior attempts by others to capture them.

When the team arrived, the neighborhood was abuzz with lawn mowers and leaf blowers. The birds had become separated and were wandering the neighborhood alone. The hen was pecking at grass clippings and the occasional insect, while the male appeared attentive and edgy.

The birds would only allow a gentle approach to about 20' before they felt pressured to move off. Rebecca tried to lure the birds closer with a mixture of seeds, and live crickets, but with little success.

The team spent hours looking for, finding, baiting, failing, losing sight of and driving around and around, but not in vain. Every encounter yielded invaluable information they would use to their advantage.

Successful capture plans are based on the behavior of the animal - what it's attracted to, what it's least afraid of, where it feels most comfortable, and any habits. Thanks to a call from the Diocese of San Jose, our team knew the birds frequented the office building on the corner of 1st and Burton every afternoon, where the male, especially, seemed taken with his reflection in the mirrored windows.

It was about 3:00 when the team caught up with the male turkey as he was making his way down the long mirrored driveway. Rebecca set out a pile of seed to keep him occupied. Duane grabbed a large hoop net and they moved in. Check out the video below.


The young turkey was transported to Wildlife Center of Silicon Valley for a health exam. If the bird is deemed healthy, the Department of Fish and Wildlife will decide where the bird can be relocated - far from people!

The duo will return this week to try for the jenny. 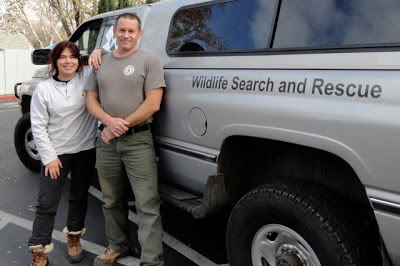 That was a great catch! Good luck with the jenny!

Thanks for doing this. I once encountered a similar turkey in El Cerrito - it chased cars, thoughfortunately on a narrow residential road. I've read that wildlife cannot be relocated, only exterminated. Is there a turkey exception?

We have several flocks that have established themselves within the city limits of Berkeley & Albany. There is one in my neighborhood that is about 15 strong

In some instances, wildlife CAN be relocated. In this case, it is up to the CA Department of Fish and Wildlife.

We call the duo Romeo and Juliette. I miss Romeo coming and pecking at our office window every morning but I know that he will be much safer now. I hope you can find Juliette soon I would hate for the two of them to be apart for very long.

The female is walking up and down Second Street closes to Burton for the last few days. She looks sad. :(

I hope Jake and Jenny can live together again.

Was wondering if the pair were ever reunited? Were you able to catch the other one?
Thanks for your effort.

We have a lot of turkeys on our land in western Illinois. They have a complex family structure, with the sexes occurring in separate flocks after they reach sexual maturity. Hens will associate with toms when ready to mate. They then leave the toms and raise their brood alone, then often leave the area until the next breeding season. The toms remain together as a family unit for many years. We have five toms that have been on our property for about 8 years. I was surprised that the San Jose tom was chasing cars. In my experience it is the hens that become aggressive, in the case of our rural location, chasing joggers instead of cars. The joggers have really benefited from these meetings and have greatly increased their speed and endurance as a result. Sharon Chester, San Mateo CA.

Are you guys still coming for the other one? I saw her on 3rd and Younger -- and I'll agree with Anon above -- she looks sad.