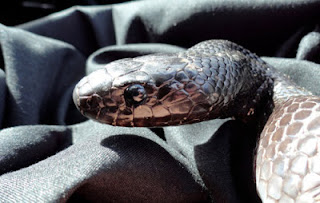 This morning, WES received a call from a fellow in downtown Santa Cruz, reporting a very long constrictor-like snake that he said, "does not belong in public", it was so large. It was found behind a construction site.

Not knowing what they would find, lead responders Duane and Rebecca brought gear suitable for an 8' snake.

When they arrived, they found a very, very chilled and somewhat dehydrated black king snake - maybe 3 feet in length. This species is not native to the area, but are often owned as exotic pets.

Rebecca placed the serpent into a pillow case and set it on the dashboard of the rescue vehicle with the heater blowing warm air. By the time they reached the Santa Cruz County Animal Shelter, it was starting to warm up and wriggle.

At the shelter, the snake was quickly seen by a veterinarian and then placed into a large terrarium with a heat lamp and a deep bowl of warm water. The snake began drinking immediately.

THANK YOU SANTA CRUZ ANIMAL SHELTERFOR THE EXPERT CARE OF THE SNAKE!!!