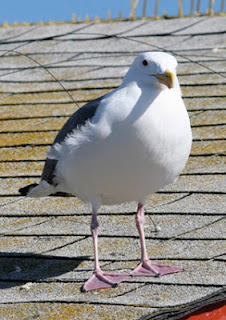 It started with my rounds on February 13 in Monterey. On the Wharf, I found two birds that needed help.

The first, was a rock pigeon with material so tightly wrapped around its toes, it's foot looked like a club as it hobbled along. It was flighty and wouldn't come close enough for me to capture it.

The second bird, a good-sized gull entangled in fishing line and possibly an embedded hook, was also too skittish to bait in. I tried everything in my bag of tricks to get it to at least fly down off the roof of one of the buildings on the wharf. I think somebody's tried to catch it before.


Today I returned to the wharf to see if I could spot the gull. Sure enough it was still there. The monofilament line had moved around and there seemed to be more of it hanging out from the bird's wing. 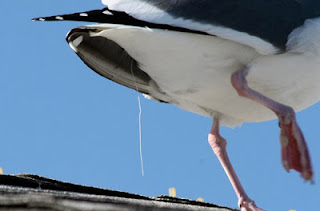 He was still very sketchy. I walked to the very end of the pier - as far away from people as I could get, set up my net and baited in about 25 gulls, trying to lure that particular one.

He was one of the last to appear. I tried for over an hour, but every time it got close, people, kids, dogs...something would cause all the gulls to fly off. Ugh!

Most passersby are oblivious and don't even recognize what I am doing, but today, this one woman stood there watching from a distance the entire time, and when I had finally given up she approached me and said, "Your job is so infuriating. I couldn't do it. I tried to stop as many people as I could for you, but they just don't listen!" So true.

As I made my way to the car, I saw the hobbled pigeon. Unfortunately, he didn't hang around long enough for me to get set up. I'll be back.