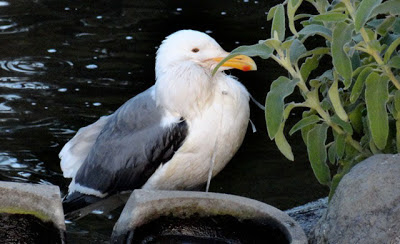 This afternoon, WES received a call from a person at San Lorenzo Park in Santa Cruz, reporting a gull, tangled in some sort of white string-like material, like balloon ribbon.

I arrived just before sunset. A large group of gulls, mallards and coots was gathered at the feet of some people who were feeding them. As I scanned the gulls, I asked the family if they'd seen the one entangled in string. They had not.

A lot of times, injured birds will stay on the outskirts of activity, avoiding confrontation by other birds. If their injuries are severe, they'll often pick a safe, isolated spot to rest.

As I walked the perimeter of the little pond, I scanned the birds out in the middle of the water. There was a gull that looked a bit ragged and wet (maybe we'll try for him tomorrow), but not entangled. Then, as I rounded the curve - there it was.

Looking horribly distressed, an adult Western gull stood quietly at the edge of the pond. You could see the curling ribbon around its neck, and a large, baseball-size bulge in its throat - perhaps food it could not swallow.

Was there a hook involved? Did someone intentionally tie ribbon around its neck? Or, did the bird just happen to get tangled up in discarded ribbon from a balloon?

Most curling ribbons are made of polypropylene (PP), a flexible yet rugged plastic compound used to make anything from plastic bins to thermal underwear. This stuff wasn't going to breakdown and fall off before killing the bird. The gull needed help, and fast.

I grabbed 'bait' and a long-handled net from my truck, assembled a cardboard carrier, then recruited the bird-feeding family to help out.

Using a large bush as cover, I set my net without the bird seeing me. Next, I needed to coax the bird to move into range, using food to draw it close.

At first, the gull showed little interest in Fritos (my bait of choice), but after a few dramatized tosses of Scoops high into the air, attracting nearly every bird in the pond, the gull finally moved off the ledge and toward me.

Without pause, I dumped an irresistible amount of chips right in front of the hoop. In no time, the gull was head-down and focused on consuming the greasy meal. That's when I made my move and bagged it in the soft netting. 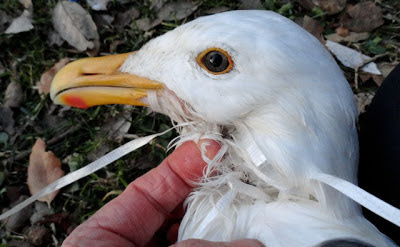 The bird was thin and weak. As frightened as it was, it could barely put up a fight. It must have been this way for many days, if not a week or longer.

By now, a crowd of spectators had gathered. One of the bystanders helped me cut some of the material - just enough to relieve pressure on the bird's neck and mouth.

With the gull safely stowed inside a cardboard carrier, I headed for Native Animal Rescue (NAR) on 17th Ave in Santa Cruz.

There, the bird received immediate attention by hospital staff. They found the line coming out of the gull's mouth was twisted tight around its tongue. Once the line was cut, they removed the putrid mass of food from its throat. The bird was hydrated and given the night to rest.

Hopefully, the bird can recover. We will post updates as we receive word.

Postscript: I can't get passed feeling this was an intentional act of cruelty. Sure, animals get tangled in manmade debris all the time, so, yes, it's totally plausible, but I can't shake it. Maybe it's my dismal outlook on our society, having seen so many awful things that people do to animals...

In case this was intentional, if someone knows who did it, please come forward and report what you know to local authorities or through the California Department of Fish and Wildlife CalTip line 1-800-DFG-CALTIP (800-334-2258).

That was a nice video. Poor birdie, he was a pretty good patient, though, and what a pro job was done. Good work!