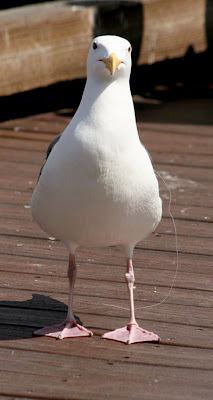 One of our lead responders, Deanna Barth, knows that only through practice will she hone her skills at capturing injured wildlife, especially flighted birds. So, most every Friday after work, she does her "rounds", scouring local hot spots for injured seabirds.

More than a month ago, during a visit to the Monterey Municipal Wharf, she encountered a gull with line hanging from under one wing. We covered it in a blog post, HERE.

On her many visits to the wharf, Deanna tried all the tricks in the book to get the bird to come close enough where she could net it, but the bird was much too wary.

Today, however, Deanna was triumphant!


As soon as I neared the end of the pier, I spotted the bird.  It was standing in front of a bench where a man and his wife were eating fish and chips. It looked as if the gull was hoping they would share.

Several people were standing nearby, pointing at the line dangling from the bird's left wing.

I slowly approached the seated couple, introduced myself and and my intentions, and asked if they wouldn't mind helping.

As I instructed, the woman began tossing pieces of her lunch onto the ground, while I quietly slid my net against the bench. It wasn't but a minute before the bird went for the bait - and I caught it.

There was a round of applause from the crowd, and the gentleman on the bench said,  "Well, I guess that bird will never trust an English tourist again!"


The gull was taken to the SPCA of Monterey County Wildlife Center where the hook was removed. The gull was freed the following day.

Way to go Deanna - your perseverance paid off!

You are truly the animals' angel, Deanna. God is surely proud of you as all we animal lovers are. Bless you!