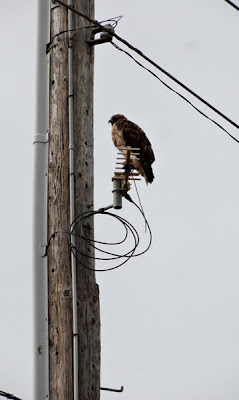 On March 11th, WES received a call about a hawk caught on razor-wire fencing at Couch Distributing in Watsonville, CA. We were told it was snagged by a blue chord attached to leather jesses on its legs. This was obviously a bird that someone had tethered - perhaps a falconer's bird.

Fearing the hawk would suffer severe injuries from the barbs, Fleet Manager Jim Griffin, braved the razor-wire, and freed the bird before we arrived. It flew off with its tethers still attached.

On March 18th, one week later, WES received a call reporting a hawk caught on a utility pole, about a mile from the distribution center. The reporting party, Rosendo, described it being caught by a blue chord that was tangled on an antenna about 30' up the pole.


WES' Rebecca Dmytryk alerted PG&E of the emergency before responding on scene.

It wasn't long before Electrical Troubleman with PG&E, Bill Kelly, arrived with a bucket truck, and helped Dmytryk reach the bird. Check out the video below. 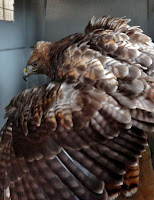 Once the hungry bird was secured in a large holding cage at WES headquarters and given a meal, Dmytryk made some calls to try and track down the bird's handler. Through various channels, the falconer was tracked, and reunited with his bird the next day.

Many, many thanks to Rosendo for alerting WES of the bird in distress and for filming the rescue (Great job!), and to Bill Kelly with PG&E who made it possible to rescue the bird!

WES is a 100% volunteer-run charity, dependent on donations to run its 24/7 emergency response operations. Go HERE to make a contribution, or HERE to sponsor the team for a day, a week, or longer! Thank you!

Owning any birds of prey, other than licensed rehab centers, should be illegal. How many falconers report such lost birds who die with their tethers caught, or are "caught" by other prey due to the tethers? It may have been considered "sport" in the dark ages, but it's got to be banned in the 21st Century.

Falconers are the reason the Peregrine Falcon is no longer on the endangered species list. The Peregrine Fund is run by falconers and helped not only the Peregrine but is also helping the Aplomado Falcon back from the precarious line of endangerment. Falconers are not the enemy. It's rare that a bird is lost WITH equipment still on, often times that is because the bird has pulled through the knots while out weathering. Falconers LOVE their birds. And ANY falconer will do EVERYTHING they can to safely retrieve a bird that is lost. No matter the cost.

These are still wild/near wild animals. The falconer can't control every variable.

There are bad falconers out there, sure. But there are also bad dog owners. But no one is saying that no one should have dogs ever because some one isn't responsible. The BIG difference here is that falconers have to report to the government and they CAN lose the right to owning these birds while pet owners who neglect are rarely caught.
Most of the time, however, the reason birds get lost or die is because of an accident or mistake. You shouldn't judge an entire community because someone made a mistake. Which is more then likely the case here.

Thank you for your hard work in retrieving this bird! I'm sure the owner was beside himself.

It seems that you have a pretty strong opinion, but that it is not based upon a solid foundation. Falconers do not fly birds with tethers on. Allowing a falconry bird to get loose with a leash on is considered a "cardinal sin" by falconers. This was certainly an accident, and it happens so rarely as to be statistically insignificant. Do try to learn a little bit about something before irrationally and smugly condemning it.

Furthermore, it is entirely because of private falconers that the peregrine falcon even exists in the wild in the United States. They were extinct on the East Coast and down to two pairs in California. It was the falconry community that managed to successfully bring them back, notably due to the efforts of such falconers as Dr. James Rousch and Glenn Stewart.

Falconry is a worldwide institution reaching back through the millennia. It would be a shame to see this bit of human heritage be lost to time simply because ignorant people feel justified in deciding what others should and should not be allowed to do.

Thank you, Rebecca, for retrieving this bird and for getting it back to its falconer.