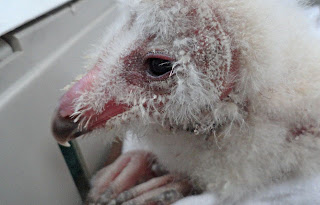 Another clutch of owls was blown from their treetop home this week. Residents discovered the chicks in their backyard, late Tuesday afternoon. There were six, altogether, but only four survived the fall from their nest, high in a palm tree.

Concerned for the welfare of the young owls, members of the Gomez family drove the chicks to the Humane Society of Silicon Valley in Milpitas, some 20 miles away.

The next morning the owlets were transferred to the Wildlife Center of Silicon Valley where they were examined by the wildlife hospital's veterinarian. Amazingly, only one chick had a minor injury that was treated. All four could be re-nested... but it was not going to be easy.

WES was called to assist.


Lead responder Duane Titus, an electrical contractor when he's not rescuing wildlife, brought a tall, heavy-duty ladder and an assortment of tools to attach a barn owl box to the tree, just below where the babies had fallen.

After about two hours, the box was ready for the owlets. One by one they were hoisted up and gently placed inside the box, on a bed of palm fibers. Check out the great video, below.


It was early evening when the team had finished. It was time to monitor the box to see if the parents could locate their babies. Jeanne Fouts, member of WCSV's Raptor Team, volunteered for the job of waiting and watching.

Within 45 minutes, one of the parents had landed on the box. By 10:00 PM, we had reports that one of the adults had popped its head inside the box. Another collaborative effort resulting in a successful family reunion!

A huge THANK YOU! to WCSV!

Also a huge THANK YOU! to the Gomez Family for rescuing the baby owls and for being so helpful with the reunion efforts.