Over the last few weeks, WES First Responders have been actively searching for two birds encumbered by manmade objects.The good and the bad of it - they are both flighted and seemingly in good condition, but very wary and difficult to get close to. Their skittishness is probably due to attempts by well-intentioned people trying to catch them.

The other problem we're having is locating them on a regular basis.
We need help.
Normally, we don't disclose the location of injured animals we're pursuing, but, in these two cases, we think it might actually help. We're looking to the birding community, wildlife photographers and members of the public for help in locating the birds and keeping people from harassing them.

One, is an adult Western gull that is still wearing an old radio transmitter attached by a harness.

We've confirmed the gull was part of a 2009 research project aimed at studying the impacts of gull predation on coho and steelhead salmon populations. 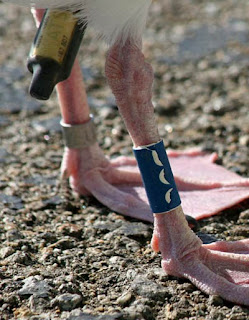 Two types of harnesses were used - neoprene and Teflon. They were supposed to weather and fall off the study subjects. Clearly, Teflon is tough!

The bird was first reported to WES on March 13th by a concerned citizen visiting the Santa Cruz Municipal Wharf. The antenna of the radio transmitter was sticking out through the feathers on either side of the bird, making it appear impaled. 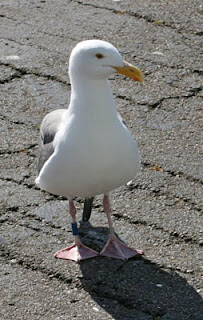 Our First Responders have spent hours looking for the gull. They've caught up with it a few times, but have not been able to coax it close enough to capture.
Our greatest dilema with this particular bird, however, is not its capture, but, ironically, tracking its whereabouts. We have yet to establish its pattern - when and where it can be found, on a daily basis.

It's been seen at the end of the Santa Cruz Municipal Wharf, but not always. We have a hunch it might loaf on the nearby beaches and at the mouth of the San Lorenzo River. The other bird we're trying to recover is a Canada goose that has a red plastic kite string winder attached to its wing.

The goose was initially reported last November when it was seen flying with other Canada geese near Radio Road in Redwood City, CA. We were never able to locate it after that.

It was reported to us again on April 12th by a birder who encountered it in the same area, near the South Bayside System Authority, at the end of Radio Road.

Although the goose has survived at least 6 months with the object attached to it's wing, it is clearly bothered by it - possibly even wounded, as the bird spends a good deal of time pecking and tugging at the bright red ornament.

Our newly recruited First Responder, Lindsay, has devoted quite a bit of time (and travel miles), trying to establish where the bird frequents and when. So far, the bird seems to fly in from the bay in the late afternoon, but not every day!

Twice now, WES' lead responder, Deanna "Goose Whisperer" Barth, has made the 82-mile (one way) journey to team up with Lindsay to get a "feel" for the bird's disposition and to see if a capture was possible.

The team tried various techniques to get the goose from the water and close enough to capture. At one point, Deanna had the goose within a couple of feet, but the bird never took its eyes off her.

Deanna's skill in capturing geese - by hand - is unmatched. She is the best, with a record of 9 for 9 in just a couple of years! Her success is due, in part, to her knowing when not to try and capture a bird, and the self-control it takes to hold back until she's certain.

After three hours, Deanna and Lindsay left the park - a bit frustrated, but happy to have gained a better understanding of the goose and the dynamics of the resident flock. "Getting to know your bird is a big part of it," Deanna said.

We are reaching out to the community for help in locating these birds. Please report sightings to rebecca (at) wildlifeservices.org or leave a message on our pager at 831-429-2323.

Please do not attempt to capture the birds. Not only will it interfere with our ongoing rescue efforts and make the birds more frightened of people, it is a violation of the federal Migratory Bird Treaty Act to pursue, capture or possess a wild migratory bird. WES is permitted through the U.S. Fish and Wildlife Service to rescue and transport injured migratory birds.

I realize this post is nearly a year old, but I just found it and figured I would try to contribute.
I am a graduate student and just finished a telemetry research project tracking gulls last year (Summer 2013). As researchers, harming our study animals is never our intent, but a certain amount of risk is always involved. Unfortunately one of my individuals became entangled in the harness and was picked up by some boaters off the coast of my study area on Lake Michigan. I got quite the earful from these concerned citizens.
As for catching the gull (if you're still after it), I'll provide a tip on how I captured and tagged my gulls. I baited them close using human snack foods. They love Cheese Puffs, actually. Once close enough I used a CO2 powered, hand-held, net gun called a Super Talon Net Launcher. They are quite expensive, but it worked very well. I borrowed mine from the USDA Wildlife Services in MI. Even if this doesn't help in this particular case anymore, keep it in mind. That net launcher works wonders at capturing birds safely.