Baby quail down the drain 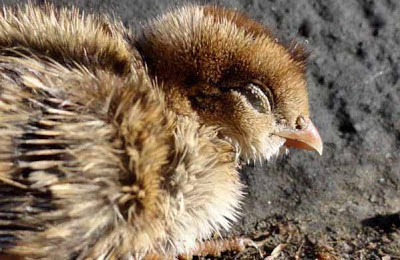 Late this afternoon, WES received a call from a resident of Woods Cove. She had come home to find adult quail circling a storm drain. On closer inspection, she could hear peeps from quail chicks that had fallen through the grate and down about 10'.

Duane and Rebecca responded immediately. By the time they arrived, the peeping had stopped. They feared the worst - baby quail cannot survive long in a cold environment.

Duane pulled up the heavy metal grate and descended into the drain. He quickly discovered one chick, still breathing, but barely alive. Another, cold and lifeless, moved its leg when Duane scooped it up.

Further inside the drainage system, Duane discovered 6 chicks in puddled water - dead, and one other, just barely alive. 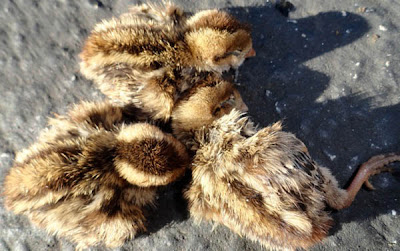 The closest, most constant source of heat, was the road's blacktop. Rebecca placed the cold bodies in a patch of sun on the pavement, and waited for signs of improvement.

Amazingly, within 10 minutes, all three chicks were opening their eyes. A few minutes later, one of them, the strongest, was trying to stand. It looked like they'd be stable enough to transport to the wildlife hospital, but not strong enough to reunite with their parents.


The homeowner, Brenda, was very kind and supportive in the efforts to save the days-old chicks. She assisted in microwaving dry rice to keep the babies warm during the 20 minute drive.

All three chicks survived the transport and were handed over to Native Animal Rescue in Santa Cruz.

UPDATE 6-13-13: We were told the chicks survived the night and were introduced to an adult male California quail in care at the facility, and that he readily took them in.

Great story! Sure glad some of these fragile little ones survived.
Sandy

The update makes it a Father's Day story!

Bless your hearts Duane and Rebecca