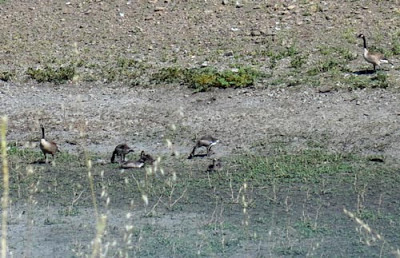 Thursday morning, Wendy was aboard a northbound train out of Gilroy, headed for work in Palo Alto. She was looking out the window, admiring the open fields of the Coyote Valley, when she happened to notice a family of Canada geese - two adults with five half-grown goslings inside a fenced-off catch-basin that once held water, but was now dry- no water anywhere on the near 2.5 acre plot, just a muddy spot where the geese were standing. She saw them again, in the same spot, on her commute home.

Wendy thought it was odd for the family of geese to be there, where there was no water, so she drove back that evening to investigate. Here's Wendy's account of what happened next: 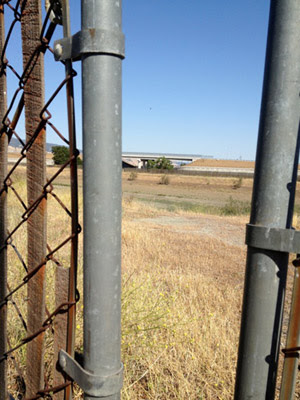 Once I got off the train, I drove back to investigate.

Yes, indeed, the perimeter fence had no openings where they could pass through. The dirt was dry and the grasses had withered. There wasn't much for them to eat, and not a drop of water.

As I watched through the fence, the goslings followed the parents around where water once was, pecking at the ground. They'd lie down a few seconds then repeat, peck/lie down. I knew I had to do something.


The following day I began what I expected to be (from past experience) a vast number of calls searching in search of help. Bear with me...

I first called the local wildlife center in Morgan Hill. They're response was, "We don't do ducks and geese, call animal control," so, I called animal control, which was also the Morgan Hill Police Department, and had the dispatcher abbreviate our short conversation to respond to a 911 call, rightfully so. I called back 1.5 hours later and, was told the city no longer offered animal control services due to a shortage of funding. So I called South County Animal Control, which routed me to the Santa Clara County Animal Shelter in San Martin. They gave me the number for Animal Control, which routed me back to Morgan Hill Police. Then I called the Wildlife Center of Silicon Valley, where they told me they only take in wildlife that is injured,... they don't do rescues... HOWEVER, they referred me to a woman named Rebecca with Wildlife Emergency Services, in Moss Landing.

That's when I called WES and left a message. Rebecca returned my call promptly. Since the geese were behind a locked gate and on city-owned land, she said she'd alert a warden in the area, and see if he was available to check it out firsthand.

It wasn't long before Wildlife Officer Tyson Quintal with the California Department of Fish and Wildlife called me for details, and said he'd assess the situation.

After seeing them for himself, he seemed to agree the birds might not be getting in and out, so he said he'd talk with Rebecca and make some arrangements for their release.

The next day, Rebecca and her team from the Monterey area arrived at about 3:00 PM. Next to arrive was Wildlife Officer Tyson Quintal and another Wildlife Officer, then two units from the Morgan Hill Police.
The gate was unlocked and Rebecca orchestrated the gentle herding of the geese through the open gate. I have never seen a rescue plan at this point executed more flawlessly. The following video is witness to that, and one might say it's rather unremarkable, but the back story to get to that moment was an ordeal, to say the least.


As all 7 birds ran out the gate, not a feather lost..... I was elated with the pay-off of my perseverance,... then disheartened to think of how many other well-intentioned people have faced similar situations, and in their attempts to do the right thing, have given up before finding the right organization or that person in authority, willing to take action before the animal dies.

I know in the future who I will call first, and lend my physical and financial support to... Wildlife Emergency Services.


MANY THANKS TO WENDY FOR CARING ENOUGH TO FIND HELP! MANY THANKS TO THE CALIFORNIA DEPARTMENT OF FISH AND WILDLIFE AND MORGAN HILL POLICE OFFICERS WHO HELPED MAKE THIS RESCUE A SUCCESS!

Thank you Wendy! I am shocked at how many people don't think helping these birds is important! Especially this time of year when they are grounded with babies and no primary flight feathers because they molt now. Thank you for your persistence.

Rebecca and WES to the rescue again. So glad you were available. Poor birds. So glad you, your Husband and WES are around. Norma Campbell, Injured & Orphaned Wildlife, Campbell, Cal

Getting help in these situations can be fustrating to say the least. The geese are very thankful you came to their rescue.

Thank you so much for helping these geese Wendy! I applaud the people who went out there too for rescuing those geese. Here in my state of NJ, all they want to do is slaughter the geese. This is what we are up against...they are at it again this year, as well as killing hundreds of them last year. Thank God for the people who do care about waterfowl!

After call from one department after another, I am happy that these geese were saved. Most would let them die. BRAVO!!

Wendy,
You are my hero and obviously a lover of animals and wildlife.

I hope there was a safe place for them to go once they were out... looks like an office area they were heading off into...

We need volunteers with Wendy's tenacity. It takes great patience and persistance for most of these rescues to be successful. Look forward to meeting her, and maybe even working with her in the future. Excellent job!

Thankyou thankyou; the poor parents probably thought when there was water there it would be a safe place to raise the goslings. But then the water dried up and they were stuck. I am so thankful whenever I read a story like this that there are people out there who will notice and do what it takes to rescue any animal.

thanks for showing kindness wendy