Deanna Barth is one of WES' lead responders, and an expert when it comes to capturing waterfowl and marine birds. She gained much of her experience by going out on her own, looking for injured birds, or, as we like to call it - "making her rounds", which she does after work, about once a week.

This week, Deanna responded to a call we'd received about a duck with a fishing hook injury at Westlake Park in Santa Cruz. Here is her firsthand account: 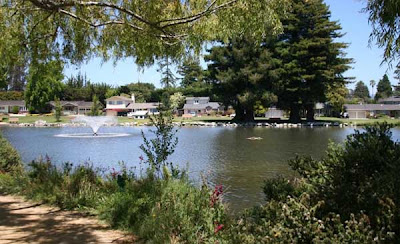 I arrived at Westlake Park, and from my vehicle I could see that there were no waterfowl on the water, but several groups of ducks surrounded the lake, all resting in the shade of the trees.

Baiting them all in would cause a feeding frenzy and make it very difficult for me to separate the injured one for capture, so with only my camera in hand, I began walking slowly around the lake.

I approached each duck with just enough pressure to cause it to stand, and checked for obvious entanglements.

One by one, they stood and then sat back down as I passed.

After about 30 minutes, and having found none that was injured, I paused to admire the beauty of the area.

A barking dog from across the way caught my attention. When I looked, I realized there were ducks resting in the front yards of the surrounding homes. 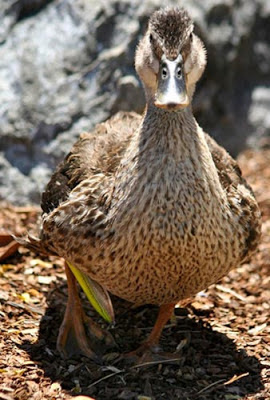 I crossed the street and began assessing the ducks, when I spotted the hen in trouble. She was resting under a shrub next to her mate - just the two of them, alone.
I went back to my vehicle for my net and crumbles.

As I approached, she anxiously hobbled towards me - a large fishing lure hanging from her right leg. I set my net down, tossed a handful of crumbles near the hoop, and with her attention on the food, I flipped the net over her. Mission accomplished!

Her mate watched as I loaded her into my vehicle for transfer to Native Animal Rescue on 17th Avenue.

There, at the wildlife hospital, the hook was removed and the hen was given a thorough examination. They said her prognosis was good, so hopefully she can be reunited with her mate after a course of antibiotics. 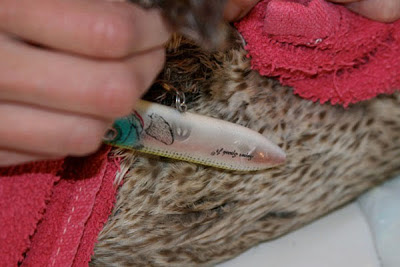