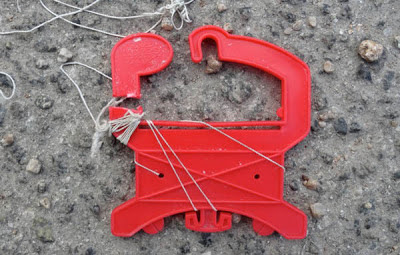 We have VERY exciting news to report. The goose with the red kite-string winder on its wing has been captured, and the plastic removed!!!!

This was one of WES' longest running rescues, spanning two months.

The goose was initially reported to us last November. It was observed at the end of Radio Road in Redwood City, but we were never able to locate it. Then, on April 12th, it was observed again, in the same area.

What made this rescue so difficult was the bird's temperament - it was very skittish and wary of approach, probably from being pursued by others.

We needed to establish a relationship with the bird for our capture strategies to be successful.
However, the bird was unpredictable. We could never count on the goose being where we thought it would be - a real issue with our capture specialists living 80 miles south.

Thankfully, one of our newest recruits, Lindsay Marshall, lives nearby.

Lindsay devoted hours upon hours, scouting for the bird. When she found the goose, she'd spend time working on building its confidence - trust, that it would not be lunged at or grabbed after.

When she'd made some progress, our goose expert, Deanna Barth, joined her in the field to get a "feel" for the bird's disposition and to see if a capture was possible. Deanna is especially skilled at capturing geese - by hand!

On the first day, the goose never showed up. On her second visit, Deanna had the goose within a couple of feet, but the bird never took its eyes off her.

Two weeks ago, the goose showed up near Catamaran Park in Foster City. Lindsay responded quickly and noticed the goose was missing its flight feathers - she was molting.

Canada geese shed their outer wing feathers, annually, about this time of year. She would be flightless for weeks. Even, so, we would approach her capture in the same way we would if she were flighted.

Lindsay continued to build a relationship with the goose, visiting the area regularly.

We planned a capture attempt for May 31st, but that coincided with an arts and wine festival at the park, so we were forced to postpone the mission.

Today, was the soonest Deanna could be available. She left from work in Carmel, and made the two-hour drive to Foster City, rendezvousing with Lindsay at Catamaran Park.

Within seconds, they spotted the goose. It was grazing within a flock of Canada geese. 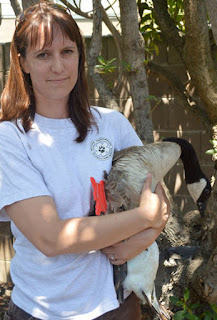 Together, Lindsay and Deanna worked the birds. Lindsay intrigued the flock with a bag of crumbles, while Deanna read the target bird's behavior, testing its sensitivity to approach. She was surprised - the goose actually let her to get behind and between it and the water. A good sign.

They kept working the birds. Lindsay held the attention of the bigger, more aggressive birds to one side, while applying pressure on the target bird to position it on Deanna's right, for her drop.

Finally, the goose was in position, and Deanna dropped.

The struggle began. Webbed feet flailing, wings beating, the bird fought fiercely, but Deanna had her.

They covered the bird's head to reduce visual stress, and walked to her to the rescue vehicle where they clipped off the thick plastic winder and kite string.

Surprisingly, there was no damage to the wing - none whatsoever! 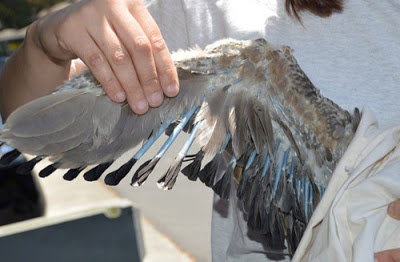 Deanna did a very quick, once-over exam and then set her free.

We will never know exactly how this goose came to have a plastic kite-string winder on its wing - whether it was a chance accident, or whether someone intentionally clipped it to the bird. What we do know, is that plastic litter and line can be disastrous for wildlife.

Please, help wildlife by picking up and disposing of plastic debris and errant line or string whenever possible.

CONGRATULATIONS TO LINDSAY AND DEANNA FOR THEIR SUCCESSFUL CAPTURE!!!!!

Lindsay & Deanna----you are awesome! Thanks for not giving up.
Elaine

Congratulations! That's great news all around.

Beautiful, I just love happy ending and this was a blessing ♥