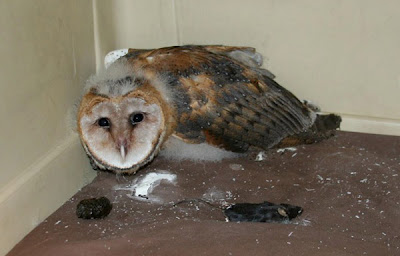 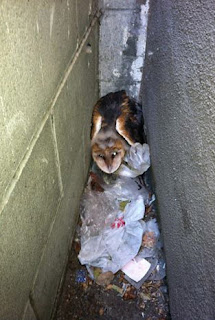 It was close to 5:00 pm on Friday evening and I was making my way home from a wildlife call in Santa Cruz, when I was notified of a barn owl chick in trouble in Hollister, CA. It had been found on the ground, hiding between two walls in an industrial part of town.

With no wildlife rescue organization or wildlife hospital nearby (the Nan Pipestem Wildlife Rehabilitation Center closed recently), there are few resources for wild animals in distress and the people who find them.

Thankfully, Anna Patterson of the Hollister City Animal Shelter responded to the call and delivered the owl to a local veterinary clinic for evaluation.

The barn owl was examined and found to be in good shape, just young. Unfortunately, the clinic was due to close before I could arrive, so they agreed to feed and house it overnight.

I went to the parking lot where the owlet was found to see if I could locate its nest. White excrement and scattered owl pellets on the cement directly beneath a drain in the wall, about 25' high, gave it away. 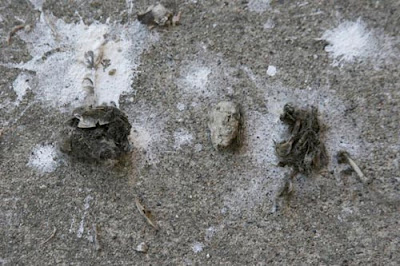 I had a pretty good feeling that this is where the young owl had fallen from, but I wanted to be sure it was an active nest, so I went home and returned about three hours later, after dark. I stood beneath the drain and played a barn owl call on my iPhone. Within seconds I heard a return call from within. Yes!!! I had my daughter with me and she was really excited to hear the call. 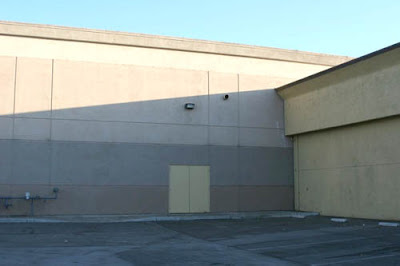 The next morning I drove to the veterinary office to pick up the little owl. It had been housed near barking dogs and there would be a lot of human activity so I wanted to get it out of that environment for the day until we could re-nest it. I planned to attempt the reunion later in the evening, when there would be less activity in the parking lot by the nest. 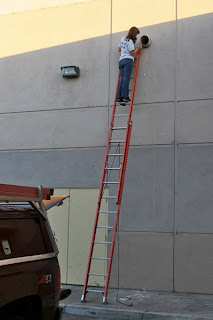 My daughter and husband joined me in this exciting adventure. After my husband’s help placing the extension ladder, I made my way up to the hole and got my first peek inside the drain. To my surprise, there was a 90 degree angle in the pipe, not far inside. I could not see anything inside other than feathers and remnants of earlier meals. 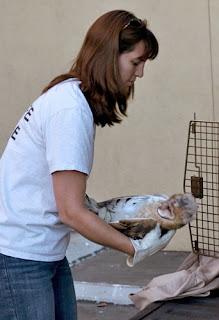 Back on the ground, I took the owlet out of the crate and placed a pillow case over its head to reduce stress, then I slowly made my way back up the ladder.

At the top, I removed the pillow case and gently placed the owl just inside the opening. It ran into the drain, turned the corner and then I heard loud hissing and screeching.  There was at least one other owlet in there, perhaps two. 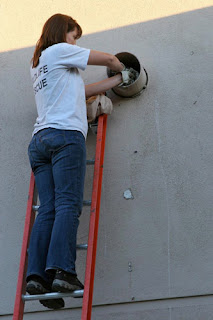 This chatter echoed in the drain. Even my husband and daughter could hear it clearly from below. This went on for several minutes and we all laughed at the thought of the siblings not being so happy about this ones return!  Hopefully this time it will stay put.

For peace of mind, I went back the following morning and was happy not to see an owlet on the ground. Success!

I have been a first responder with WES for a couple of years now, and this was my first solo re-nesting. I feel really good about it - like I've "flown from the nest" myself!

Congratulations, Deanna, and may you have many more opportunities to continue your great work!

Great dedication, glad to know there are people like you and your family out there.
Dave

Thank you to everyone for the kind words! As much joy as I get from helping wildlife, I get even greater joy from hearing my 7 year-old say she wants to save animals when she grows up. :-) Setting the example for the next generation - that's what it's all about.