Friday rounds and a Saturday rescue

Yesterday, I spent about 3 hours at Monterey Fisherman’s Wharf, watching the fishing boats come in, with pelicans following closely behind. I'd been checking weekly, anxiously awaiting their arrival. This was the first time to see a good number of birds.

About this time each year we experience an influx of pelicans along the coast - mostly the young-of-the-year, just fledged from pelican rookeries on the channel Islands off Southern California and in Mexico. It's also the time of year we see an increase in the ill and injured.

I like to routinely visit the hot spots, the wharfs and jetties, to look for ones in trouble. 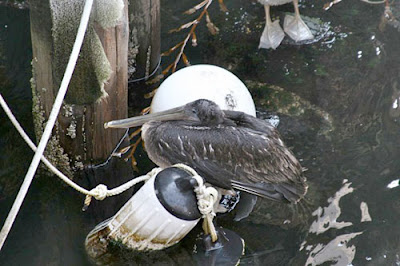 Today, there were about twenty pelicans at the wharf. One bird appeared to be covered in fish oil (from the processing plant), but it never came close enough for me to attempt a capture. I left the wharf empty-handed.

Early this morning, however, I received a call from our director, informing me of a grounded pelican in Hollister, just 15 minutes from my house - I couldn't believe it! That's more than 20 miles inland, as the pelican flies.


According to the reporting party, the young brown pelican had landed in one of the large trees in their front yard off Fairview, sometime late yesterday. It fell out of the tree, toppled onto their boat and down onto the ground this morning. That's when she called.

As she made numerous calls to find help, no one believed her, she said. Granted, she'd never seen a pelican in real life, but said she knew right away it was a pelican of some kind from seeing the movie Finding Nemo. She was spot on. 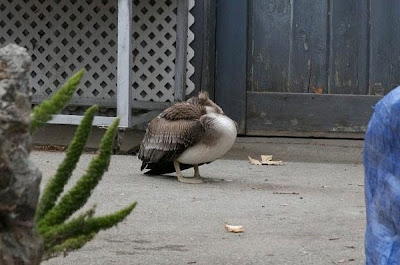 I threw on my rescue attire, and was on scene in minutes. When I got there, the bird was standing, resting, with its head tucked between its wings. It appeared thin and weak.

I figured I could probably walk right up to it and simply pick it up, but I’ve learned to never assume a rescue is going to be that easy. I have learned to prepare for the unexpected, always.

So, with ridiculously long-handled net in hand, I crouched behind the small boat in the driveway, and, while keeping completely out of view of the bird, I crept into position. Like I would do with a very fit bird, I then sprang forward in a flash to catch the bird off guard. The pelican never moved. I set down my net and scooped the poor animal into my arms. 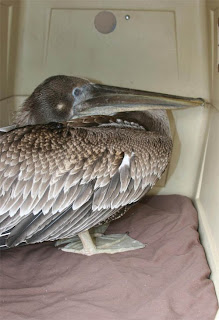 I placed the pelican in a crate, drove home for a quick shower, then transferred it to the Wildlife Center of Silicon Valley, where it will be examined and stabilized before being sent for long-term rehabilitation at aquatic bird specialists, International Bird Rescue, in Cordelia, CA.