The Marmot of Bernal Heights has been captured! At least we think so...

Late Wednesday, WES received a call from a San Francisco Animal Control Officer. He was looking for some help in identifying what he very accurately described as looking like a mix between a ground squirrel and a prairie dog. That would be a marmot, the largest of the Marmotinis, or ground squirrel tribe.

Found in alpine meadows and grasslands above 6,000', yellow-bellied marmots are notorious for stowing away in car engine compartments of unsuspecting visitors and hitching rides to lower elevations.

According to eye-witnesses, the marmot popped out from under the hood of someone's car Wednesday afternoon and ran onto the playground of the Alvarado Elementary School. The man whose car it was mentioned he had driven from the Mission District, about half a mile from where the Bernal Heights marmot was seen last. 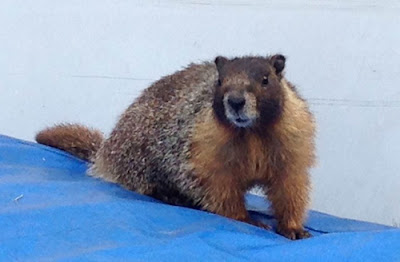 Since June 26th, WES has been in pursuit of a yellow-bellied marmot in the Bernal Heights neighborhood. Up until about three weeks ago, when sightings stopped, the marmot had been seen fairly regularly in the backyards of homes on Bocana Street. Although we were not successful in capturing the large rodent, its presence captured the attention of the community - it even has its own Twitter account - Bernal Marmot (quite entertaining). 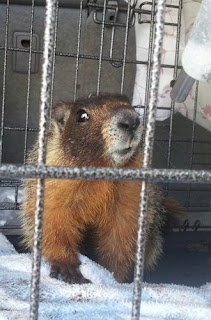 After reviewing photographs and behavior, we do believe the animal captured by San Francisco Animal Control is, indeed, the Bernal Heights' marmot.

On Thursday morning, one of our responders, Ken, transported the marmot from the animal shelter to the Wildlife Center of Silicon Valley where it was given a thorough examination. The exam revealed it to be a young female, weighing almost 4 1/2 pounds, wriggly, and in excellent physical condition. She was good to go, but where exactly?

Thanks to the media coverage back in June, we received a few good leads on where the marmot may have come from. One, in particular, seemed most likely. Everything fit - the dates, time, location. We believe the marmot hitched a ride from Yosemite National Park.

We contacted the California Department of Fish and Wildlife for authorization to return the animal to the wild, then connected with Park authorities and received their blessing for the animal's return. 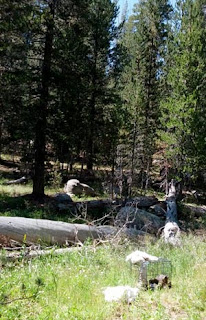 Thanks to one of our wonderful responders, Akira, who volunteered to make the 431-mile journey there and back, the little whistle-pig was returned home today. She was released at White Wolf Campground at about 3:00 PM.


THANK YOU SAN FRANCISCO ANIMAL CONTROL!
THANK YOU WILDLIFE CENTER OF SILICON VALLEY!
THANK YOU KEN, AND THANK YOU AKIRA! 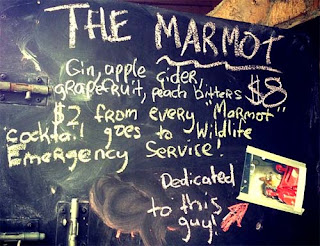 A special Thank You to the Rock Bar in San Francisco for helping celebrate the repatriation of the marmot to her home and for helping raise funds to offset her "travel" expenses. This evening from 4:00 - 9:00 PM, they served up a special cocktail, The Marmot, donating $2.00 of each one sold.