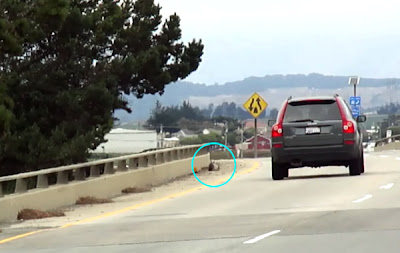 This afternoon, WES received a report of a California brown pelican on the Cabrillo Highway where it crosses over Highway 156. The reporting party, Matt, was traveling northbound and noticed the bird sitting on the shoulder of the bridge. He gave an excellent description - that the bird appeared alive, its head was up, and its wings were tucked normally.

The California Highway Patrol was alerted of the situation. Officer Yerace was on scene when our first responder arrived.

After a quick assessment and briefing, Officer Yerace circled back to run a traffic break for our rescuer.

On approach, the bird was quiet and alert, and easily netted. 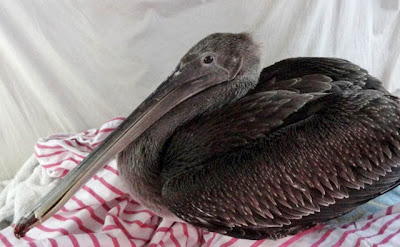 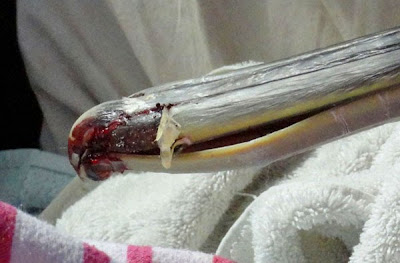 We believe the bird was flying low over the highway when it was struck by a vehicle. It sustained a severe injury to its bill, but appeared to be in pretty good shape, considering. The injuries from this accident, however, may not be the worst of its problems.

This is a very young pelican - only a few months, and its body condition was somewhat poor, meaning, it may have something else wrong. It just might be one of the many hatch-year birds that is failing to thrive. Survival of the fittest at work.

With luck, this young bird will recover from its injuries to have a second chance at survival.

Overall, it seems to be a good year for brown pelicans along the California Coast. Quite different than last year, when hundreds of starving young pelicans were being found up and down the coast. They would flock to piers and fish cleaning stations looking for food and wind up in trouble.

Last year, International Bird Rescue, which operates two of the largest aquatic bird facilities in California, treated about 951 pelicans - 600 were starving young of the year.


Thank you Matt for taking the time to call about this poor bird!


UPDATE 8-10-13: We just learned the young bird did not make it. As feared, it was a very weak individual, not destined to survive.