This afternoon at about 3:00, we received a message from a caller reporting a pelican off West Cliff, in Santa Cruz. She said the pelican was about maybe 50 yards offshore.


"He's been in that water for two hours, by himself, and either he has a broken wing or he's caught in seaweed, or something, but he's not going with the current - he seems to be staying put."

It sounded like another pelican entangled in line and caught on kelp.

There's something about this particular area. This is the 3rd pelican (that we know about) that's gotten tangled in line and kelp off West Cliff.

The first one, was rescued by two, very brave, surfers (link to story and video). The second one, found earlier this year, was not so fortunate - help did not come in time.


It's very difficult to find help for wildlife in distress offshore, and there wasn't much time left in the day. I asked Jeanne, the reporting party, if she knew any surfers.

She did. She called her friend Niko.

Niko, 43, works an office job by day but is an avid surfer. She loves the ocean and sea life, and is especially fond of pelicans. She'd just gotten off work when she called for more information about the bird.

I made it very clear that we were not asking her to go out into the water to rescue the bird, but, if she did, here's what to expect.


The bird is probably snagged by a hook and tangled in fishing line and snagged on a piece of kelp. As you approach, the bird will probably try to get away from you, and as you get close, it might turn and face you. It might even hiss and strike, so be ready to shield your face with your arm. A pelican's bill has little downward force - no crushing power, but the hook at the tip can definitely break skin.

I was a bit surprised that Niko wasn't as concerned about handling the bird as she was about what to do with it once she had it out of the water. That's confidence for you!

I told her about the bed sheet trick. In emergency situations, when there's no suitable carrier, a sheet can be used as a barrier between the front and rear compartments of a car.

When Niko arrived on scene, the pelican was still there, floating just beyond the break. She donned her wetsuit, slipped a pair of scissors inside the leg of her suit, and headed out.

As she approached the bird, she maneuvered behind it, causing the bird to paddle toward shore. That's when she saw the line wrapped around its left wing. She used the scissors to cut the line. The bird was free, but so tangled that it could not fly.

Niko started herding it to shore.

Once on land, she bundled the pelican into her arms, facing its head behind her, and proceeded up the hillside to her Jeep.

After placing pelican in the back of the vehicle, she stretched the sheet between the rear doors to keep it confined during transport to Native Animal Rescue (NAR). 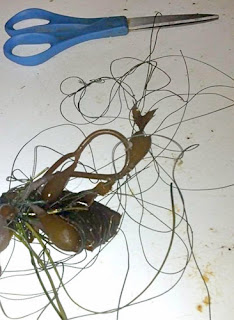 At NAR, Niko got to help unwrap the line from the bird's wings.

On Saturday, the pelican will be transported to seabird specialists, International Bird Rescue, in Cordelia for treatment of the injured wing.

THANK YOU JEANNE AND NIKO!!!
YOU SAVED THIS PELICAN'S LIFE!

I want to say thank you as well. I have caught hawks injured on land before and it was hard enough to control them. I can't image myself going into the water to save a large pelican. Great story and glad to know there are those out there that care so much. Thank you Niko and Jeanne. Dave Harper

It really is great to know that people can be called upon to help injured wildlife. It warms my heart and renews my hope for the world. Thank YOU Niko!

Thank you Niko for this exceptional rescue -- and so true, what courage in the way you handled this situation, with barely a hitch. Rebecca -- which larger birds can be transported using the bed sheet trick? We have a smaller sedan right now, and have found ourselves in a fix a few times with larger animals (Great Blue Heron) and no way to store a big carrier in the car for such emergencies.

Yes! Thank you to Niko and to all involved in this bird's rehabilitation! It is so gratifying to know that among the dog fighters and other sadness there is heroism where our wild friends are concerned!