Another skunk stuck in a fence... 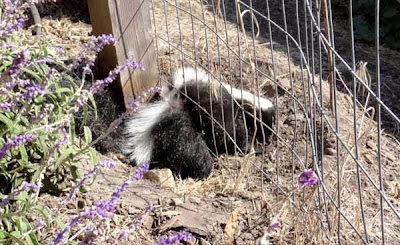 Fattened up for winter, an adult skunk managed to get only its front half through a welded wire fence before getting stuck at the hips.

On scene, responders found the skunk barely responsive - eyes open "staring into space" - in shock. It had probably struggled through the night.

Wild animals can experience something called exertional or capture myopathy. Its cause and treatment is described very well, HERE.

Responders acted quickly. It took only one snip to free it, but the animal was in serious condition.

Its limp body was pulled from the fence and placed inside a shaded carrier. Using a syringe, rescuers offered the skunk a cold electrolyte solution, but it needed more.

The skunk was delivered to skunk expert, Monique, for further treatment. 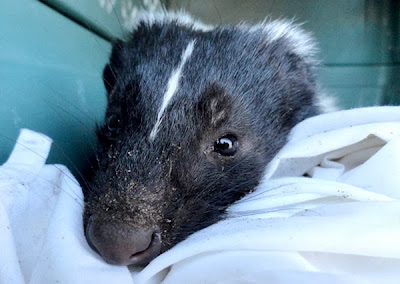 Amazingly, that afternoon, the skunk recovered from its ordeal enough to stand and threat-display. After a full day of rest, it could be released.

Check out the video of its rescue: