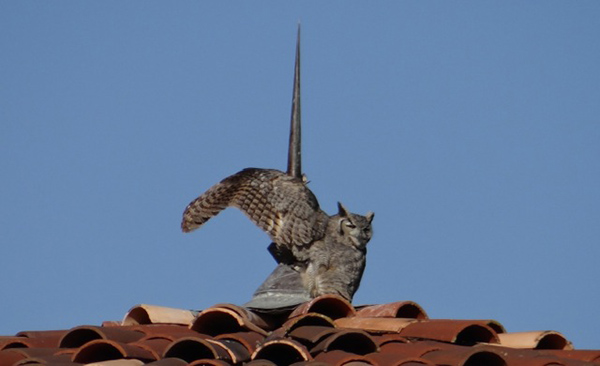 It was the morning before Christmas when WES received a call from a local Wildlife Officer with the Department of Fish and Wildlife. He was responding to an incident in Morgan Hill involving an owl stuck on a roof, possibly impaled. Duane and Rebecca responded to assist. 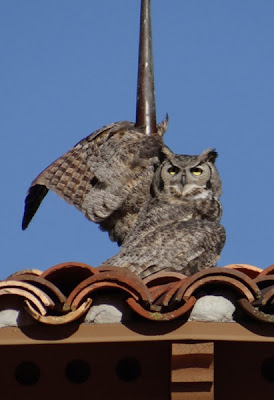 On scene, they found a great horned owl impaled on the spire of a large two-story home.

Somehow, in a freak accident, the pointed conical shaped structure pierced the owl's left wing through, what would be the forearm on a human - the radius and ulna.

According to the homeowner had heard noises on the rooftop the day before, but thought it was coming from the attic. We believe the owl had been stuck for at least a day.

Duane used a ladder to access the roof, and carefully made his way across the clay tiles.

As he neared the owl, he noticed the fresh carcass of an American coot. The owl's last kill. There were bones nearby, too, indicating the tower was frequently used by predatory birds.

We believe the owl was landing on the tower to consume the coot, when the bizarre accident happened - on a downward flap, the spire pierced its wing.

Duane gently lifted the raptor up and off the sharp pinnacle, and, with help from the warden, he placed the bird inside a dark sack to keep it quiet and calm. Check out the rescue video: 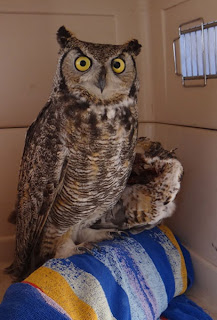 The owl was placed inside a transport carrier and quickly delivered to the Wildlife Center of Silicon Valley.

The bird was seen immediately, but, unfortunately, the injuries were too severe. In struggling to get free, the owl dislocated its shoulder and there was a tremendous amount of tissue damage. The owl was euthanized.

The homeowners have plans to attach a ball to the point of the spire so this never happens again.

I believe with this footage you could get the city of Morgan Hill, Gilroy etc to pass a building code that all roofs should be spireless or have a ball on the spirre as these hoeowners plan to do. TERRIFIC RESCUE Norma Campbell, President Injured & Orphaned Wildlife

Another freak tragedy. I'm heartsick that this magnificent owl could not be saved.

Oh thank you for being there for this poor poor bird. This hurts my heart. But I'm glad he is no longer suffering.

Great work in rescuing but what a very sad ending.