THIS RESCUE WAS SPONSORED BY ROBERT RUSH. THANK YOU ROBERT!

About three months ago, a great blue heron with fishing line tangled around its foot was spotted along the bank of the Los Angeles River, just north of downtown Los Angeles.

With no dedicated wildlife rescue service in the Los Angeles area, it took until now for this bird to be rescued, thanks to the efforts of a few concerned citizens and Wildlife Emergency Services.

Grove Pashley tells the story of its rescue:

I grew up and lived in Utah until I was 27 where, as a kid, I enjoyed ponds, lakes, streams and rivers; basically my backyard. I had a Tom Sawyer life, no doubt.

When I moved to Los Angeles in the mid-80's, I had pretty much left that life behind, until, 8 years ago, when I discovered the Los Angeles River and its slowly re-emerging wildlife in a section known as the Glendale Narrows.


A few years ago, I was fortunate enough to find and purchase waterfront property where I would have an excellent view of the many indigenous birds that also made their home along the river - cormorants, snowy egrets, great egrets, kingfishers, mallards, American coots, redtailed hawks, cinnamon teal, killdeer, black-necked stilts and, of course, the iconic bird of the Los Angeles River - the great blue heron.

I hadn't lived there a year before a mated pair of Canada geese started appearing daily. I quickly discovered one had a fish hook in its mouth and fishing line wrapped around its leg.

I had never, until that time, encountered this kind of situation - an injured wild bird. What to do?

I made several phone calls, to no avail.

I continued to see the two geese together, but the injury worsened until the one goose could barely walk. One day, it was gone. I can only assume the bird did not survive, leaving its lifetime mate alone. I wish I could have done more.

A second situation came about this past summer, when I discovered a cormorant also wrapped in fishing line. Same calls. Same results. I was cautioned against attempting to capture the birds myself and leave it to professionals, but where were these professionals? Frustration mounted.

Then, about three months ago, I discovered that the majestic great blue heron - the one that had graced the shores of this river, was the latest victim of errant fishing line.

I knew this bird well. I saw him daily and photographed him numerous times, but now he limped. I could see fishing line around his right foot and digits. It didn't seem severe at first, so my initial thought was that, hopefully, it would work its way off. What could I do anyway? I'm not a 'professional'.

Weeks passed and the limping worsened. The great bird now looked weak and haggard. I knew if the heron was to be saved, it was going to take a greater effort on my part.

The first step would be to make sure the bird was getting enough food, so I purchased fresh smelt from the local Thai market, and tossed them onto the embankment where the heron perched. He ate them, readily.

He would come each and every morning - the same place at the same time.

Eventually, the heron's health seemed to improve. He looked brighter and more active, but I knew his foot needed treatment, desperately.

Again, I made phone calls looking for someone to help capture the bird, only to be referred back and forth from one agency or organization to another.

With nowhere to turn, I started to take my own steps to see if I could capture the bird myself. It was an intimidating situation, but my mind was made up. I had to do something.

I bought some supplies and built a type of drop net trap. My friend, Kathy Bakken, helped.

Our first attempt was part success, part failure. I was able to lure the bird underneath the net, but it wasn't weighted down enough and the heron got free and flew off. Crestfallen, I started planning my next attempt.

Since the heron would not be fooled by this technique again, Kathy and I took to the Internet to research other ways to capture flighted birds. A net gun seemed like a fast and safe method. We came up with a gun that used CO2 cartridges to deploy a large panel of netting.

Before we went any further, though, I really wanted to find someone with more experience who could, if nothing else, advise us. I reached out to Friends of the Los Angeles River (FOLAR). Through FOLAR I was put into contact with an Audubon bird expert, Dave Weeshoff. He expressed concern about using a net gun, and said I should contact wildlife capture expert, Rebecca Dmytryk, who runs Wildlife Emergency Services (WES).

I immediately placed the call and left a message for Rebecca, and, in just minutes, she called me back. I was so relieved to finally speak with someone who, not only knew how to capture this bird, but had enthusiasm for the task.

Rebecca and I discussed capture options. Having fed the heron for nearly 4 weeks, I was confident I could get the bird where we needed him. Even so, Rebecca explained that we should keep the net gun as a last resort - that there was too high a chance we'd miss and scare him off for good. Instead, she suggested we try a single noose of fishing line to snare the bird's foot. Oh, the irony of capturing him using fishing line!


Over the next few I collected the supplies I needed for the snare. I practiced making nooses and setting up the equipment. I also practiced firing the net gun, just in case.

On Monday, Rebecca called and said she had a last-minute change in plans and would be returning to Los Angeles for a few days. The heron's life depended on us being successful, so I was happy she'd be there to help.

It was pre-dawn on Thursday, December 18th when Dmytryk pulled up to Pashley's home on the river.

Over coffee, they worked through the capture plan one more time, making a few adjustments to the single snare.

At first light, they set up the capture site, laying out a single noose. Two of Grove's friends arrived shortly, Agnieszka and Steve. They would direct foot traffic on the bike path, keeping people from stopping and scaring off the heron.

Rebecca tells the rest of the story:

Grove had purchased a couple different types of heavy-duty fishing line for the noose. At first, I was a little skeptical of the waxed fabric line until I played with it. It didn't have the 'memory' the monofilament line did, which tends to cause the line to coil back up.

I made a noose from the new material and fastened it to the end of a very long willow branch I'd brought from home. Together, Grove and I set the noose. We elevated it a few inches using earthquake putty and sticks - a bit odd looking, but it should work.

Yep, it should work, if... If the bird doesn't see me as a threat, if we can draw it near by tossing fish, but not too many fish, if it steps directly into the noose, if the bird doesn't step on the hoop, knocking it loose,... there were so many things that could cause us to fail, but we had to keep positive and try our very best. That's what it comes down to in rescuing wildlife - you have to think it through and do what it takes to have the greatest chance of success.

It was about 6:30. The heron hadn't shown up yet. I donned the ghillie suit and tucked up under a bushy young tree just below the bike path. Steve helped cover my legs with sticks and leaves to break up my form even more.

I took the line that formed the noose and attached to the willow, and made another noose at the other end, securing it to my right wrist. I drew up the slack, took hold of the willow, stacked my spine and settled in. I'd have to remain motionless, and it could be hours before the bird stepped into the noose.

Finally, the heron was spotted upstream. Grove took his position in his backyard where the heron is used to seeing him.

Grove called out the bird's position, as my vision through the suit was limited to the noose, and little else.

The heron landed on the river bank just below me. Grove tossed a fish to entice it closer.

For an hour, the bird came and went, picking up a fish or two, then flying off. At one point, Steve had to pressure the bird from its spot upstream with the hope it would land closer. It did.

Through the mask, I saw the impressive shadow as the great bird landed. As it made its way up the cement embankment, I caught a glimpse of its feet. Grove tossed another fish, then another, higher up, closer.

The bird spied the pile of smelt on the opposite side of the noose. It limped closer. I felt my heart rate speed up - my breathing, accelerate. I kept repeating to myself, in my head,... hold, hold, hold, hold for the leg, wait for it to be in the center of the noose...

The heron stepped into the noose with its bad leg. Not what I'd wanted.

It stretched its long neck to reach one of the smelt, then it took another step.

It drew its good foot up, and into the snare, lighting only for a split second - wings readying for flight as it grabbed for another fish. I thought to take chance - I had nothing to lose, and probably only this one good shot. I snapped the willow up and out.

The heron was in the air. My vision obscured, I had no idea I'd snared the bird until I felt the tension on my wrist - we had him.

Still limited in what I could see through the suit, I kept tension on the line and collected the line, drawing the bird toward me. Grove, Steve and Agnieszka raced to my side and helped me secure the bird's head and wings.


The heron was placed inside a large, ventilated cardboard box for transport to aquatic bird specialists, International Bird Rescue located in San Pedro. Grove volunteered to make the long drive. 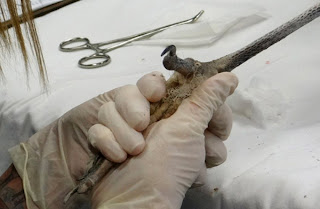 Once at the hospital the bird was given a quick exam and then allowed to rest before having the line removed. 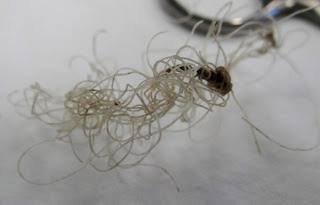 Examination of the injured foot revealed a deep wound, almost cutting off one of its digits. Radiographs would be taken to determine the extent of infection, which could be in the bone. It did not look good. 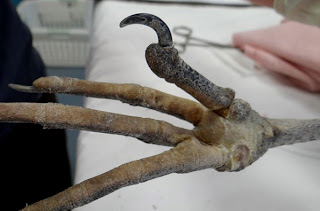 The tangle of monofilament line that was removed was surprisingly light and brittle.

The heron's other foot was also compromised by stress from the added weight and use, and a bacterial infection called bumblefoot.


This afternoon we received the sad news. The infection in the heron's foot was deep and into the bone. Its digits could not be saved. The great bird was euthanized.

The tragedy here, is that it took so long for this bird to be rescued. This is just another incident that highlights the need for a dedicated wildlife rescue team in the Los Angeles area.

Without a doubt, every day in L.A., numerous wild animals are found in trouble and in need of help, and sadly, many go unaided because there's no one to call.

WES will provide training and guidance, but we need volunteers - people willing and capable of being on-call for wildlife emergencies.

Ideally, the City would contract for a 24/7 dedicated service, devoted exclusively to emergencies involving wildlife.