With the sudden drop in temperatures this week, I decided to walk the beaches in search of sick birds. I thought, if any were in a weakened state, they could be suffering from hypothermia, too.

I started my "Friday rounds" with a search of the Moss Landing harbor area. I walked past 100 or so pelicans roosting on the jetty. I spied at them through my spotting scope, and they all appeared to be in great shape.

I spent some time picking up fishing line and trash, as I always do, then headed back to my car to check out the other side of the harbor.

From the parking lot I could see a few birds on the jetty, but nothing on the beach. I walked down the hill for a closer look. 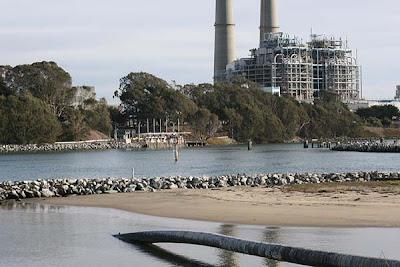 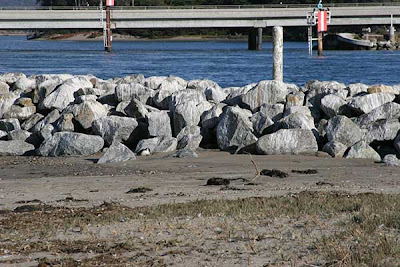 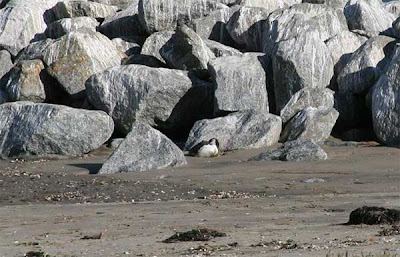 To my surprise, there was a common murre tucked in behind a rock, just a few feet away from where I stood. It had its head tucked into its feathers and its eyes closed.

I briefly considered picking it up with my bare hands, but knew better. Never to assume a rescue is going to be that easy!

I went to my vehicle for a net and a box and made my way back down to the little cove.

Net in hand, I positioned myself behind one of the large rocks, so the bird wouldn't be able to see me until I was right on top of it.

I walked quickly towards the murre's position, and in once sudden movement, swooped over and placed the net over the bird. It moved only slightly.

Performing a cursory assessment as I lifted the bird from my net, I could feel the coolness of its body and its feet were cold as ice.

Back at the vehicle, I activated a heating pad and placed it on the front passenger floorboard, covered it with a large sheet, placed the bird on top, then turned on my floor heater. 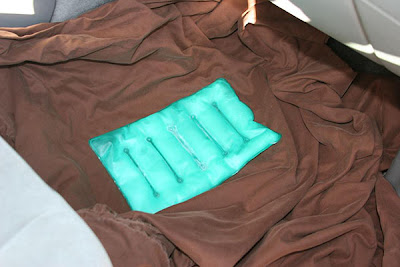 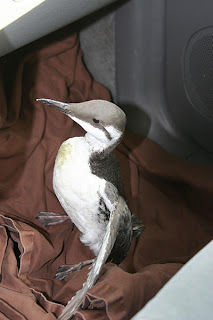 Within minutes, this bird that had appeared lifeless was standing up, facing the heater with wings open to the warm air.

I covered the floor space with a lightweight sheet, making a sort of tent-like enclosure for its transport to the wildlife hospital at the SPCA for Monterey County.

During the drive, I could hear the little murre become more and more alert. It even started to preen. A good sign.

Sadly, the murre was euthanized due to severe frostbite on the webbing of its feet.

How every thoughtful to brave our unusual cold and look for wildlife that might be suffering!
It is sad to learn that the cold was so severe even at the beach that it would kill the tissue on this lovely bird's feet.