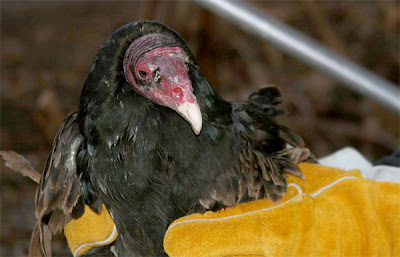 Late yesterday afternoon, I was forwarded an emergency call about a downed turkey vulture on a remote country road.

The bird had been lying in the center of the road when the RP (reporting party), Lisa, first discovered it, then it hopped off into the brush as she stepped from her car.

Knowing it would be nearly impossible to describe its exact location, and that the bird blended in with its surroundings, Lisa stayed with the bird until help arrived. 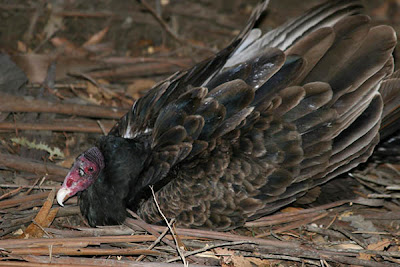 Light was fading fast as I made my way down the quiet country road lined by Eucalyptus trees. From a distance I could see a car with its emergency flashers blinking. I was so glad Lisa had stayed or I never would have found the bird.

Once on scene, I greeted Lisa, and she pointed to a dark object at the base of a eucalyptus tree.

The vulture was down, its head forward, resting on the ground. It appeared weak, obviously unable to fly, and in poor condition.

The wind was howling through the trees and I could feel the temperature dropping. I quickly grabbed some gloves and a long-handled net and began my approach from behind the bird, through the trees. As I neared, the vulture made a feeble attempt to hop away from me. I set the hoop net over the bird to halt its movement.

As soon as I knelt beside the bird to remove it from the net, it vomited - a typical response for a vulture. I have to say, I've never smelled anything quite so horrible.

I carefully picked up the bird, taking care to fold its wings, and placed it inside a dog crate lined with a towel. 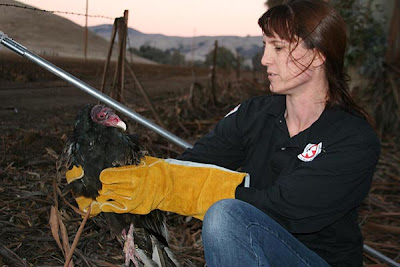 With all the nearby wildlife centers closed at this hour, I headed home where we have a room, isolated from the rest of the house, where we can safely overnight an animal in a warm, dark and quiet environment. It's called My Husband's Office.

Just in case there was more I should do for the bird, I called one of our, WES', consulting wildlife rehabilitators. She, too, agreed it would be in the bird’s best interest to house it overnight and deliver it to a wildlife hospital in the morning.

Once home, I placed a heating pad in the bottom of the carrier with warm sheets, fresh from my dryer.

The vulture survived the night and was transferred to the SPCA for Monterey Wildlife Center for rehabilitation.

Nothing says "This is a serious working space" like vulture puke.

A truly dedicated wildlife rescuer! Is there an update on the bird's progress?

Please give us an update, even if it's bad news.