The Fox and the Fence 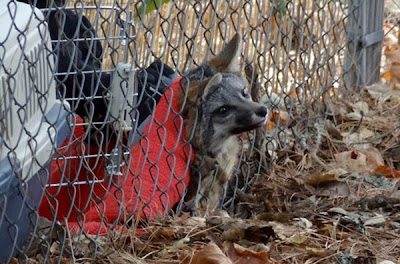 Yesterday, WES received an urgent call from a Los Gatos resident. A fox was caught by its head in a chain link fence. The reporting party (RP) had just spotted it in her backyard, but the animal could have been stuck for some time.

Gray foxes are excellent climbers - they can scale tall chain link fences with ease. For some reason, though, this gray fox tried to go through the wire mesh rather than up and over it.

One of our volunteer First Responders, Dana, responded. Here's her story:

When I arrived on scene, the RP showed led me to where the fox was trapped. Not surprisingly, the animal was extremely stressed, and it was important that we rescue him as quickly as possible.

The fox had, somehow, managed to wedge his head through one of the small diamond-shaped openings and could not pull himself free, though there was evidence that he had struggled for a long time. In his attempts to get free, he'd dug a deep hole in the dirt.

After getting a look at the situation firsthand, I created a plan of action that would allow me to remove the fox from the wire, but maintain control enough to then place him into a transport carrier. We did not want to just set the fox free. We did not know how long it had been stuck or if it was injured.

As I approached the fox, it struggled to get away, but then quieted as I got hold of him.

Its head was stuck so tight that I had to cut two wires, which then allowed it to wiggle out and wait guidance. 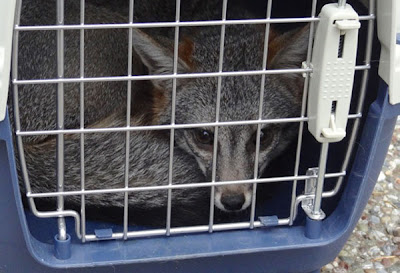 Once in the carrier, he quieted down quickly, which is not always a good sign. We delivered the fox to the Wildlife Center of Silicon Valley, where he would receive an examination and treatment for any injuries.

Today we received word that the fox is improving. He was admitted with a limp - perhaps that's why he tried to go through the fence to begin with, rather than climb over it. He was also treated for dehydration.

It looks like he'll be ready for release in a couple of days!

The fox was released this evening, just before dark. Dana transported the fox back to Los Gatos and released the fox in the wooded front yard next door to where it had been trapped. Check out the video:

A HUGE THANK YOU TO EVERYONE WHO
HELPED RESCUE THIS LOVELY CREATURE!

Is it just me or does any body else find it strange to bring an animal, that has just been rescued
from a cyclone fence entanglement, and release him right next to a cyclone fence ! Huh ?!

LOVE IT> Once again, good job to those who pay attention and those who do the saving and "repair".

Poor little thing.....so happy there are dedicated people out there like you that give of their time and energy to help them...always great to have a happy ending...love the videos....love you for doing this.......

Hey Ken - This was a very rare situation - the fox getting its head stuck by trying to go through rather than up and over the fence. We believe he had a sore leg which maybe accounted for him attempting to squeeze through one of the holes. The fox was returned Home. Home where there are dogs and people and cars and, yes, fences. Not only is it required (to return animals to where they came from), but it is only right to release back home.

Great work, Becky -- as usual. Everything done for this fox was for his good, including returning him to his home. He's one lucky fox to have been given such care and love.

I'm so glad to see another happy ending.
Ken, thanks for asking such a question. Many people don't know this and it's good to get these kinds of questions answered. :-)

Great job on the rescue, Dana! Good pix too!