In memoriam of a wild life lost 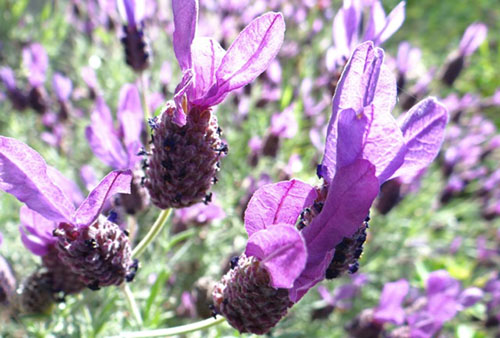 I am still not sure about what to say and how to say it, but a wild life was taken... in a grizzly manner... out of fear, out of ignorance, out of... I don't know what.

I am not sure what, really, if anything, can be done to prevent this type of thing from happening again... I just feel like this cat's story - the end of his life, must be told... at the very least.

On April 19th at about 10:30 AM, I received a voice message from a local wildlife rehabilitator who had gotten a call from a woman in Santa Cruz. The message indicated the woman had a bobcat trapped in a confined space - not a trap - and that she was intending to kill it if she couldn't get help.

I called both of the phone numbers I was given - numerous times, until finally someone answered.

By then, it was too late. The animal had been killed. Stabbed with a pitchfork, they said.

After taking the report of the incident and collecting the address so the body could be recovered, I asked the person to make sure the animal had expired.

Minutes later, I received a call back with word that the animal was still alive.

I was on scene quickly.

The landowners were very, very pleasant. The woman who had attempted to kill the animal was, surprisingly, remorseful - very upset by what had happened.

From the driveway, the couple escorted me down a few steps to a large fully-enclosed vegetable garden that overlooked a small orchard, paddock and vineyard. It was a lovely piece of property nestled in the wild hills above Soquel.

They pointed out the cat's body. Upside down, sandwiched tightly between two layers of fencing material. Two pitchforks protruding. It was obvious the cat was attacked from the outside of the enclosure while pinned. 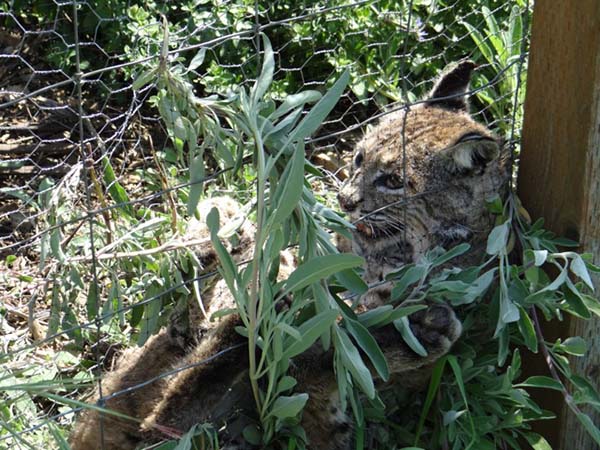 The adult male bobcat was able to move his front limbs, hiss, snarl... both nictitating membranes were exposed - perhaps from trauma to the head. There was not a lot of blood, but the cat was seriously injured.

WES does not yet have a field euthanasia kit, yet. Even if I had the means, I am not sure I would have put the animal out of its misery. The cat had life left, he had fight, and we owed it to him to try and mend his body. I felt it was worth a try even though he was in bad shape.

I grabbed my gloves, a net, towel and Fiskars. I pulled away the pitchforks - the tines were caught in the wire mesh.

The cat was panting. Cats overheat quickly. Hyperthermia is a life-threatening condition, and it can come on very quickly, so, while I wanted to get the animal out of the fence, I knew doing so would impose more stress on the animal and could raise its body temperature even higher. I needed to take the time to try and cool him.

I took one of the garden hoses and wet his underside - his groin, belly and paws. In wetting him down I could also assess his reflexes. He was able to swat with his front paws, but there was little movement in his rear legs.

After a minute or so with the water, I went to the outside of the enclosure and began cutting away at the wire. I used a towel to cover his head and distract him. As I laid open the fence, his back end was limp. I was able to grab hold of his rear legs and maneuver his body into a net and into a carrier.

There, in the plastic crate, the cat lay on its side... breathing but nearly unconscious. I took the hose and wet the bottom of the crate and his back paws. There was movement - he was able to move both rear legs!

WARNING: THIS VIDEO MAY BE DISTURBING TO SOME VIEWERS

The trip to the Wildlife Center of Silicon Valley was quick. There, technicians lightly anesthetized the bobcat to examine him. Unfortunately, the cat expired on the table.

A necropsy revealed severe bruising on the animal's head and punctures to the left side of the cat's neck and shoulder. The cat's stomach contained the remains of a domestic duck - the reason the animal was drawn to the garden and likely the rationale behind the brutal attack.

It is not fair to have loose ducks and chickens and then be angry that a predator kills and eats one. That's like scattering $20.00 bills around a city block and then getting mad that people are walking away with your cash.

I believe we must have clearer rules of engagement when it comes to people protecting their pets and livestock from wildlife. Keepers should be required to show use of suitable protective measures before they can lawfully kill an otherwise healthy wild animal.

This was probably the most gruesome rescue I've ever performed. Not because of the animal's suffering so much as the human condition that caused it.