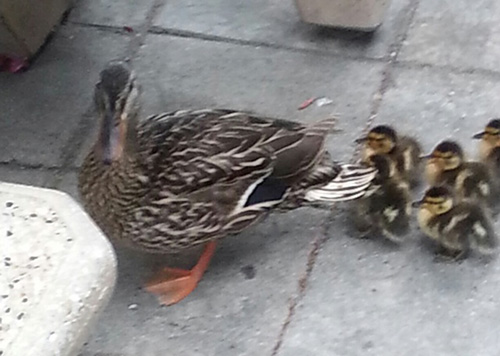 Early this morning, Robert Caposio, a security officer with First Alarm, had just started his shift in Santa Cruz when he was flagged down by a citizen. They informed him of a mother duck and ducklings in a busy intersection nearby.

Officer Caposio located the duck family and herded them out of the road, then contacted WES for help.

WES' volunteer Amy Harte, was on scene within 15 minutes.

The two of them worked together to gather the ducklings into a small pet carrier. The mother duck stood by, watching, nervously.

Once ducklings hatch the mallard hen will lead them to a body of water - one that she's familiar with from her flights.

The hen must have had her nest nearby - perhaps Laurel Park, and was probably leading her brood to the San Lorenzo River - just a couple of blocks away.

Amy was going to have to escort them there.

There are two ways to walk a duck and her brood to water - either by herding the ducklings, or collecting them and leading the mother.

It was a busy intersection so herding the ducklings was not an option.

With the ducklings safely contained, Amy Officer Caposio stopped traffic for Amy to lead the mother across Laurel and down a quieter side street.

They made their way down Spruce and over a berm to the river. When the hen saw the water she flew and landed in the middle of the river.

Amy found a flat spot nearby where the hen could see her babies as they were released from the carrier. She tipped the carrier, keeping the babies bunched together, then removed the carrier and backed away.

The mother joined up with her ducklings and led them into the river. 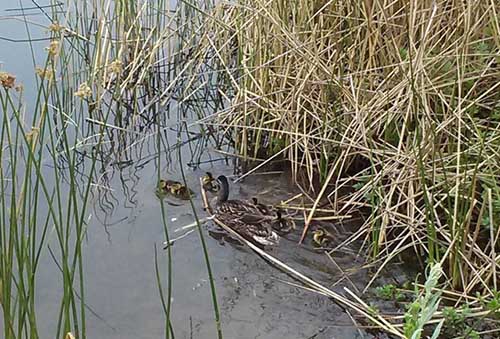