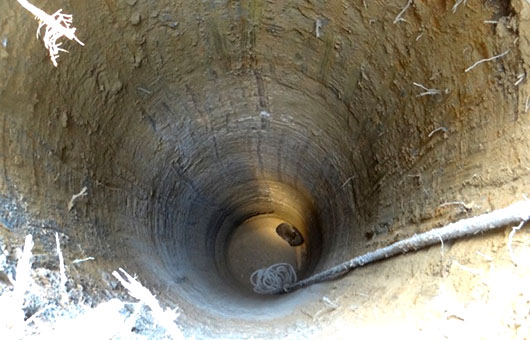 This afternoon we received a call from Joshua Francis, Construction Project Manager at the University of California Santa Cruz. He's overseeing a renovation project at Merrill College.

Earlier in the day, there had been some sort of commotion around one of the large drilled holes - holes that were to be filled with iron rods and cement. An adult raccoon kept venturing onto the site near one of the pits. Apparently, two juvenile raccoons had fallen in and were trapped.

At first the young raccoons were active and chattering, but as the day went on they huddled close and became silent. Joshua, an animal lover, threw a thick rope down into the deep hole, hoping the young raccoons would climb out. Then, he reached out for help and was referred to WES.

It was close to 6:00 PM when Duane and I arrived on scene. The construction crew had left for the day, so the site was quiet. 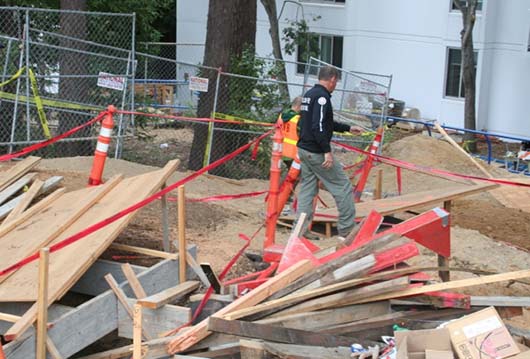 Joshua showed us the hole and how it had not been adequately covered or blocked off to prevent animals from falling in - something he's committed to improving on future construction projects.

The pit was about 35' deep and about 3' wide. To complicate matters, the floor of the pit was not flat - the drill left a bit of a depression on one side - a nice spot for the cubs to hide.

We didn't have exactly the piece of equipment ideal for this situation, but we had the makings for one. We decided to try a few other methods first... 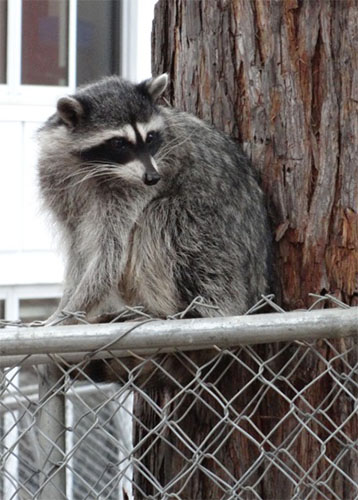 Duane rigged a collapsable-spring-loaded fabric bag that could be triggered to pop-up manually, entrapping the little ones inside... but we could not maneuver them into it. Next, we lowered a bal-chatri, hoping we might get lucky and snare a limb. Nope. Duane tried a noose, and got close a few times, but, no luck.

At one point, the mother showed up! She approached close, so we backed her away to a redwood tree where she watched and waited for some time. 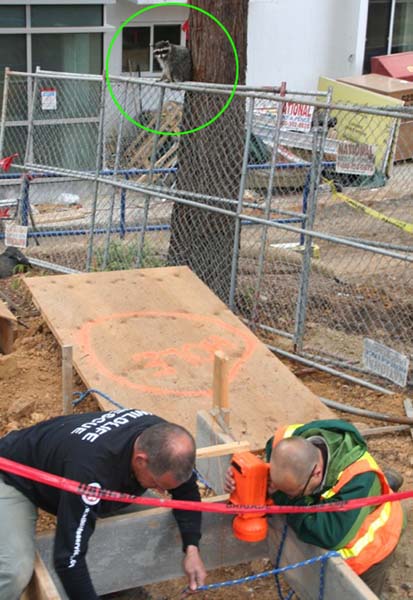 It was getting dark when we called the Santa Cruz Fire Department University Station to see if they might have some ideas or some sort of contraption, or maybe a way to get someone inside the hole.

Captain Graff, Joel Dimauro and Daniel Vaggioli were there within minutes. While they were very keen on helping us, there was little they could do. 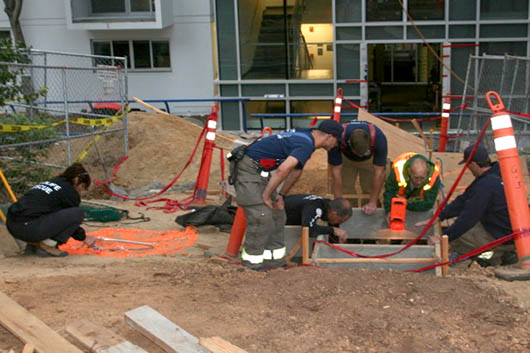 Because it was such a deep hole, it was considered a "confined space", which meant there were special requirements for anyone entering. Because it was an earthen hole that could collapse, it would have to be reenforced...

So, no one was going to be going into the hole.

We would have to make do with what we had to work with. 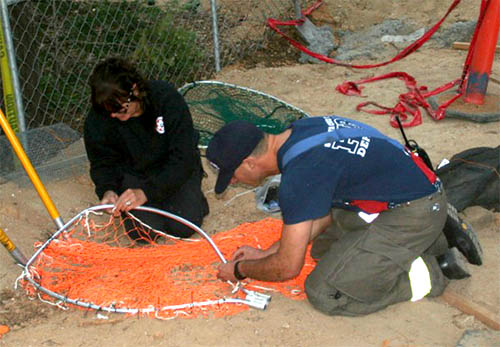 That said, one of the firemen helped us rig a specialized net. The aim was to replace the shallow sock with a deeper sock made (sadly) from one of our expensive panels of material meant for our Coda Net Launcher... the material was perfect for this application.

When capturing an animal with any type of netting, you want to consider its purpose. In most cases, like when netting a bird, you want to do the least amount of harm to its feathers, so you must select the smallest mesh where the bird will not become entangled. In other cases, like this one, we needed the mesh to be large enough where the animal's head and limbs would get caught and tangled.

After painstakingly cable-tying the netting to the hoop we lowered it into the pit. We controlled the metal hoop with one rope, and the mesh bag with string. It was like working a marionette... from 30' above!

I controlled the net's position at the base of the hole, while Duane encouraged the cubs to move out of their hiding spots and under the net using a metal rod on the end of a rope. Joshua continued to supply us with light from our 2-plus-pound flashlight that he'd been holding for at least 2 hours. 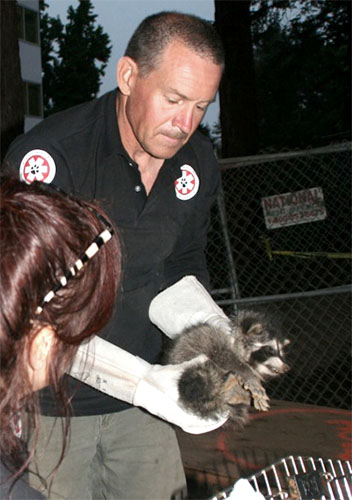 Within about 15 minutes, we had one of the cubs under the hoop. Loosening up on the string holding the netting material - letting it fall on top of the cub, and with a couple of pokes from Duane, the cub started to panic and get tangled in the fabric - just what we wanted. When we were confident the cub was securely inside the sock, we quickly pulled it up to the surface.

Once we started untangling the baby from the net, it started crying, which drew the mother.

Once out of the net, we placed the baby inside an animal carrier to assess its condition. Cold and a bit dehydrated, it was in good shape, especially considering the fall it had taken.

As we lowered the net to capture the sibling, the mother raccoon approached the carrier and the two chattered back and forth.

It wasn't long before we had the second cub. This time,  the cub walked on top of the net. We had to release all tension on the material and drive the cub into the sock. It worked!

Both cubs looked to be in good shape, so we decided to reunite them with their mom, right away. Duane opened the carrier door while I released the second cub. After a moment of chaos, the family was reunited and off on their way through campus. It was about 9:30 PM.


Snippets from the rescue:

A HUGE THANK YOU TO JOSHUA FRANCIS FOR GOING OVER AND
BEYOND THE CALL OF DUTY TO HELP THESE BEAUTIFUL CREATURES!!!

Thank you to Santa Cruz Fire Department for assisting with the rescue!!

Thank you to Roger "Pops" Titus for helping document the rescue!

WES is an all-volunteer-run organization supported solely by donations.

As a wildlife home care rehabber who specializes in raccoons, I cant applaud you guys enough!!!!! Thank you for going above and beyond!

Oh, the poor babies! So glad they were okay after such a long fall. So heartwarming to know there are people who go way out of their way to help little critters. Very nice job everyone!

That others outside WES were so keen on helping is very impressive. Kudos to all.

Wonderful work! I'm glad those cubs had you all to help.