One of our long-time volunteers and Lead Responder, Deanna Barth, is now heading up wildlife emergency response in her hometown of Hollister, California. Calls originate through WES' emergency number (831) 429-2323 or from an agency, and then forwarded to Deanna - at least that's how it's supposed to go...

Many in the town of Hollister are familiar with Deanna and her knowledge and skills with dogs and cats, and now wildlife. Often she'll be contacted for help by friends or neighbors.

Last night, a friend of mine called about a message she'd received from another neighbor. They'd found two mourning doves in the front yard of a newly sold home. I was asked to take a look. The doves had built a shallow nest on top of a column. Neighbors had tried to place the babies back in the nest but they kept leaping out. As expected - they were fledglings, not nestlings and were not about to stay put!


It was about 8:30 PM. There were no adult birds in sight, but plenty of cats!

Normally, we instruct people to leave fledglings on low branches or under a bush and not to separate them from their parents - even if there are cats in the area.

In this case, however, with at least two cats fixated on the young ones, I opted to take them in for the night.

I placed them inside a box with a Snap heat pack to one side and kept them in an isolated room - warm, dark, quiet.

Early the next morning, just after sunrise, I returned to the nest site and was happy to see several adult mourning doves in the vicinity - more importantly, no cats! 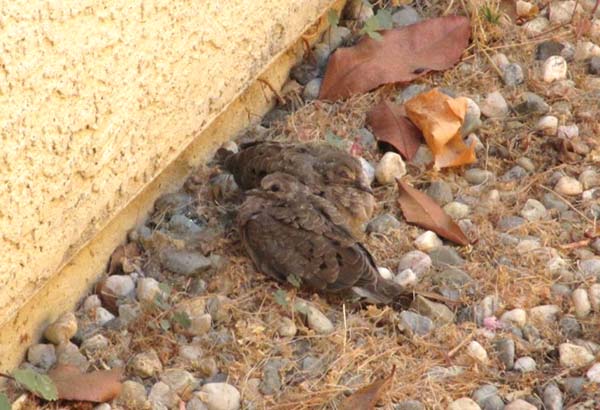 I placed the fledglings in a bush beneath the nest and they immediately fluttered up to the top of the fence. I watched from a distance for a few minutes. All was well.

A few hours later I checked the location again and was thrilled to see one adult dove on the rooftop and another on the fence directly above the side yard. When I peeked over the fence where I had last seen the fledglings, there they were, resting on the ground.

I left a note for the new homeowners, letting them know that the doves had been returned to their yard and to please leave them be. Their best chance of survival is to be raised by their wild parents.

That evening, I was alerted of a possibly injured egret in Hollister.

The homeowner had noticed the bird in her backyard around noon. When it was still there several hours later, she became concerned, but was unsure who to call. 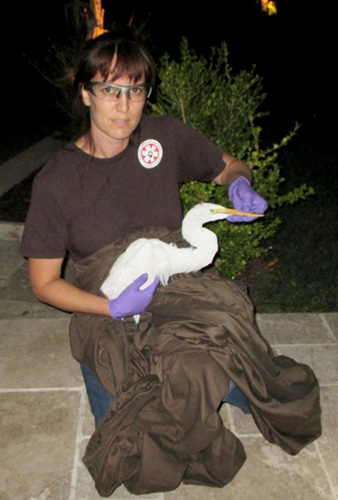 When I arrived on scene, the homeowner escorted me through the backyard. The bird was obviously ill; facing the corner and in a hunched position.

It didn’t look like the bird would put up much of a fight, but I’ve learned not to assume a rescue will be easy, so, I put on my safety glasses just in case.

I walked around the perimeter of the yard to determine what the bird’s exit points would be when I approached it. Luckily, it had chosen a perfect location for capture.

I took a large dark sheet and approached the bird slowly, from behind. It made a feeble attempt to move left and I scooped it up rather easily.

I felt, immediately, how thin and weak this bird was. I placed it in an animal crate with a heating pad so it could rest comfortably over night.

The next morning it was transferred to the SPCA for Monterey Wildlife Center.

Thank you to the homeowner, Kathleen Diekmann, for showing such care and concern for the egret!

SPCAMC Wildlife Center staff informed us that the  great egret was, indeed, emaciated. Other than some bruising on its back, it did not have any significant injuries. The bird was placed on a special diet and once strong enough, it will be transferred to International Bird Rescue for further care. If all goes well, it will be released!