Return of the Marmot 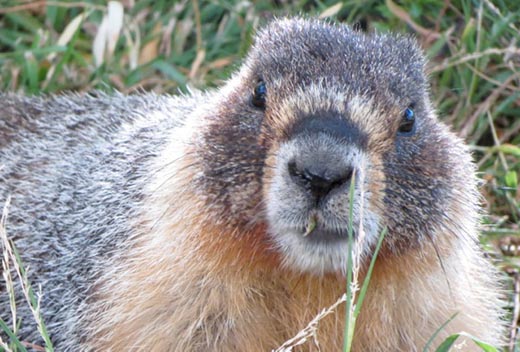 Re-naming my old Prius the Marmot Mobile, I picked up the adventurous San Francisco Yellow-Bellied Marmot from the Wildlife Center of Silicon Valley early this morning.

The animal was confined in a large animal crate with a yummy buffet of carrots, celery, peanuts and blueberries for his breakfast, while traveling back to his home in Yosemite.
I could hear Mister Marmot crunching away as we drove in silence (never use any radio when transporting an animal because it can stress them out).  I stopped along the way and peeked in the crate. He was burrowed under a bed of pillowcases, snoozing away.

Destination was May Lake, which is about 42 miles from the entry point of Yosemite Park, up Tioga Road, and then a few miles of dirt road that was heavily rutted with potholes almost as big as my car.

I parked at the trailhead to the May Lake High Sierra Camp where we believe the marmot originally hitched its ride to the Bay Area.

A very helpful family helped me carry the large crate up the trail. I chose the release spot off from the trail, near a huge bunch of boulders.

Facing the crate up the mountain, I opened the door. Nothing... We waited.  Nothing.  Waited. Nothing. The marmot was not coming out of the crate.


To give him a little encouragement, I removed the top half of the crate, then backed away.  Mister Marmot sat there, blinking in the sunlight.

With the mountain and grassy meadow welcoming him back to his home grounds, Mister Marmot, to my great astonishment and dismay, scampered back down the trail toward the parking lot. Dashing by hikers, he ran beside the bathrooms, beside the dumpsters. He ran diagonally across the parking lot and jumped up under a Toyota Prius. Right back where his adventure started three weeks ago. Unbelievable!!!

I walked back down to the parking lot to check it out. The Prius had a FasTrak device on the windshield, indicating it was from the Bay Area! Unbelievable...

Hoping the marmot had run under the car and out the other side, I accepted a hiker's offer to look up under the car with a flashlight.

Sure enough, there he was, hiding in the engine compartment.

OK. So now I go to Plan B. I placed a line of blueberries in front of car, heading into the meadow, hoping this would tempt the marmot out of hiding. I withdrew to a secluded spot across the parking lot to watch.

I never thought a remote location could be so busy. There was a continuous stream of cars and people coming and going from the tiny parking lot. So, every time the marmot ventured down onto the ground, either a group of noisy hikers or a loud car would frighten the animal back into hiding.

After about an hour, it quieted down, and Mister Marmot cautiously made his way from the Prius, over to a set of dumpsters. I sighed in relief. Finally.


Just then, from down the trail came an outfitter with four horses and riders leading four pack mules. One of the mules was burdened with a full-size mattress. Seriously?

Talk about noise! Like a shot, the marmot headed back to you-know-where.

Again, I waited and watched the whistle pig play hide and seek, then after about an hour of not seeing the marmot, I went over and looked under the Prius. A nice guy from Germany came over with a flashlight and crawled underneath, looking in every nook and cranny. The marmot was gone.


I left a note on the hood of the Prius, asking the owners to check under the hood before they leave. There really should be warning signs or some how warn visitors of the potential hitchhikers.

It was almost 6pm when I bid farewell to Mister Marmot, wherever he was hiding - Safe Travels.


A huge THANK YOU! to everyone who contributed gas money!!!

Wow - good for Samm. That's a long drive. It would be a good idea to contact the authorities at Yosemite by phone/e-mail - share the blog and explain this is becoming a common occurrence. They absolutely need to put signs in the parking lots (they have them about the bears taking food from cars). In fact they have signs in the lobby too. If costs prohibit that, then park rangers need to verbally tell people. I think if the rangers were notified of the issue they would be more than willing to educate the public. Everyone needs to do a "mandatory marmot check" (hahaha) before they exit the park!

Ha, ha, ha! Really enjoyed Samm's adventure to return Mister Marmot. Admire your patience and kindness in traveling so far to return a single creature to its natural habitat. Sure hope he stays put and doesn't go traveling again. Yes, everyone visiting Yosemite should be made aware of cute marmots who like to hitch rides out of the park. Great work, Samm!

Sammarye -- thank you for your awesome dedication and skill, and your delightful wordsmithing!

I love this article so much I have read it several times. It is a wonderful story. Thank you Samm.

I hope Mr. Marmot has re-settled into his natural habitat.