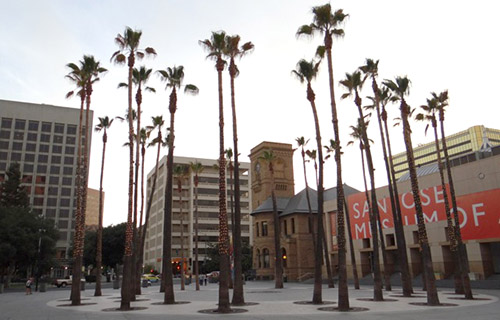 It was late in the afternoon when we got a call about an acorn woodpecker entrapped in the underground parking structure of 50 West San Fernando, in downtown San Jose. The address was familiar - we'd been there before for an entrapped bird...

Duane and I just happened to be in the area, so we responded.

According to Mike, the security guard who reported the bird in trouble, the bird was first spotted yesterday.

When Duane and I arrived, the bird was perched on a pipe up against a wall. 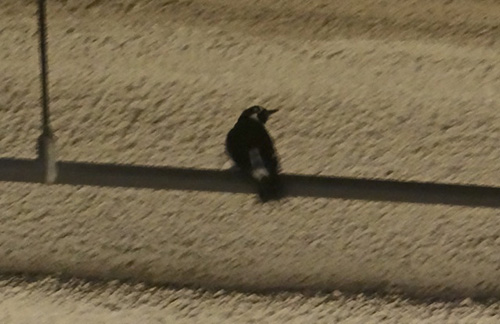 Instead of grabbing a net and chasing after it, we needed to test its behavior to see how it would react to approach.

It may seem counter productive to "push" a bird from it's resting spot, but in situations like this - where you have a flighted bird in an enclosed space, this information is critical to a successful capture strategy.

Mike said the bird seemed to gravitate to this one particular area - where it was perched. By walking close to the bird, we gently pressured it to move off. Indeed, it quickly returned to that same area.

A few minutes later, it flew to the ground and began picking at crumbs. It was hungry. Good.

Believing the bird would land in that general area again, and seeing that it was hungry and comfortable landing on the ground for food, Duane and I set up a drop trap.

With the trap set, I would try to encourage the bird back to that area, hoping it would be attracted to the seeds and grain and apple bits underneath.

I walked the parking garage, applying pressure for the bird to move on. Surprisingly, the bird allowed me fairly close before it would fly... but not close enough to get it with a net... too many obstacles.

After about 5 minutes of gently "pushing" the bird from various pipes and landings, the woodpecker settled on the ground, in a corner (Yes!) and was intent on pecking at something it took for food.

Just in case it allowed me close enough, I grabbed a long-handled hoop net.

These birds are very sensitive to movement - I needed to be sure the bag, or sock, of my net was not hanging down  - it needed to be taught.

I began my stealthy approach toward the bird. Left fingertips pulling the bag tight over the net's handle. Right hand gripping as far back on the pole as possible for the greatest reach.

Cat-like, moving ever so slowly - freezing whenever the bird's eyes were on me, inching closer when it looked away.

I knew my moment would be when the bird's head is turned and it's focused on that bit on the ground... wait.

Finally, it turned and started raking its bill on the ground. That was it.

I lunged. The bird popped up and over the hoop, I repositioned the hoop in front of it - in the direction I knew it would travel  - and bagged the bird! Yes!

As I processed the now-screaming woodpecker from the netting, Mike brought over the carrier so we could safely shuttle it up the stairs to freedom.

Check out the video of its release:

THANK YOU MIKE BETHEL FOR HELPING SAVE THIS BIRD'S LIFE!!!!