Andrew Bear is one of WES' newer First Responders. He joined WES earlier this year after completing our Wildlife Search and Rescue training. Andrew's pretty much up for anything - he's helped in a Western screech owl reunion, and he's become quite the goose wrangler.

Here is his story of two recent goose rescues. 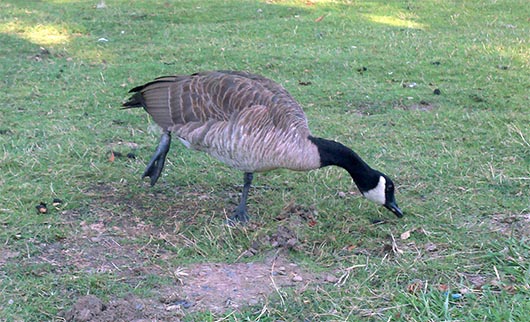 On July 26th, late in the afternoon, I received an email from a Vasona Park ranger that there was a Canada goose with fishing line wrapped around its leg. It was reportedly near the boat rental dock.

I had met this ranger, and several others, earlier in the year when I'd spotted another Canada with an infected and swollen foot. I and was able to capture it quickly while the ranger observed. I gave this ranger several business cards from Emergency Wildlife Services and encouraged him to report injured wildlife to WES.

I arrived at the dock later in the evening, and there were no Canada geese nearby. I decided to go a little further along the bank of the reservoir, where I have seen them gather before.

As I stood there looking at the flock with my binoculars, two geese came ashore from the water directly in front of me: one limping with fishing net embedded in its leg!

The Canada goose allowed me to get fairly close…within about six feet, but not closer. I didn’t want the goose to fly away, so when the goose looked about to fly off, I backed off.

I took out some bird seed mix I had in a baggy in my pocket and scattered some near my feet. As some of the birds became interested in my offerings, I ever so slowly unfolded a bed sheet and held it around my waist like a skirt.

The injured goose pecked at the bird seed, but stayed about six feet away, no closer. 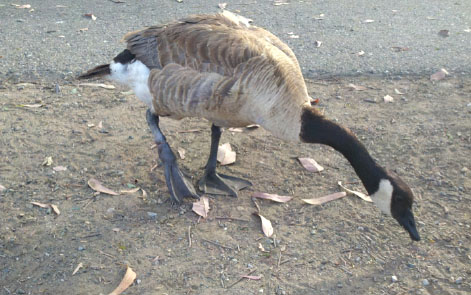 I decided to be patient, and so we did this dance: me scattering bird seed to attract the goose, the goose watching me warily until I was a comfortable distance away, then eating the seed.

We did this dance for nearly 40 minutes.

Then, at one point, the injured goose was positioned between me and some bushes that would not allow the goose much take off room.

I waited for that moment - for the bird to put its head down.

The goose looked down and began eating the seed - I threw the sheet over him/her, then grabbed the sheet-wrapped goose in a way that stabilized its wings against my body.

I transported the goose the Wildlife Center of Silicon Valley (a few minutes before closing time—thank you staff!), where they were able to cut the line off the goose’s leg and treat its wound. It would remain at the wildlife hospital until its leg was completely healed. 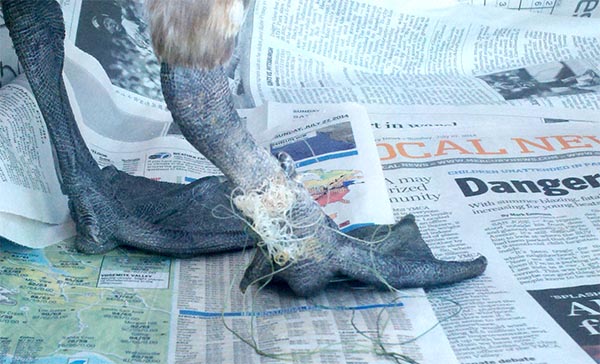 I returned to Vasona Park, went to the flock just past the boat rental dock again, and immediately saw a goose limping. As I got closer, I saw a much larger amount of fishing line around its leg.

This goose was not putting any weight on its left leg.

I had my bag of seed and sheet with me, as usual. As I took out the seed, geese raced from all over, honking with wings spread out, with much excitement.

As the flock was in the throes of excitement, I was able to maneuver into positions was close to the injured goose, and captured him/her quickly.

Back to the wildlife center!

Both geese rescued by Andrew made full recoveries and were released today, back where they were captured. Check out the great video below. 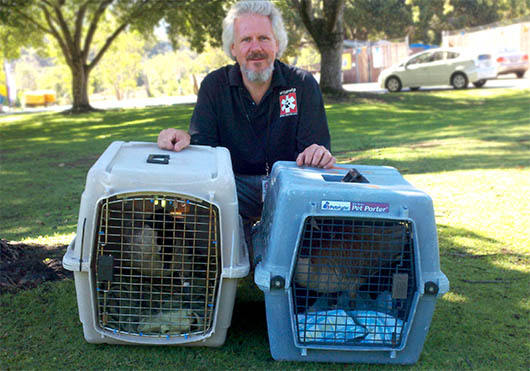 THANK YOU FOR YOUR AWESOME WORK!

A HUGE THANK YOU TO THE WILDLIFE CENTER OF SILICON VALLEY WHERE
THESE BIRDS RECEIVED THE MEDICAL CARE NEEDED FOR THEM TO SURVIVE!

If you want to help cover the cost of gas or supplies or support our
field response capabilities, consider making a donation of any size.

Nice work Andrew! Kudos to you and 40 minutes of patience to capture and treat that first goose. -- Patrick in Seattle