Yesterday, we received a call about an ailing bobcat with a cub beside it. She was found near the UC Santa Cruz campus.

WES's wildlife capture expert Duane Titus responded immediately. Upon arrival, he found the adult bobcat lying under a bush, but her cub had wandered off.

Using a catch pole, Duane pulled the nearly lifeless cat from the shrubbery and into a carrier. She barely struggled.


Because there are no veterinarians or wildlife hospitals in Santa Cruz County willing to treat injured or ill adult predator species, the cat was rushed to the Wildlife Center of Silicon Valley, in San Jose - about an hour's drive.

Exhibiting classic signs of rodenticide poisoning, the cat was immediately treated for dehydration and exposure to an anticoagulant agent.

Unfortunately, despite the heroic efforts of medical staff, the mother cat did not survive the night. Her body will be sent to the California Department of Fish and Wildlife Investigations Lab to determine the exact cause of her death.

As for her cub, WES capture team returned to the area today to look for the kitten. While it was reportedly observed by pedestrians, the capture team failed to locate the kitten. Search efforts will continue.

Duane and Rebecca spent the good part of Tuesday (the couple's anniversary) looking for the kitten at the UCSC Arboretum, near where it was seen last. After a couple of hours walking the premises, they located the baby bobcat close to the park entrance. 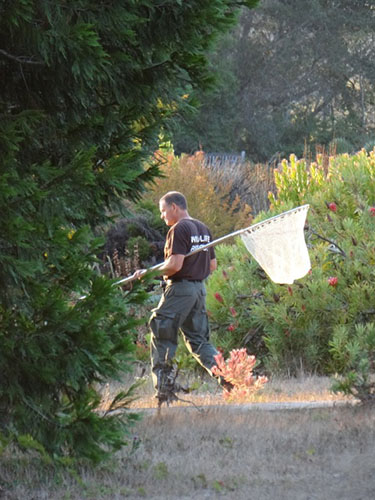 Students and staff assisted in the capture - the cat was netted, momentarily, but escaped and ran into the brush.

The kitten appeared younger than first estimated - closer to 5 months old. Bobcat kittens stay with their mother for about one year.

We believe this juvenile bobcat's chance for survival would be better if it were captured and raised in a controlled environment until it's old enough to be on its own. It would then be returned to the area.

While the arboretum offers a safe environment with plentiful prey, the kitten has been seen close to a heavily traveled road.

If this bobcat is the same one captured on trail cameras, it may have had a sibling, which was killed by a car on August 28th.

After their failed attempt, the team returned again on Wednesday. They set 3 humane traps and spent 8 hours searching the grounds. The cat was sighted by visitors, but word never reached the team.

Later that afternoon, the kitten was located - again, near the entrance. It was quick to run for cover and was lost.