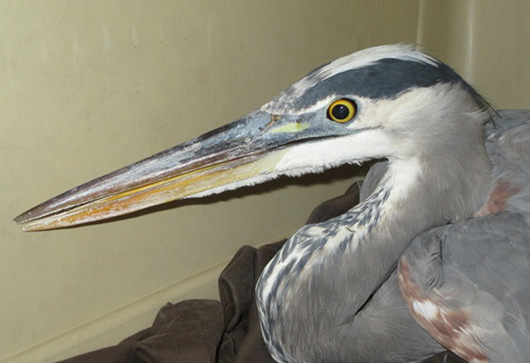 When I was forwarded a call about a possibly injured great blue heron just a block away from my house, I was ecstatic!

Let me clarify... I wasn’t happy it was injured or sick, but this would be my chance to finally see one of these magnificent birds up close.

The great blue heron is “my” bird - my home is filled with photos, paintings and statues of these beautiful creatures. I've just always been intrigued by them. While I've rescued numerous types of birds, I've yet to hold a Great Blue in my hands.

Like a child going to Disneyland for the first time, I drove to the location with a smile from ear to ear.

I arrived at the address and was met by a gentleman who anxiously showed me onto his property. It was obvious that he was very worried. 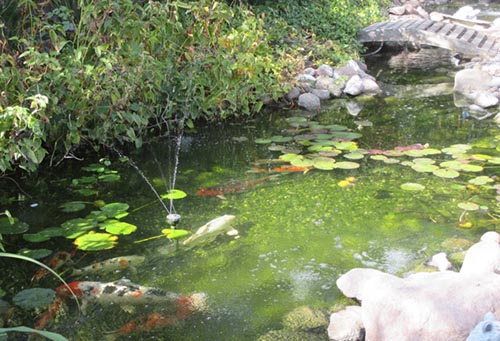 As I followed Curt, I paused to enjoy the beauty and soothing sound of trickling water. The yard was lush with greenery draping over various rocks and bridges, and there was a pond filled with koi. Surrounding it were statues of great blue herons meant to ward off the real thing (but it doesn't work very well).

I complimented Curt's work and he proudly explained that his backyard had been certified by the National Wildlife Federation.

We continued around the back of his house to the side yard where the trash cans were kept. There it was - I could see the heron huddled in a corner. 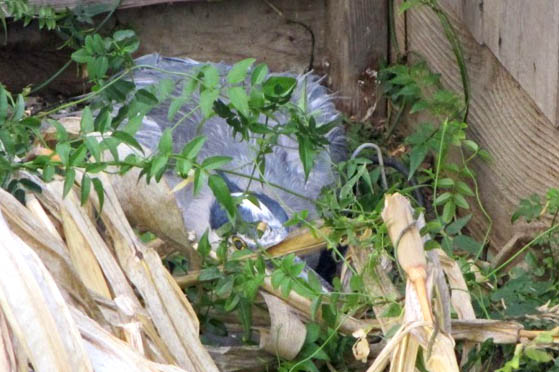 Without a thorough exam, it would be hard to say what was ailing this poor bird, but this was certainly not normal behavior.

While it's not unusual to see a heron or egret in one's backyard - especially one that is so lush and with offerings of a fish pond, the bird's behavior is what clued us in to this being an ill or injured animal.

When the call was transferred from the Hollister Police Department to WES, Curt was asked to describe the bird's reaction to approach. When he said it ran away from him rather than fly, we knew something was wrong. 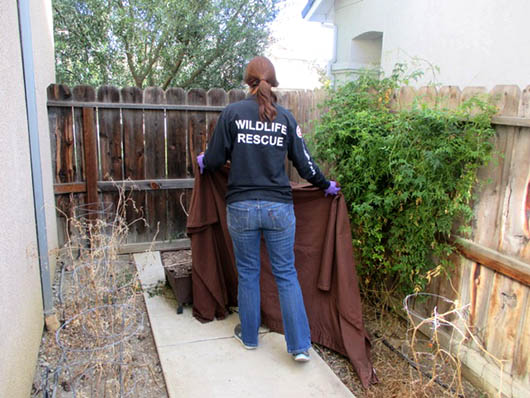 I approached the bird slowly with a large sheet in front of me, and I was able to stand within inches of the bird without it moving.

Finally it made a feeble attempt to stand and flee but was too weak. It turned to face the corner and that's when I draped the sheet over its body to contain its wings. 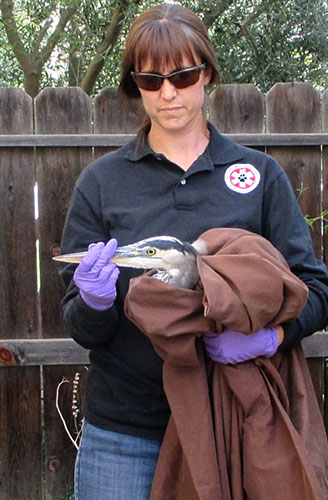 Maintaining control of its head, I walked to my vehicle and loaded the heron into a large animal crate.

I contacted the SPCA for Monterey County Wildlife Center, and Staff was kind enough to meet me half way.

My fingers are crossed for a good prognosis for my favorite bird.


Thank you to Curt for his deep concern for the heron’s well-being, and to the Hollister Police Department for referring the emergency call to us.

Radiographs revealed the heron was shot!

We have alerted authorities and are posting flyers in the vicinity for any information on who may have committed this crime. Thanks to supporters, we are able to offer a $5,050.00 reward. See our post, HERE.

If you'd like to add to the reward being offered, pledge by emailing us, HERE. 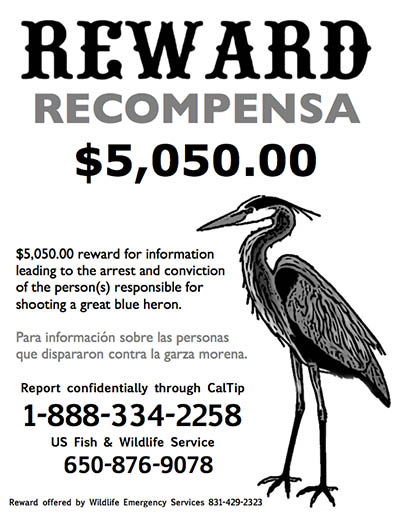 Hope and pray that the heron can be saved.

Thank you for giving that beautiful bird a chance at life.

Great work! Sad and disgusting that anyone would shoot this magnificent creature.

I've left a message for the Fish & Wildlife Service. I sincerely hope they are able to catch whomever brought harm to this beautiful bird.

Thank you for being there to help this incredibly stunning creature. Horrible to imagine some walking brain donor would harm it. I truly hope someone knows who is to blame and has the courage to bring him to justice.