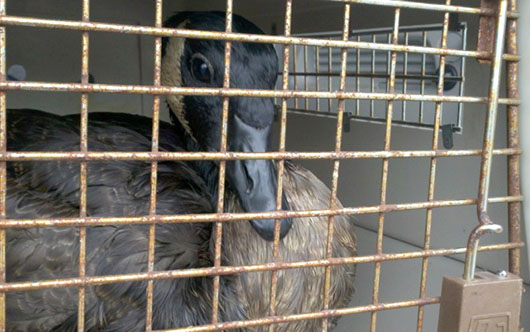 Yesterday afternoon, WES received an urgent email asking if we could assist with the rescue of a Canada goose that appeared to be covered in oil in Richmond, CA. It was seen traveling with other Canada geese near the harbor.

The goose was first observed on the 12th by a Marina Bay resident, Lisa, who watched over the goose as she reached out for help. Finally, after numerous calls and emails, WES was notified and took the lead in responding.

Geese can be very tricky to capture, especially if they are flighted, like this one. They tend to be skittish of nets. Instead, we use snares or simple lure them close enough to grab by hand. We asked Lisa to see how the goose reacted to a handful of grain and bread crumbles.

Lisa was quick to return video of the goose responding positively to food offerings. 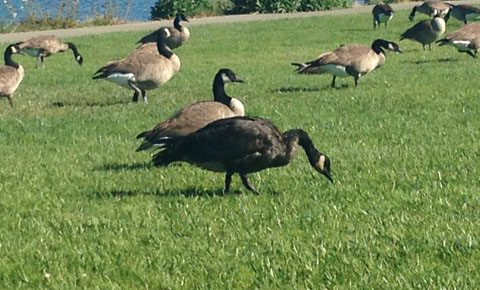 This helped us decide what method of capture we would try first, and which of our trained responders to send.

WES has not one, but two expert goose capturers - Deanna, who lives in Hollister, and Andrew, in Los Gatos. However, neither was available at the time.

We reached out to our few San Francisco-based volunteers, but it was getting late in the day - too late to capture and then transport the bird to International Bird Rescue in Cordelia. The rescue was postponed for the night.

By morning, Andrew Bear notified us - he was able to take the afternoon off from work! Ken Weidner, one of our San Francisco responders was also available.

After being briefed on appropriate personal protective equipment (PPE) to stay safe while handling the animal, Andrew and Ken teamed up to capture the goose. Here is Andrew's account:

When we arrived, the goose appeared very alert. I began by walking among the geese, observing their behavior. I wanted to see how close I could get to the oiled one.

It did not allow me closer than about eight feet.

Ken and I donned our protective equipment and goose wrangling gear. We both had a bag of seed and bread crumbles and we each had a bed sheet around our waists to use when grabbing the goose.

The plan was for me to bait the goose close enough for capture, while Ken applied gentle pressure to keep it from moving off. He would also distract the older, more aggressive geese.

As we began tossing crumbles and seed, the geese began gathering close. One walked right up to me and would have eaten out of my hand!

The oiled goose, however, kept a safe distance from me - about 8 feet away.
I noticed that it would come closer for the small pieces of bread, so I worked the bread for a while longer.

Finally, after about 45 minutes, the goose got within about 2 feet and I was able to capture it with the bed sheet!

We placed the bird in a plastic animal carrier and Ken transported it to oiled wildlife experts, International Bird Rescue.

Stay tuned for updates on this bird's recovery.