Yesterday, Friday, we were transferred a call from San Jose Animal Care and Services - they needed help in rescuing a hawk trapped inside the gymnasium at Gunderson High School.

Accipiters are slender-bodied, broad-winged hawks with long tails. They are agile flyers, able to maneuver through a dense forest with ease. Accipiters prey on small mammals and birds and are often referred to, in general, as sparrowhawks.

The hawk was first noticed on Wednesday afternoon. It had evidently swooped down for prey and overshot its dive, ending up inside the gym. Instinctively it headed for the rafters for safety.

Because the gymnasium was in use when we received the call, and a game was scheduled for the evening, we postponed the rescue for a quieter time when we'd have the greatest chance of capturing the bird.

Today, Duane and Rebecca met a security guard at the school so they could have access to the locked building.

Inside, the juvenile Cooper's was circling the gymnasium, lighting on beams and wires for a few moments before taking flight again. The team placed a bal-chatri in the center of the gymnasium.

A bal-chatri is a type of trap used to capture hawks and other types of predatory birds. It's basically a small wire cage, covered with snares. A live animal placed inside the cage is what lures a bird to the trap. The wire mesh must be small to prevent injury to the animals inside.


A society finch was placed inside the holding area... Frightened by the new surroundings it did not move. It stood, motionless. 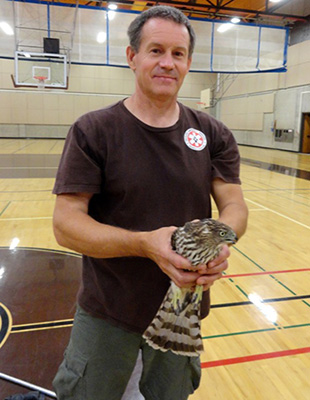 A domestic mouse was added to the cage, and immediately the movement caught the bird's attention.

It did not take long for the hawk to land on the trap.

It did the typically "dancing" on the cage, even grabbing and lifting it. Unsure if it was snared, the team approached slowly... As they closed in, it flew a few yards away.

They backed off, and within a few minutes the hawk landed on the trap again. This time it was snared.


Check out the video.

Once they were sure it was caught, the team ran in to remove it from the snares. It was immediately released outside.

The mouse and the finch were a bit shaken but not injured. They were both re-homed.

We want to thank Gunderson High for being so accommodating in letting us have access to the gymnasium. We also want to thank Mary Kenney for the donated bal-chatri, and to the Erwin family for sponsoring this rescue.

Keep WES running! Help ensure our ability to continue providing our valuable services by making a contribution. Thank you so much!

BRAVO! Wonderful rescue. Wildlife is so lucky to have WES in existence.

Great job again guys and I learned something new =)