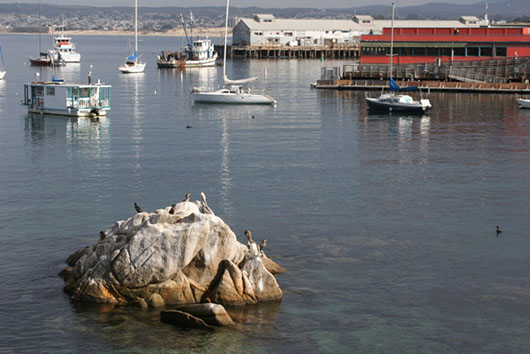 Today, I decided to start my rounds at the Monterey Wharf, because it had been a while since I'd been there.

When I arrived, for some reason, I decided to walk along the bike and pedestrian path that hugged the shoreline, instead of searching the pier.

As I walked, I kept my focus on the water's edge, checking for any sick or injured birds. When I came to what I like to call pelican rock - a rock that sits out in the shallow. A favorite loafing spot for pelicans and cormorants. I sat down and used my binoculars to scan each bird.

One of the cormorants had its head tucked into its feather, asleep. I thought I caught the glimmer of fishing line but couldn't be sure.

I watched for about 20 minutes until the bird finally unfolded itself and began to preen. That's when I could clearly see the line, at least a foot of it, trailing from the hook lodged in it's bill.

I immediately started thinking of all the different rescue strategies - how could I safely reach and rescue this bird.

Cormorants are not easy to capture, even when they cannot fly, and it was obvious that this bird was still flighted. So, as soon as anyone got near, it would most certainly take off.

We would have to determine where and when it hangs out - determine its behavior pattern, and possibly come up with a plan for a night rescue to better our chances (some birds are easier to capture in the dark). Otherwise, the only way I was going to capture this bird was if the line were to get snagged on a branch or other structure.

I watched in frustration as the bird began to hop around the rock, constantly rubbing its head in an attempt to remove the line.

Suddenly the bird stopped, forcefully threw its head back and began to flap its wings - the line was stuck on the rock!

I watched helplessly as this bird struggled to free itself. I needed to leave to get help.

I packed up my gear and walked over to the Coast Guard jetty where I approached several crew members that were working nearby. I explained the dilemma and although they would have been happy to assist, regulations would not allow for their boat to enter such shallow water.

Next, I drove to the Harbor Master's Office and asked for their help.

I was thrilled when they said yes!!!  Fifteen minutes later I was on a boat.

The tide was low, and with only 3' of water between the bottom of the boat and the sharp rocks, the skipper was concerned. He cautiously maneuvered the boat up to the large rock, stopping about a foot short.

During our approach, all the birds took to the sky except for the tethered cormorant, which was now violently thrashing back and forth to get away from me - the big predator.

To reach the bird, I needed to scramble up the rock, but the boat was rocking, the surface of the rocks was jagged and slippery and my first priority must be my own safety. As frustrating as this can be, I knew there was a limit to what I could do.

With net in hand, I took some time to gain my balance before stepping off the boat. Again, I took time to carefully scale the rock. Finally, when I'd made it to the top where I could reach the cormorant with my net - it took off!

My biggest fear was that the line would snap and it would fly away with the debris, but, to my surprise, the hook had come dislodged from its bill!

I picked up the line with hook and weight still attached and made my way back to the boat and back to shore where I thanked the Harbor Master for assisting me in this rescue. It wasn't the rescue I had hoped for, but it certainly ended up being a positive outcome for the bird. 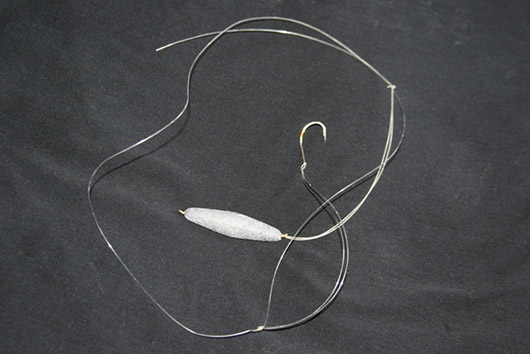 Hopefully the bird's bill wasn't injured when the hook came off! As always, your rescue is appreciated :)