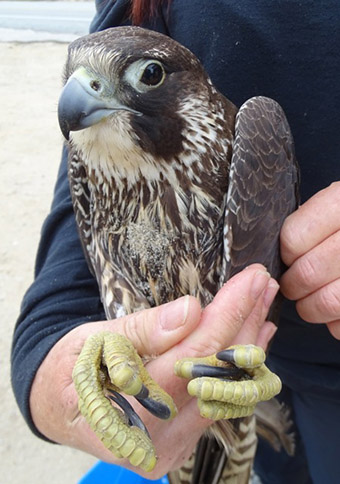 Yesterday afternoon, WES received word of a grounded raptor at Scott Creek. It was described as being black and white with blueish eyes and a hooked bill. The reporting party noticed it on the dunes near the protected plover habitat at Scott Creek.

Responders found the young peregrine falcon. It's eyes were closed, which accounted for the description of it having blue eyes.

The bird was cold and weak and easily captured.

Since December, there have been several confirmed cases of the highly pathogenic strain of avian influenza HPAI H5 in the Pacific Flyway. Click HERE for details.

Avian influenza is lethal for falcons within 48 hours of ingestion of an infected bird.

The peregrine falcon was placed on heat and transported to Native Animal Rescue where it died shortly thereafter. Its carcass will be shipped to the state Wildlife Investigations Lab for testing.

The Wildlife Investigations Lab concluded the peregrine died from a serious systemic bacterial infection. There was also a trace of brodifacoum in the liver.