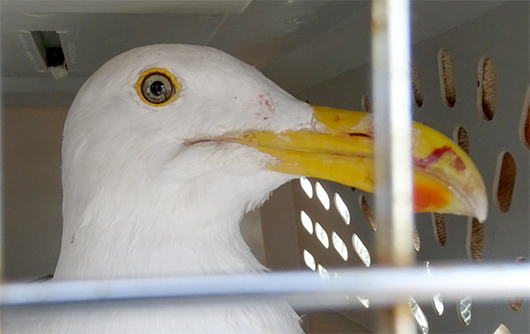 Yesterday, WES was alerted of a gull at the Santa Cruz municipal wharf with a treble hook and lure caught on its right naris, or nostril. Apparently, the gull had been in this condition for about a week, with attempts to capture it, unsuccessful.

Duane and Rebecca responded and were able to locate the gull but before they could try baiting it in, the bird flew off and couldn't be located again.


The duo returned the next day and found the gull where it had been reportedly hanging out, along the thin walkway behind Riva's Fish House. The gull had blood stains on its wings - its wrists, where it had obvious caught itself with the treble while grooming.

Before deciding on a method of capture, one must get to know the animal's behavior a little better - how it responds to human presence, if it is interested in food, its rank among conspecifics, that sort of thing.

Fritto crumbles and pieces of baitfish were used to draw the gulls attention - and it worked! The bird readily approached within a couple of feet of the rescuer, with very little care. That meant it could be lured toward a hoop net. It was also a top-ranking Western gull. Even injured as it was, it was well respected among others of its kind. This would make baiting it in even easier.

The team brought in a long handled hoop net, with the hoop and netting carried close at the hip to conceal it and not frighten the gulls. The hoop was set vertically, leaning up against the exterior of the restaurant near where the bird had baited.

Guests of the restaurant watched curiously, peering through tinted glass as these rescuers lured the gull close. It wasn't 5 seconds after the bait was placed that Duane had it netted. 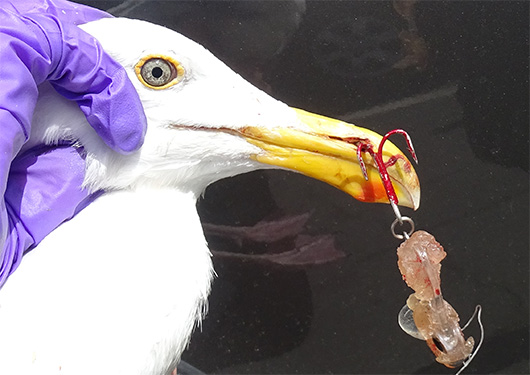 Back at the rescue vehicle the treble was removed from the bird's bill before being transported to Native Animal Rescue for evaluation and care.


A huge thank you to Melissa for reporting this bird to WES!!!