Returning 6 baby owls back to the wild: priceless


It was Sunday morning around 9:00 AM. Duane and I had just arrived at our Sunday morning breakfast spot when we received a call from WildCare about a fallen owlet. It had been found at the base of a eucalyptus tree at the Chuck Corica Golf Complex in Alameda.

I asked for the reporting party's number so I could get the details, firsthand - more about the baby, how big, its exact location, when it was first found, and maybe get a picture of it texted to my iPhone. All really important information to collect from the finder before it's too late - before the animal is dropped off somewhere and no one knows where it came from. 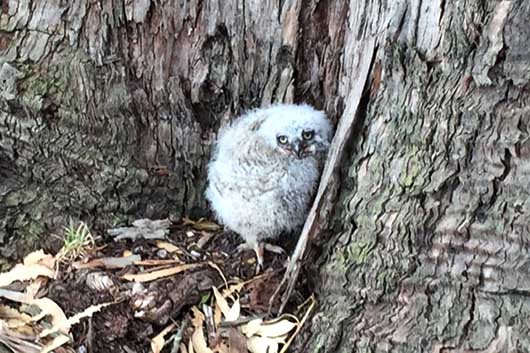 The finder, Jake, was very willing to help. He texted a picture of the owlet which confirmed it was a great horned owl nestling. We had him look around for other owlets, in case more had toppled.

In the meantime, I contacted the golf course to discuss renesting. It was during one of these conversations they mentioned that another baby owl had been found last week and was taken "somewhere".

I contacted the nearest wildlife hospital, Sulphur Creek Nature Center, and sure enough, they had admitted an owlet from Alameda but had no information on where it had been found. Little orphan owlet, no more!

The day was getting on - it was maybe 11:00. It would take time to organize a renesting, so we asked Jake to give the owlet a ride to Sulphur Creek. There, it could get a proper evaluation by medical staff and be reunited with its sibling.

In the meantime, we received a call from the Elkhorn Slough Reserve that a baby great horned owl had fallen from one of the barn owl nest boxes (Yes, right.) They said it looked good except for a little bruising on one wing.

As wildlife paramedics we provide first aid, but, if there's any question as to an animal's condition - if it looks sick or injured, it must be seen by a licensed wildlife rehabilitator.

The SPCA for Monterey County was called to pick up the baby.

Meanwhile, WES received another call about fallen owlets. This call was patched through to us from 911. The RP was reporting 4 baby owls had fallen from a palm tree. 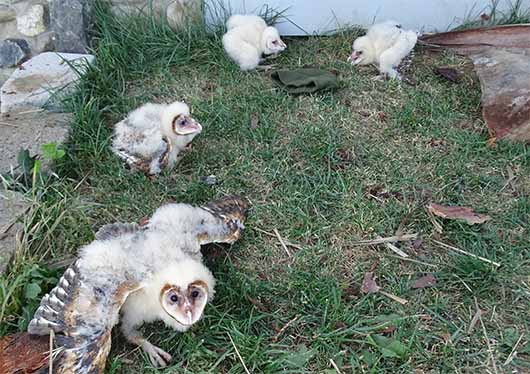 Duane and I rushed to the location to find four very upset barn owl chicks on the ground next to debris that had once been their home. The homeowner had been cutting at the dead fronds of the large palm when a big chunk of rotted wood fell from the trunk - inside were the babies!

We began collecting them.

You have to take great care when handling barn owls of any age. When frightened they'll use their talons to strike at and grab hold of anything in reach - a gloved hand, a towel, a sibling, even a part of their own body. So, their talons must be controlled at all times.

We collected the feistiest chick first, placing it into a box by itself so it would not hurt one of its siblings. The second oldest was also confined separately, and the two smallest were placed together.

They all needed to be examined by a licensed rehabilitator.

Timing could not have been better!

Jessica Shipman, manager of the wildlife rehabilitation program at the SPCA for Monterey County was nearby, picking up the Elkhorn owlet. We met up with her so she could have a look and a feel.

Sadly, two of the barn owl chicks were badly injured and could not be returned to their nest, but the oldest and the youngest appeared to be in good health.

The great horned owl from the reserve was also in good shape and could be returned to its nest, but we'd need approval from the Reserve's manager to work on site. Since this could take a day or so, and with other owlets to renest, the little great horned went with Jessica for the time being.

It was now about 2:00. Duane spent the rest of the afternoon building a barn owl box for the Freedom owlets. 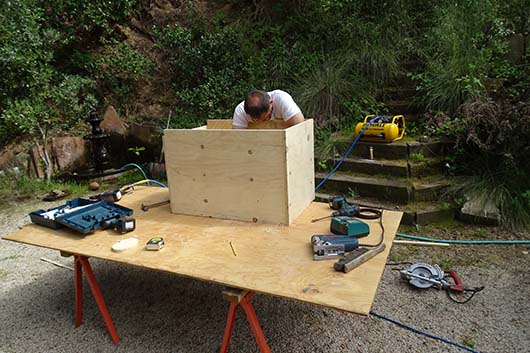 At about 7:00 PM, we headed over to the home in Freedom to install the owl box and renest the barn owl chicks. Two WES responders, Mary and Maureen met us there to help. 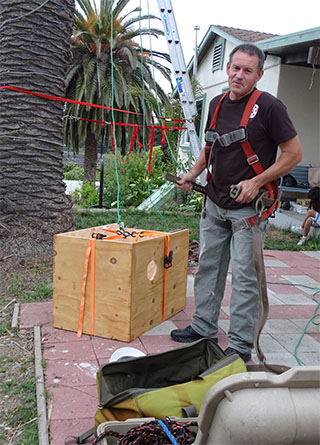 Over the past few years, Duane has gained a lot of experience installing barn owl nest boxes.

With Maureen helping, it only took about 30 minutes to get this box raised and mounted securely to the tree.

When it came time to place the chicks, the youngest one was set inside the box first, to one corner.

This is a really important rule. If you place the most aggressive baby in the box first, it will strike at each one being introduced, risking injury to the other chicks. Placing the most aggressive last and getting out of sight fast will lessen the chance of it hurting a sibling or itself. We sometimes use dark pillow cases to cover chicks until were our of view.


With the two barn owls safe and secure in their new home, we instructed the landowner to keep watch and let us know when they see an adult owl enter the box of make a food drop.

By Monday morning, we'd had an excellent response from our Bay Area Team, with seven volunteer responders were willing to help renest the great horned chicks at the golf course in Alameda. Maureen, Lisa, Kathy, John, Julene, Kerry and Patricia!

We made plans to meet at the entrance at about 5:30 PM.

While waiting for Duane to arrive with the tall ladder, the team helped put the finishing touches on the replacement nest - a laundry basket transformed into a great horned owl nest, with sticks and willow, eucalyptus bark and coyote bush.

Drainage holes were drilled into the bottom, and branches were attached to the sides of the basket for the owlets to perch on as they get older and begin exploring their treetop home. 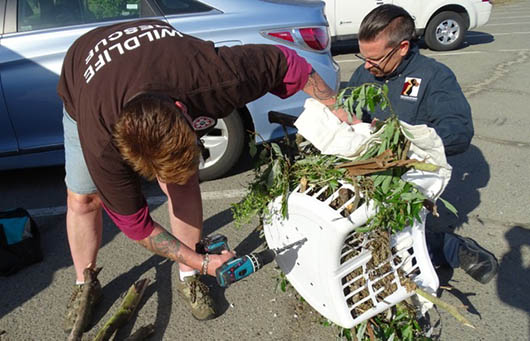 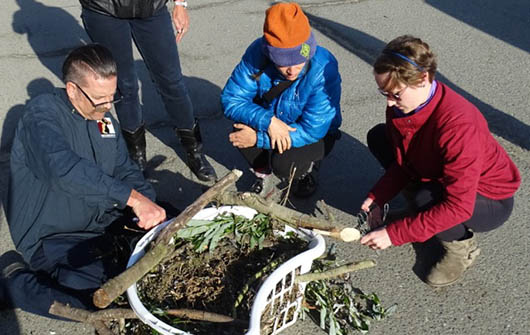 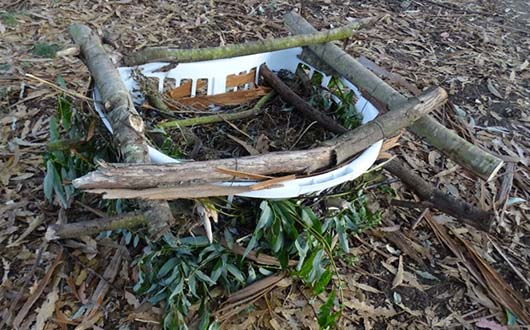 Patricia Denn generously volunteered to pick up the owlets from Sulphur Creek Nature Center and deliver them to the golf course.

Mike Prajsler, who works at the golf course and who found the first owlet the week before, he organized transport for our team - golf carts!

Once Duane arrived, we headed out to to south field.

Our first task was to look for the nest. We scoured the ground at the base of the trees near where the owlets had been found, looking for traces of a nest, urates, pellets, carcasses. Oddly, there was nothing really obvious.

Then, Duane spotted an adult, on a spit of a nest, high in one of the eucalyptus trees. We assumed it was the female. Huddled next to her was the third chick. 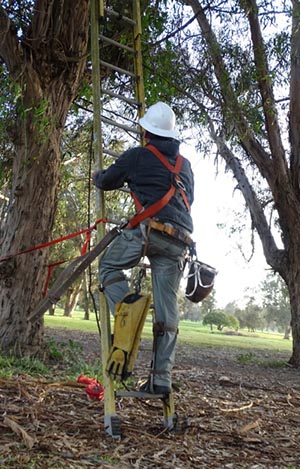 Finding the nest with an adult present meant that we could swap out the old nest for the new one, place all three chicks, and feel confident the parent would return quickly and continue caring for the chicks as if nothing had happened.

There would be no need to use vocalizations to draw in the parents, no need for someone to stay late into the night to confirm the reunion, but we would have someone check the next day.

But first, Duane had to scale the tall tree, collect the remaining chick, haul up the replacement nest and secure it to the truck.

It was windy and cold and the sun was setting, but the team rallied. I was really impressed. They supported Duane during his ascent and helped get what equipment he needed sent up. They even organized the rope box! (THANK YOU!)

Then, it came time to renest the owlets.

The chicks were placed together in a canvas bag that was lifted safely through the branches to their new home.

It went perfectly! Safe and sound.

Check out the video, below. 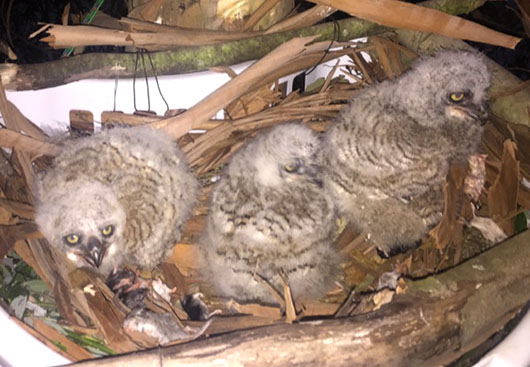 
By Monday afternoon, we'd received permission to renest the fallen great horned owlet at the Elkhorn Slough Reserve. Since there was at least one baby in the nest, there was no huge rush, so we scheduled it for Tuesday mid-day.

At about 11:30 AM we met the SPCA for Monterey County at the Reserve. They had brought the fallen owlet, plus a little orphan great horned that was about the same age, hoping we could wild-foster it into the brood.

We never want to overwhelm a parent, but if there was only one chick still in the nest, adding this orphan, to make it a total of 3, would not be a hardship, especially with the abundance of prey in the area.

Duane climbed the ladder and peered inside the box. There was only one chick. That meant the orphan had a home!

This renesting was a bit unusual. We had to work with an existing nest box installed years ago. It's flawed open-platform design allowed nestlings to reach the edge and fall.

Normally, great horned owls nest in trees, but this "open" box has been used before by a great horned.

Instead of replacing the nest with a more suitable one, we were limited to making a few alterations to, hopefully, prevent any more chicks from tumbling. We added a higher rim and some branches for them to cling to.

After making these few adjustment, all three chicks were placed inside.


A HUGE THANK YOU TO EVERYONE WHO HELPED
GET THESE SIX BABIES BACK TO THE WILD!

Support our work by making a contribution of any size, HERE, or by giving a little every month starting at $5.00.

The Freedom barn owl parents have been seen making food drops inside the box. Mike called from the golf course and said one of the adults was on the nest the following morning, and, so far, the Elkhorn Slough Reserve chicks have stayed put.

Thank you Rebecca and Duane for your fantastic work and sharing these happy stories!

What a great story. Warms my heart to know there are volunteers so dedicated.