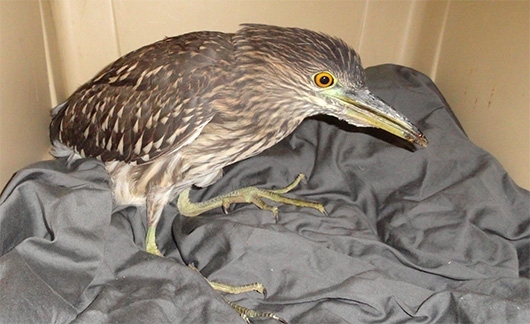 Today, I was forwarded a call about an injured heron in Hollister. Not knowing the exact species, I was curious what I would find as I pulled onto the property.

My first observation was that the area, like most drought-ridden places in California, was extremely dry. There was a small residence next to a market surrounded by open fields, no water and very few trees. 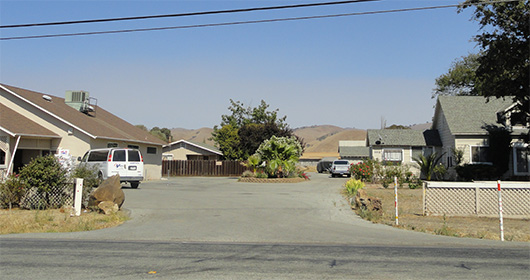 To my surprise, from around the corner of the house came a juvenile black-crowned night heron. It was likely that this was not an injured bird, but rather simply too young to fly. But where had it come from?

The older gentleman who had called was very concerned about his “new friend.” He told me about how he tends to his garden every evening, and about ten days ago this heron appeared, walking along behind him as he tilled the soil with his hoe.

He soon realized the young bird was eating the worms that were unearthed. Assuming the bird would leave on its own eventually, he enjoyed its company and continued to offer it worms and even set out a tray of water for it.

After about a week, he became concerned that the bird was not well and began making some phone calls for help. After ten days, he was finally given WES' number.

I explained to him that the bird did not appear injured, but rather couldn’t fly because it was a juvenile. But having been fed only worms for so long, it was very thin and in a weakened state. We needed to get it to a wildlife rehabilitator.

I was going to herd the bird into a corner of the yard where I could contain it. While it had become used to the presence of his Man-friend, as soon as it saw me approaching it became obviously stressed and difficult to herd it - darting and thrashing and vocalizing. I quickly covered it in a sheet and placed it into a pet carrier.

I transported the heron to the SPCA for Monterey County wildlife center where staff confirmed that the bird was extremely underweight but not injured.

Hopefully this beautiful bird will make a complete recovery and be released back to the wild.

I called SPCA wildlife today for an update on the heron. After a few days on a proper diet, the heron was strong enough to be transported to IBR.