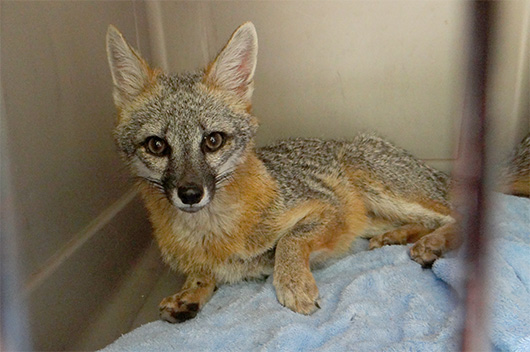 This morning WES received a call about a gray fox that was in distress in a backyard of a home in a community called Riverside Grove - a spectacular place, 17 miles from Highway way, deep in the redwoods. Beautiful.

The party who called about the fox described it as weak and not able to get up - that it was lying flat on the cool stones that lined a wash in their backyard. On approach, she said, it would lift its head for a moment. She noticed some tremors, perhaps something neurological.

When our rescue team arrived, they found the fox in the same spot, but a little more alert - it was sitting up.

Instead of immediately catching the fox, the team made preparations for its capture.

They prepared a cage for the animal, and, because there was no sign of trauma and they had to presume the animal was suffering from disease, possibly something contagious, they made sure their decontamination supplies were within reach.

With everything ready, the team donned leather gloves and grabbed a couple of long-handled nets.

Quietly, they staged on either side of the fox.

With what little energy it had left, it tried to escape capture but was netted fairly easily.

The fox was placed into a carrier and transported over the hill to the Wildlife Center of Silicon Valley.

A HUGE THANK YOU TO CALTRANS FOR ESCORTING US THROUGH ROADWORK TRAFFIC!!!

There, at the center, the fox was given a complete exam, but the prognosis was not good from the start.

The center has been getting a lot of sick foxes from Santa Cruz County suffering from canine distemper virus (CDV). In 2011 there was a spike in distemper cases in the Bay Area. Click HERE to read a news article about it. In 2013, a canine distemper outbreak killed a number of lions and tigers at a wildlife sanctuary in Texas. Click HERE, to read more. A National Geographic article, HERE, explores the serious threat of CDV and the world's remaining wild tigers.

Sadly, this fox was exhibiting signs of the disease - head and facial tremors, nystagmus, weakness - unable to stand, hyper salivation. It was euthanized to end its suffering.

Canine distemper is a highly contagious disease that can involve  the respiratory, nervous, and gastrointestinal systems. It's spread through through the air, direct contact with an infected animal or its bodily secretions. Canine distemper can cause wild animals to behave abnormally, appearing confused, disoriented, even tame.

The domestic dog is said to responsible for introducing canine distemper to wild animals and, today, it poses a serious threat to many species. Scientists believe the virus may have contributed to the extinction of the thylacine. It nearly wiped out the black-footed ferret. In 1991, it was responsible for a 20% decline in the lion population of the Serengeti region and recurs among African wild dogs, threatening the species survival.

What you can do to reduce the spread of this horrible disease.