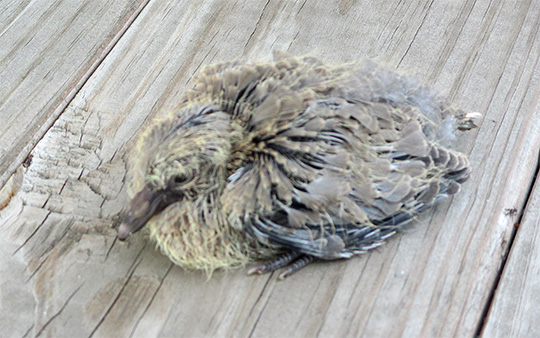 This morning as I was headed to my job in Carmel, I received a message from a friend who shares my love for animals. Her sister is a teacher at an elementary school in Hollister, near where I live, and one of her students had brought her a baby bird that was found on top of a lunch table.

I had her sister text me a photo which confirmed it was a nestling dove.

I asked a few basic questions (Was it injured? Did it look puffed-up and cold?), and, from her answers, I felt pretty confident that the bird was in good health, it just needed to be placed back in its nest.

This lead to several more questions (Where was the nest? Could she reach it? Were the parent birds in the vicinity?), which, she did not have the answers to.

I realized re-nesting this young bird wasn’t going to happen anytime soon, with all of the teachers in classrooms and my ability to respond would be later in the day, after work. I had to make a quick decision – do I let her keep the bird in her classroom for several hours, where it would be warm and quiet, but without food, or do I advise her to put it back outside, as close to the where she found it as possible, vulnerable to the elements and possible predators (and children)? I chose the latter.

It was a clear, sunny day and I had a gut feeling that the parent birds were there, and the baby needed to be fed.

If humans hadn’t intervened in the first place, it would still be sitting on the lunch table where the parents had last seen it.

The teacher vowed to put the baby back. 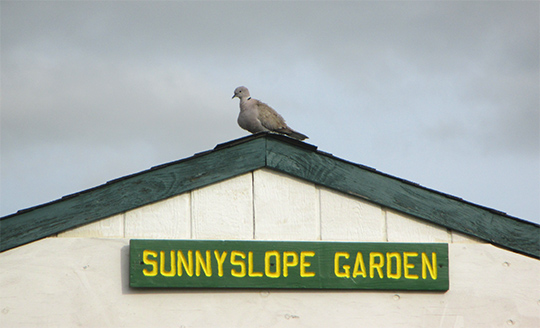 I worried about the bird all day.

It was late afternoon when I finally made it to the school. Mrs. Sanchez had been kind enough to stay late to open the gate for me.

I took one step towards the area and stopped. There was an adult Eurasian Collared dove sitting on the roof of a shed. A few feet below was the nestling lying on the picnic table.  Yes! The parents had been caring for it just as I had hoped.

I surveyed the area further. I was so impressed with the choices this teacher had made.  She knew she couldn’t place the bird back onto the lunch table because the students would be using the area throughout the day, but, next to the lunch area is a small garden, completely enclosed by a chain link fence. She had placed the bird in this area, knowing if the parent birds were in the vicinity they would see the nestling. Perfect!

I assessed the baby bird and found it to be in a great shape – no obvious wounds or signs of trauma and it was warm to the touch. It was vocalizing, too, and the parents were responding.

I placed the baby bird back on the table so the parents could continue feeding it, then asked Mrs. Sanchez to show me where it had been found earlier that morning.

Directly above that lunch table, tucked into the corner of the roof's metal framing, was the nest, about 14 feet from the ground.

I knew my husband would have just the right ladder for the job. About an hour later, he arrived with a ladder tall enough to reach.

The sun had just set. While Chris was setting up the ladder, I tucked the nestling into my shirt for warmth. One of the parents flushed as soon as the ladder was set in place. Knowing there should have been 2 nestlings, I feared the other missing or dead.

Chris climbed the ladder to have a look. There, he found a haphazard “nest” made up of a few long twigs side-by-side on a ledge no wider than a dove - maybe 3 inches. He also found a sibling!

So, it was obvious what happened. There was just no room for two birds on the ledge and nothing to prevent the babies from tumbling to the ground.

I knew if I simply placed the baby back on this narrow ledge, chances are it would fall again and risk injury.

Even though the collared dove is a non-native species, we were going to treat this family as we would any other.

I drove home - just a few minutes away, and grabbed some supplies and a small, plastic basket that we could use as a replacement nest. 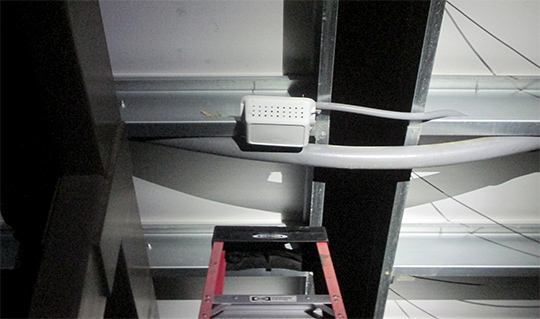 First, I removed the sibling. Then, Chris secured the basket to the ledge with fasteners and cable ties. Then we placed the original nesting material in the basket and, finally, set both nestlings inside. 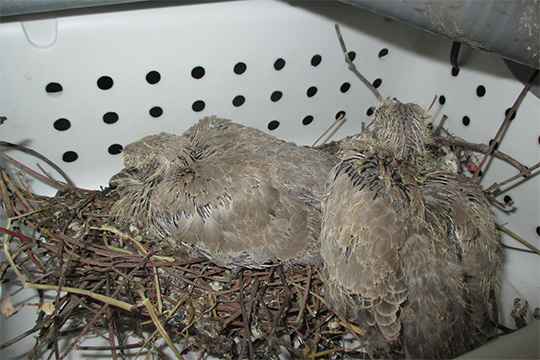 We picked up all of our equipment and walked back to our vehicles and about 15 minutes later I watched as one of the parents flew to the new nest. Success!!!

We left having instructed the teacher to speak with the principal and the custodian and make an announcement tomorrow about the birds and to remind students it’s important to be kind to all animals.

Baby season is fast approaching. If you'd like to be part of our Reuniting and Wild-Fostering Team 2016, please sign up to volunteer HERE and we'll get you trained.

We need teams in the East Bay, San Jose area, Monterey, and Santa Cruz.
Must be 18 years old or a parent-child team.

If you'd like to support our rescue and reuniting programs, donate now!

A little goes a long way!

Thank you for your time and effort in an awesome job saving these two baby birds!! Love their new basket nest!!