Speaking of cats and wildlife 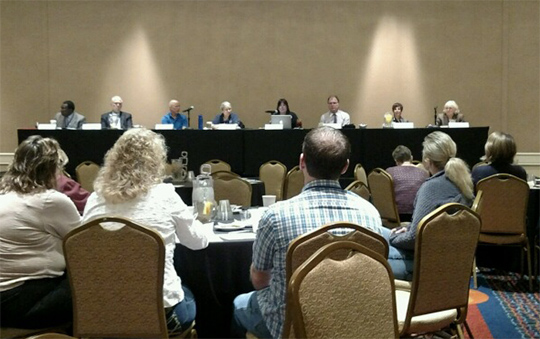 Rebecca shared her experiences and views on the impacts that free-roaming cats have on native wildlife and ecosystems. She compared cats to other domestic animals, like dogs, pigs, goats, that can eek out an existence in most environments. But, the damage they can cause to ecosystems and the risk they pose to public health and safety is why domestic animals are not allowed to run free, unmanaged. She questioned why cats were treated differently.


She also explained why cats do not belong in the wild, because wild species of birds and small mammals adapted survival mechanisms based on certain predators in a region. But, the domestic cat - a pint-sized-panther - is a skilled predator that hunts both night and day and in large numbers - in some cases, hundreds per square mile, that no wild species has had time to adapt to.

Rebecca went on to share an excerpt from a 2013 paper published by researchers with the Smithsonian Biological Conservation Institute:

We estimate that free-ranging domestic cats kill 1.4–3.7 billion birds and 6.9–20.7 billion mammals annually. Un-owned cats, as opposed to owned pets, cause the majority of this mortality. Our findings suggest that free-ranging cats cause substantially greater wildlife mortality than previously thought and are likely the single greatest source of anthropogenic mortality for US birds and mammals. Scientifically sound conservation and policy intervention is needed to reduce this impact.


Using the American robin as an example, she pointed out how birds can be impacted. Robins can produce 1 - 3  clutches of up to 5 young per year. Each, a heavy investment. From staking of territory, courtship, nest building, careful incubation of the eggs, then, the tedious work of feeding their helpless hatchlings, requiring more and more, trip after trip after trip, both parents working tirelessly to feed their young. When the young are almost old enough to fly, they fledge. They flutter to the ground where they spend about a week learning to fly. Most bird species go through this stage, and, where there are cats outdoor, fledglings stand no chance, whatsoever - the parents lose their entire investment.

A few lucky ones might be rescued from a cat’s mouth and admitted to a licensed wildlife rehabilitation center, and some may survive, but, these patients - often requiring daily antibiotics place an extraordinary burden on wildlife hospitals, costing $50.00 to $200.00 per patient, not including staff-hours.

Rebecca pointed out that there are laws prohibiting the release of non-native invasive predators and questioned why cats are allowed to roam free without consequence.

Free-roaming cats also impact the environment through their waste. Toxoplasmosis is a disease caused by infection with a protozoan parasite Toxoplasma gondii, which relies on felids - cats -  to complete its life cycle. Infected cats shed hundreds of millions of oocysts, or eggs, into the environment. These eggs remain infectious to all warm-blooded species for up to 18 months.
In coastal California, many sea otters have died due to toxoplasmosis, and scientists suggest the parasite is transported in freshwater runoff to aquatic environments, where both animals and humans can become exposed. This research also contends the domestic cats in this region may play an important role in the marine infection.

Panelist, Gary Tiscornia, Executive Director for the SPCA for Monterey County, gave an excellent presentation on his organization's approach to the feral cat issue, also pointing out how feral cats impact wildlife and the environment and acknowledged what difficult lives feral cats have, being exposed to the elements, disease, and predators. Next, WES' director traveled to Newport Beach to participate in the Vertebrate Pest Conference, where she spoke on non-lethal methods of dealing with wildlife pests, in a presentation entitled Making a Killing Without Killing.

Close to 90 people attended her talk.

leisha: learning as i go said...

The largest threat is human. This battle against cats is so aggravating and based on estimates and is prejudiced as well as supportive of aggressive acts of inhumane poisoning and other methods designed to kill felines. Calling it science is deceptive no matter what field you are in and what degrees you may have obtained.

When people can't reply to the issue at hand they often try to deflect. As in, humans are a bigger problem, why do we worry about cats? That argument is no more valid than saying heart disease kills more people than cancer, so why do we get all worked up about cancer.

Cats are in fact an anthropogenic source of wildlife mortality. One of the many way humans damage our environment is by releasing and subsidizing non-native invasive predators which far exceed the carrying capacity of an environment. The damage cats cause on wildlife is immense, as has been proven time and time again by peer-reviewed scientific research. The cat hoarders will do everything possible to defend these animals all while not blinking an eye when it comes to the BILLIONS of wild animals that are needlessly slaughtered by cats each year.