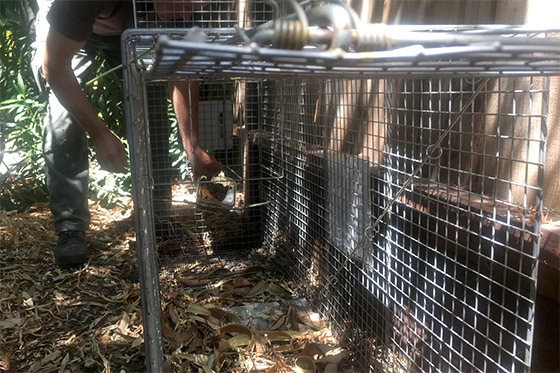 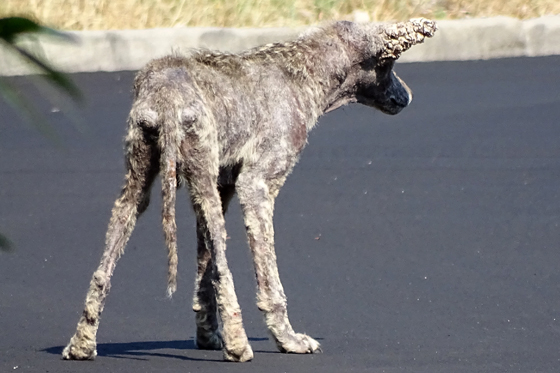 Last week, WES received word about a coyote with a severe case of mange, roaming the streets of Danville, CA. WES' capture experts Duane Titus and Rebecca Dmytryk drove to Danville on Saturday to look for the animal and get a feel for the area.

With help from residents and the Danville Police Department, they were able to locate the coyote and make a few live-trap sets, but there were too many people out enjoying the weekend for any capture attempts to be successful. They will try again this week.

In the meantime, a couple of locals have stepped up to help, monitoring a social media site called Nextdoor for posts about the coyote - when and where it's being observed. We're keeping track of sightings hoping to narrow in on a good spot to try and capture the wild dog. 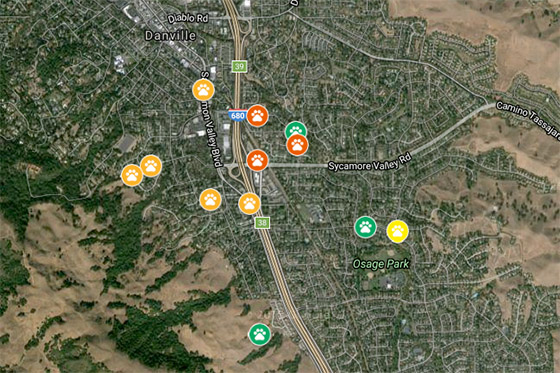 For the most part, the community seems more concerned for the animal's welfare than anything else. The fear level is low, as it should be. This adult male coyote is not a threat to people and it has been observed walking by dogs and cats, showing little interest.

However, free-roaming cats are always in danger of being killed by other animals or cars, so it's best to keep them inside or at least provide them with an outdoor enclosure like a catio. Owners of small dogs should also take precautions, making sure their yard is predator-proof, and, on walks, small dogs should be on short leads, no longer than 6 feet. Contact Humane Wildlife Control for help making your backyard coyote-proof.

Although coyotes do not see humans as prey - not even small children, they will follow people. They aren't stalking, but hoping the person leads to food they can scavenge - like jackals in Africa follow lions.

While we rather people not frighten this particular coyote, in general, it is best to tell coyotes "No!" - to "Go Away!", so they don't get too comfortable around people. It's called hazing. Check out the instructional video, HERE.

This particular coyote is suffering from mange - a skin condition caused by mites that burrow into the skin. Although he looks horrible, he's treatable. We hope to capture him in the coming weeks and deliver him to one of the area's wildlife hospital where he can receive treatment and be returned to the wild.

While the symptoms of mange in coyotes looks similar to what we see in bobcats with mange, the type of mite is different, and so may be the underlying cause. In bobcats, there seems to be a connection to the disease and exposure to anticoagulant rodenticides found in rat poison. After consuming bait, rodents die out in the open where predators and scavengers find them.

The secondary risk to wildlife is so great, the Environmental Protection Agency restricted availability of these poisons to the general public, but they are still widely used by the pest control industry. More on how these poisons impact wildlife, HERE. The only wildlife-safe rodenticide is RatX.

It's not clear, yet, if exposure to poisons or pollutants is related to mange in coyotes, but it is treatable. Help us track down this coyote by reporting sightings to your Nextdoor page or contact the Danville Police Department, or you can email rebecca (at) wildlifeservices (dot) org. Thank you!

Check out the video from Saturday.


Over the years, my friend and colleague Jay Holcomb would speak often about the need for a boat to conduct proactive searches in marinas - along jetties and breakwaters where ailing birds tend to congregate - places that are impossible to reach without a boat.

We used to talk about how great it would be to locate and capture injured and ill pelicans sooner than later, before they're too compromised, giving them a better chance of recovering.

A Pelican Patrol, we'd call it.

Jay died in 2014 before his dream could be realized. It is time we make this happen.

Please help us turn this dream into a reality by making a contribution of $100.00 or more, HERE. If you rather send a check, please write Pelican Patrol in the memo section.

The boat will be named The Jay Bird in honor of Jay Holcomb.

Thank you for your support. 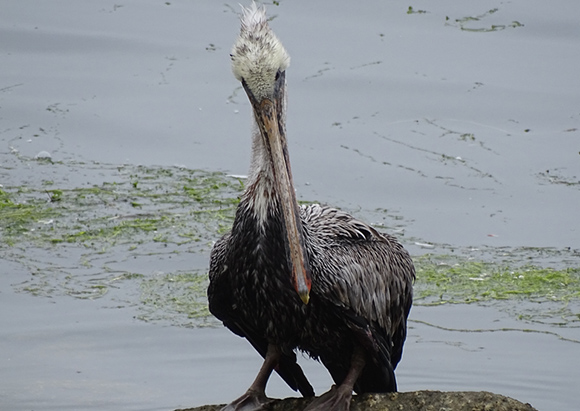 This morning, WES was notified by International Bird Rescue of two ailing pelicans at Pillar Point Harbor in Half Moon Bay. The reporting party had observed a very sick pelican on a rock, weaving its head back and forth. This is an indication of domoic acid poisoning - often treatable in birds.
WES directors, Duane Titus and Rebecca Dmytryk, drove from the Santa Cruz area and arrived on scene around 1:00 pm. They quickly found the ailing pelican.

Although the pelican seemed a bit "out of it", Duane used precaution, approaching it very slowly. Check out the video below. 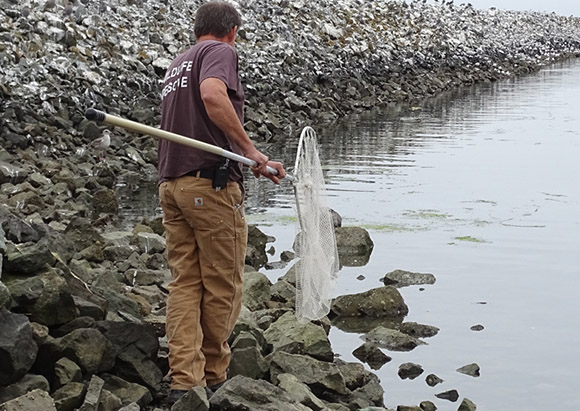 The bird was placed on a heating pad inside a crate and transported over Highway 92 where Peninsula Humane Society transported it the rest of the way to PHS' Wildlife Center in Burlingame. 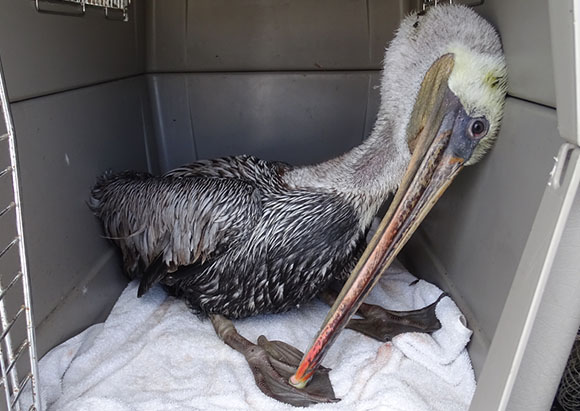 The second pelican was entangled in fishing line. According to the RP, the young pelican has been entangled since July 19th.

Using binoculars, the team scanned the pelicans on the breakwater and jetties but could not locate this particular bird. They did, however, observe a pelican that appeared weak. Unfortunately, it would take a small boat to get to it. Something WES desperately needs.

We have just launched a campaign to raise funds for a rigid inflatable boat, like a Zodiac, that can reach the breakwaters and jetties where ill and injured birds tend to congregate.

This was a dream of our dear friend and colleague, Jay Holcomb, who passed away in 2014 - to have a boat dedicated to proactive searches of marinas and harbors to look for ailing pelicans and other marine birds in trouble. A Pelican Patrol Boat. We plan to name the vessel in Jay's honor - The Jay Bird.

Please help us raise the funds to acquire a Pelican Patrol boat by contributing HERE. We're offering various levels of support including the opportunity to join us on patrols in various marinas in California.

Another skunk in a rat trap - rescued 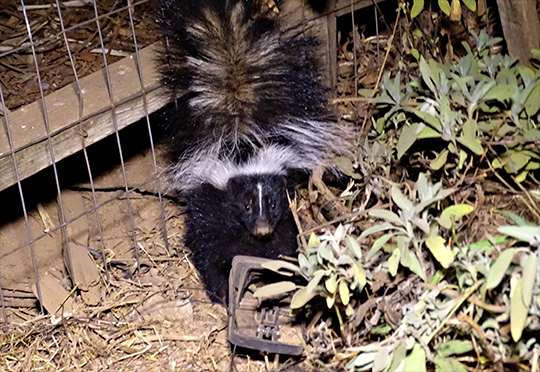 This evening, we were called out to rescue a skunk that had been left to die in a rat trap at a residence in Bonny Doon.

The homeowner had noticed the skunk in the trap earlier that morning but it was barely moving so they left for the day, only to return to find the skunk was very much alive - just more awake, as it was nearing nightfall.

The trap had been set outside to kill rats around a chicken coop. The coop was not constructed with the right material to prevent rodents from getting in, so it's been a great attractant to rats and mice, and, the carnivores, like skunks, that eat them.

Snap traps are not meant to be set out in the open where other animals can get to them - but that's not made clear on the packaging. This brand, one of the newer heavy-duty traps with interlocking teeth made by Bell Labs and distributed by Scotts Miracle-Gro, is particularly dangerous to non-target animals.

Because of the number of animals being caught and mortally wounded in these traps, we contacted Bell Laboratories and Scotts Miracle-Gro, asking them to add warnings on the packaging.

In March, Bell Labs responded by adding some language to their online product page and sell sheet, promoting use of a protective box to prevent exposure to children, pets, and wildlife. We'd hoped for more, but it's a start.

Scotts Miracle-Gro Company was receptive, indicating they would look into adding precautionary language and developing content on their product pages and tutorials, but we have yet to hear back from them. We'll be sharing this latest casualty with both companies.

In the end, the little skunk was freed from the trap, but he was badly injured. Check out the video, below.

The trap had snapped down on the skunks humorous. The leg was very badly swollen, having been in the trap for possibly 24 hours. We delivered the animal to Native Animal Rescue's skunk expert, Monique, where we hope it will make a full recovery.