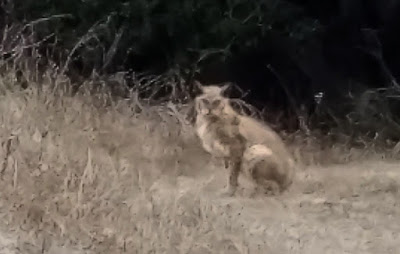 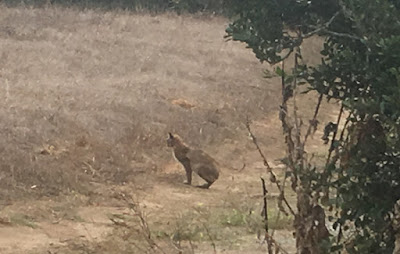 Over the last couple of weeks, there's been a bobcat with mange spotted on the Elkhorn Slough Ecological Reserve property. Most likely suffering from Notoedric mange, caused by ear mites.

Research suggests exposure to anticoagulant rodenticides from eating poisoned rodents increases an animal's susceptibility to mange. Read all about it, HERE and HERE.

Thankfully, there are no such poisons used on the preserve. If the animal was exposed, it could have been from one of the surrounding properties or agricultural fields.

Either way, the animal needed treatment, and fast.

Dave Feliz, manager of the reserve, gave the go ahead for us to attempt to capture it, but first, we'd need to find it.

It had been a few days since it was last sighted, but seemed to hang around the flats near the Long Valley and Five Fingers trails.

The reserve is normally closed to the public on Mondays and Tuesdays and Monday was a holiday, so, we decided to try this morning.

As luck would have it, when I arrived, one of the biologists working the reserve had just seen the cat crossing the Long Valley trail. Perfect!

Mike was willing to show me where he'd seen the cat, but that's not where we intended to stage the capture equipment. In this case, we wanted to set up capture equipment a distance away from the animal, so not to spook it, then use sounds to draw it close.

As I drove to a location I thought the cat would return to - a place I'd seen it before, there she was - slinking through the dry grass for the cover of a large oak tree. She sat in the shade, watching, as I drove by.

I kept my eye on her until I got about 60 yards away and out of her direct line of sight so she would not move off.

There, in the shade of an oak, I set up the cage trap. It's a long metal cage with a separate partition for live animals. I placed one of our two poults inside the separate cage. These are young chickens that are accustomed to cats, dogs, travel and handling. 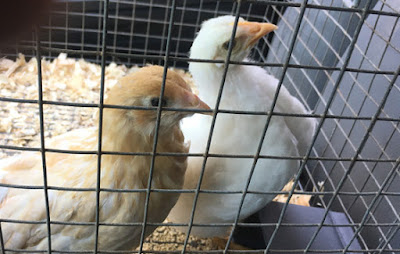 I thought to separate them so they would call for each other - their peeps would bring the cat close to investigate.

I drove back to the visitor center and watched and listened. I could hear the chick across the field.

After about 30 minutes or so, she settled down and stopped calling, so I walked the other chick out to the trap and placed it inside. They immediately started peeping. Good.

I figured I'd check again in an hour.

When it was time to check, I took the truck, thinking I might just park there and watch from a distance. As I started to turn onto the Long Valley trail, there she was! I immediately switched gears and slowly backed the truck until I was out of sight.

I rolled down the windows, cut the engine and just listened. I heard the peeping - the chicks were chattering to each other - good.

About five minutes later, I heard them alarm-call, then I heard the trap door slam shut - I just hoped the cat was inside...


I called Mike to help lift the cage, and moved the chicks to their travel cage. (Thank you Mike!) (Thank you chicks!)

We got the cat loaded, covered with a dark sheet, and I headed for the Wildlife Center of Silicon Valley in San Jose. 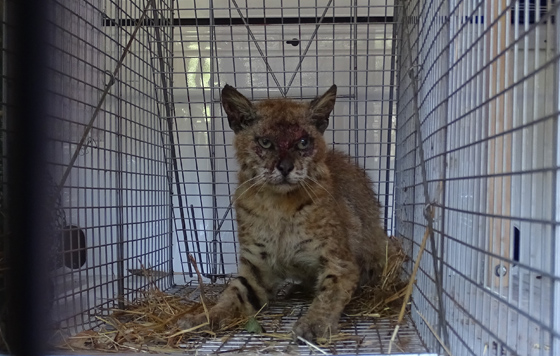 There, the older female bobcat, estimated to be about 4-5 years old, was sedated, examined and given fluids. She received an initial treatment for mange before being placed in an enclosure where she'll be monitored closely. 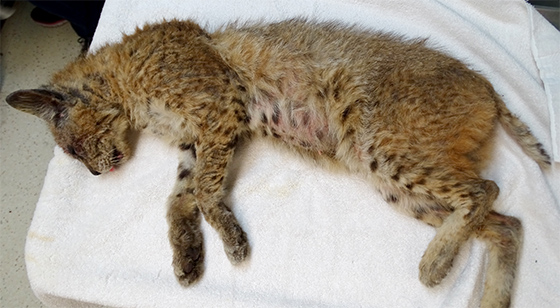 Blood tests confirmed our fears, the bobcat tested positive for exposure to rodenticide poisoning. She will be on medication to counter the anticoagulants until her release.

Anyone interested in providing a loving home for these two famous poults?