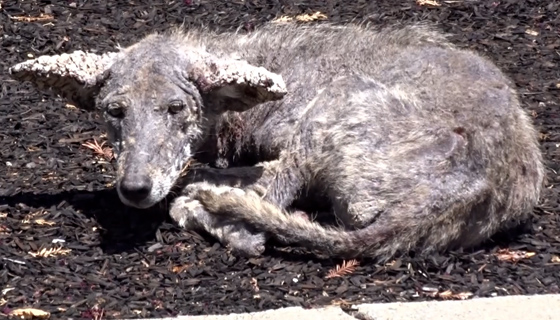 We received word from a citizen that at about 12:20 today the coyote was struck and killed by a vehicle. The County Animal Services picked up the carcass. We are hoping to get his body to the Wildlife Investigations Lab in Rancho Cordova to further research of coyotes with mange. At least maybe he'll contribute to science...

In mourning the loss of this animal, I can't help but feel for those who fear and hate coyotes... or wolves, or mountain lions, or sharks...

When we saw him he was standing in the middle of the intersection and not at all scared by the traffic. With his coloring he blended in well with the pavement. Sorry it ended this way. 😓

Thank you, Wildlife Emergency Services and Nancy Gibbons for everything you did to help our coyote. I am sad he died this way. RIP little coyote.

His body needs to be sent to the lab that is studying RODENTICIDES and their effect on the well being of creatures who eat smaller animals that WE POISON. Was this coyote's entire system compromised/weakened from having eaten poisoned mice? The Danville coyote's death is tragic; let it not be an entire loss; we can learn from our mistakes, our inability to have treated him properly, medicated him to cure the mange....... What laboratory has he been sent to and will they test for rodenticides in his body?

Hi Ruth, thank you for your concern regarding anticoagulant rodenticides that can, yes, result in illness and death after animals consume rodent that have eaten poison - rat and mouse bait or poisoned gophers and ground squirrels. It's a pervasive issue throughout the states, however, there has been no study directly linking exposure to anticoagulant rodenticides and mange, even in bobcats (though it seems like there is some sort of relationship there), and with coyotes, like this one, suffering from sarcoptic mange (scabies), there's been no study linking the disease with rodenticide. However, I think it will be good to know if he was exposed, being so close to people for so long.