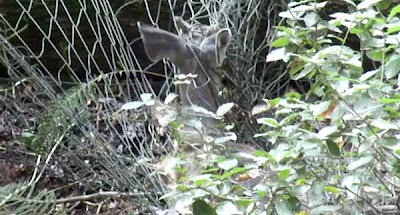 In the ocean, seine nets, like gill nets, are large panels of netting that hang vertically in the water - held up by floats and held down with weights. This fishing method is so effective, the practice must be regulated to reduce bycatch of non-target species.

Abandoned or lost nets pose a significant risk to sea life. If you're interested, HERE is a 2009 report on and toll of abandoned fishing gear, with some staggering figures.

Netting is netting on land or at sea. Left unattended, nets ensnare, maim, and kill indiscriminately.

Here is a recent example of how a panel of netting, just like a fishing net, was left unattended in a forest and nearly killed a young deer.

A couple was walking near their home off Branciforte Drive in the wooded hills above Santa Cruz, when they happened to notice a young black-tailed deer entangled in netting material, about 30' off the road.

The one-year old buck was stuck in a very tall, very wide panel of nylon netting, strung alongside a creek. This type of netting, often referred to as utility netting, is used, for example, as perimeter fencing around sports fields, golf courses, and batting cages.

The residents phoned the Santa Cruz Animal Shelter, and WES was called to assist.

On scene, Officer Michael Sharp and WES' Rebecca Dmytryk worked together to untangle the traumatized animal. Check out the video:


Once freed, the animal bolted for safety - a good sign that it will recover from the ordeal.

Prey animals, like deer, can suffer from something called exertional myopathy. It occurs when high-stress animals are pursued, captured, or restrained. In very simple terms, in struggling to get free, an animal's muscles may be damaged beyond repair. There is no cure for EM, only prevention.

As for the netting. WES' director has contacted the California Department of Fish and Wildlife to ask that they look into this incident and have the netting removed from the forest.