Scientists consider the beaver a keystone species of a healthy ecosystem, playing a crucial role in biodiversity of wetland habitat. Beaver have been missing from the San Jose area for more than 150 years... until recently.

Beavers residing near downtown San Jose (affectionately being called Beavertown) were discovered in March when naturalist Roger Castillo, founder of Salmon and Steelhead Restoration Group, was walking along the river and noticed a willow tree with distinctive beaver markings. He notified Greg Kerekes, of Urban Wildlife Research Project (UWRP) who set up trail cameras under the willow and captured images of not one, but three beavers (video) - a female and her offspring.

The beavers are believed to have originated from the Lexington Reservoir in Los Gatos, where they were re-introduced in the early 1990s.

The appearance of the beaver family on the Guadalupe River coincided with removal of illegal encampments along the waterway - a good indication that the river can, once again, be the rich ecosystem it was.

Because of their tendency to construct dams and cause flooding, beavers are not always welcomed, especially in an urban setting. A coalition of urban wildlife supporters, spearheaded by Kerekes and Guadalupe River Park Conservancy (GRPC)  convinced Santa Clara Valley Water District to allow the beavers to stay.

On Monday, July 7th, Kerekes noticed that one of the three beavers he'd been monitoring - the adult female, had something wrapped around her midsection. See the video, HERE. He thought it might be some sort of manmade debris. He alerted a network of Bay Area beaver supporters, including GRPC and Martinez-based Worth a Dam.

WES was also notified of the injured animal and received authorized from California Department of Fish and Wildlife to lead search and rescue efforts.

WES' founder and director, Rebecca Dmytryk, reviewed Kerekes' footage and agreed it looked like a plastic ring, like a packaging strap.

The strap around the beaver's waist hindered her mobility and would eventually cut into the her skin. The animal needed to be captured quickly if it was to survive.

On July 9th, WES assembled a rescue team consisting of representatives from GRPC, City of San Jose Parks, and UWRP. For three consecutive nights, two large cage traps were set near the willow. They were monitored continuously from sunset to midnight, but the beaver never appeared.(A huge Thank You! to everyone who took a shift!)

As Dmytryk explains in her book, Wildlife Search and Rescue, establishing an animal's pattern is key to a successful capture plan. At this point, there was little to go on.

The team increased daylight searches along the banks of the Guadalupe River and Los Gatos Creek looking for the beaver's lodge and signs of foraging, but found nothing. On July 15th, Duane and Rebecca met a warden with the California Department of Fish and Wildlife for a 5 a.m. search using spotlights and a FLIR (Forward Looking Infrared), but the beaver was not found.

That afternoon, though, Kerekes' camera caught the beaver on the bank by the willow, just about an hour before the team had arrived. She was back in the area!

Later, the team set a cage trap and monitored it from the trail above. This time, they actually saw her come ashore and explore the riverbank. She appeared slower, possibly weaker. See the video HERE.

Later, the team set one of the traps and monitored from the trail above. This time, they actually saw the injured beaver. She appeared slower, possibly weaker. 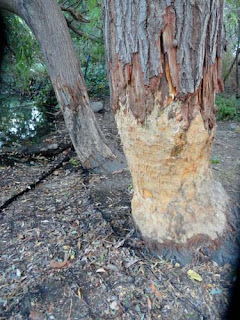 Unfortunately, the beaver never entered the trap, but the sighting was incredibly valuable. It confirmed she was still alive and proved her fidelity to the embankment beneath the willow.

Last night, a sophisticated netting enclosure was set up under the willow.

Duane, an electrical contractor by trade, rigged lights in the trees to aid in the nighttime capture. 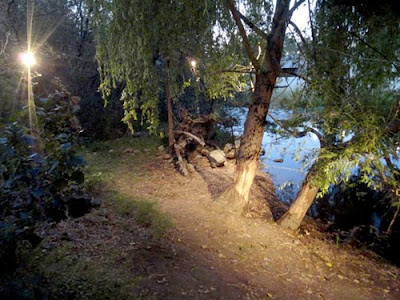 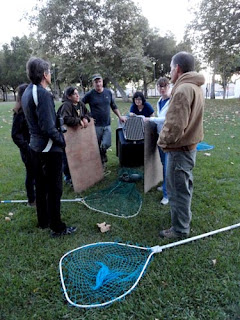 By 7:30, the rest of the team - consisting of wildlife handlers from Happy Hollow Park and Zoo, GRPC, and UWRP arrived at Guadalupe River Park. After a run-through, they settled in to wait for the beaver, which could have been hours. 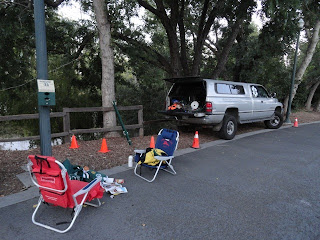 At about 8:30, Leslee with GRPC radioed from across the river that she spotted the beaver heading for the bank. Everyone took their assigned positions.

Duane and Rebecca crouched in tall grass overlooking the embankment, Duane's hand on the rope that would pull up the net and entrap the large rodent.

It was dark except for a few streetlights and their reflections on the water. As the beaver approached, ripples gave away her location. When she climbed onto land, it was the light reflecting off her flat tail that allowed us to see her movement. She didn't seem to notice the netting material she passed over on her way to our offerings - a pile of freshly cut willow branches, cottonwood and fennel.

She was clearly within the enclosure. Duane pulled tight on the rope, raising a wall of netting. Rebecca called out "Lights!". Duane handed control of the rope to Mike and raced down the trail, netting the beaver in an open-ended hoop net. Greg from Happy Hollow used a second net to secure the animal. The two of them worked to cut the chord from the animal's body. Sure enough, it was a packaging strap - like the ones used to bundle newspapers. 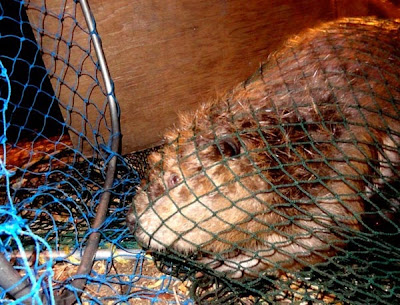 The rest of the crew had assembled with herding boards and the transport carrier. Working together, they manipulated the animal into the crate without ever having to touch it.

Ashley Kinney, Wildlife Rehabilitation Supervisor with Wildlife Center of Silicon Valley was alerted and agreed to meet responders at her facility to give the animal a quick exam.

Beavers can overheat when out of water and under stress. Our newest responder, Dana, transported the animal in her vehicle with the air conditioner on high, blowing into the carrier.

The beaver appeared to be in excellent condition and able to be released back to the wild. Ice packs were placed under a towel to keep the animal cool for the return trip.

The rest of the crew had just finished taking down the net enclosure when Dana arrived. The crate was carried down to the willowwill where Greg Kerekes opened the crate door to release his wild friend.

The beaver took a few deliberate steps to the water, submerged her head, then slid into the river. With a slap of her tail she disappeared into the darkness.

Please consider supporting WES' efforts to help animals in distress with a donation of any size, HERE.

We would also like to encourage you to donate towards the purchase of additional trail cameras for Urban Wildlife Rescue Project, HERE.

Would you like to become a Wildlife Emergency First Responder? Go HERE to sign up to volunteer.

Learn wildlife capture techniques like the one used in this beaver rescue in Wildlife Search and Rescue: A Guide for First Responders.

Do you have any idea why this beaver couldn't chew this strap off herself? Seems she's equipped with a nice set of scissors for teeth right?

Well done, WES! Your rescue stories are amazing and heartwarming... and the videos are always nice to watch. This beaver was fortunate to have you caring about her.

Move over skunks, raccoons, sea birds and big cats; the beavers are making a splash.
you guys (and gals) are amazing.
The luck of that creature to be seen by someone who cared enough to actually do something seems incredible.
Thank you for all that you do!

If she could have gotten her teeth squarely on it, she probably could have, but we believe it was just slipping over her incisors, like dental floss : )

YAY, another great rescue! The patience and caring of everyone involved is SO heartwarming! Lucky beaver! Yeowy, they sure get big!

I'm so glad beavers are back. Great job saving this one, WES!

Great Job to all of you involved. Thank you for sharing this and all of the stories you have sent us. Rebecca I also just ordered your book, Wildlife Search & Rescue, for my department. Thank you for all of your great work!

How wonderful to hear this amazing rescue and even more amazing that these animals have returned to this area!!! Thank you so much for saving her from what I am sure would have been a sure death..Wow..and I thought my saving the baby duck downtown friday night was a big deal...:) Long live the beavers!!!!!!!!