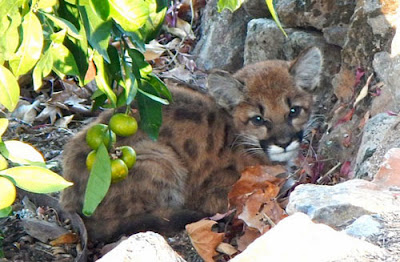 According to reports by residents of a neighborhood near Alum Rock, an adult mountain lion was observed crossing Mt. Hamilton from Ridgeview Way at about 6:30 in the morning on October 4th. That weekend, residents found a half-eaten deer and the remains of a domestic cat. Allegedly, on October 9th, a cub was a seen in a backyard off Enchanto Vista.

Not far from there, on October 15th, a cub was found huddled at the base of a rock wall in a residential yard. The homeowner reached out to the Wildlife Center of Silicon Valley (WCSV) for help. Wildlife Emergency Services (WES) was contacted for assistance.

WCSV and WES collaborate on rescues quite often, with WCSV being the hospital and WES providing assistance with capture and transport, but mountain lions require special authorization by the California Department of Fish and Wildlife.

Mountain lions in California are a “specially protected” species and may not be taken, possessed or transported except under specific circumstances.  New legislation (Senate Bill 132) makes it easier for the Department to collaborate with outside sources, giving it the authority to work with qualified individuals or organizations.

After speaking with the reporting party, WES notified CDFW.

A warden was on scene quickly, but the cat was gone.

On October 17th, about a half-mile away, residents reported hearing a loud, frightening growl outside their home one night. 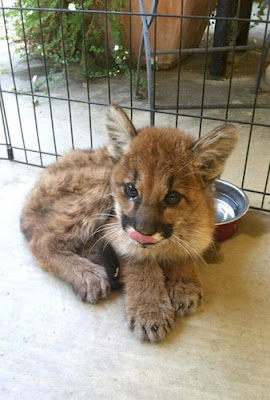 Two days later, in the morning, the family's dogs started barking at something outside. They checked to see what they were barking at, and found a small, frail-looking lion cub, too weak to escape over a three-foot retaining wall.

Family members used a folding dog pen to confine the cub, then alerted the Wildlife Center of Silicon Valley.

Wardens responded to find the cub still in the dog pen. They transferred it to a carrier and transported it to WCSV .

The young lion, estimated to be about 3 months old, was given a thorough examination. The cub was found to be severely dehydrated, anemic, and emaciated, weighing only 5 pounds. It was started on supportive care.

By Monday morning, the little lion was looking much better. It was transferred to the CDFW Wildlife Investigations Lab, outside of Sacramento, a few days later.

This recent mountain lion rescue is an excellent example of collaboration between the California Department of Fish and Wildlife and local wildlife rescue organizations, resulting in a speedy and proficient response to an orphaned mountain lion cub.

I hope in time this new law which provides that these animals can be rehabilitated will be expanded to provide for their release in a proper area. It is a shame that they must spend their lives in confinement. They are an apex predator and are needed in the wild to manage the many other wildlife species from overpopulation/starvation such as deer, elk, rodents.

Thank you for the update and for your rescue of the cub, I'm an Alum Rock resident who has been following this story on our neighborhood listserv. What will CDFW Wildlife Investigations Lab do with the cub? Assuming the cub can be restored to good health, is there any chance he can be returned to the wild?

Thank goodness the laws have changed enough that you were able to help this poor little guy!

A heartwarming story. Such a happy ending for the little guy! : )
Thank you to all of the caring, careful people out there.

So what happens now that Fish & Wildlife has him?

Thank you so much for your work in getting the CDFW to change their policy toward mountain lions. The killing of those 2 young mountains lions by CDFW months ago was so tragic and angered so many people. Thanks for rescuing this little guy!