Cooper's at the Cathedral 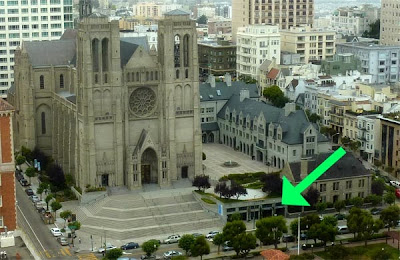 Yesterday, we received word of a juvenile Cooper's hawk entrapped inside the parking structure of the Grace Cathedral in San Francisco.

It had first been observed on Sunday, when it was spotted on the third level. There was no way for it to escape unless it went down - something unnatural for a raptor to do.

The bird was not going to find its way out of this labyrinth and waiting for it to weaken would be its demise - it needed to be captured, and soon!

Capturing a hawk inside a building can be very labor intensive. There are only two ways to go about it safely: using a type of baited trap, or large panels of netting - but never chased with nets!

With so few volunteer responders in San Francisco, our response was delayed, but, thankfully two of our lead responders, Mark and Susan, were available Tuesday morning. 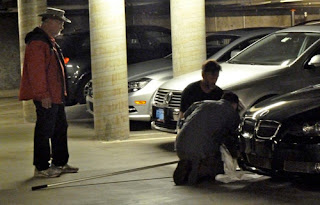 Our responders arrived at 9:30. They were joined by Eddie, with Nature Trip, and the couple who first reported the bird. Craig from Golden Gate Raptor Observatory was also on site. He brought a trap designed especially for small hawks. 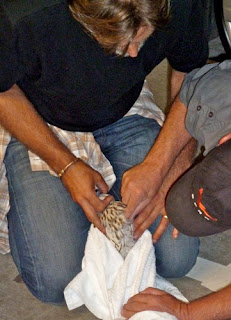 After a brief meeting, the bal-chatri was set, and, within a few minutes, the hawk was successfully captured.

Mark Russell performed a quick, cursory exam to check for signs of illness or injury and to "feel" its weight.

The bird was in excellent condition!

Check out the video (below) of the hawk being released just outside of the cathedral:

THANK YOU TO EVERYONE WHO HELPED
THIS BIRD RETURN TO FREEDOM!

Help us build our volunteer response force in San Francisco.
Sign up to volunteer, HERE, then enroll in our 2014 training HERE.