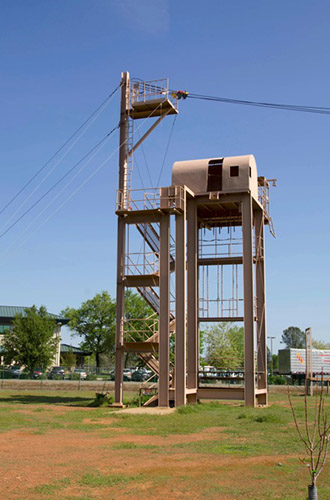 On April 1, Smokejumper Training Supervisor, Gerald Spence, was at the firefighter's training camp in Redding, preparing for this season's program, when his assistant, Mitch Hokanson, discovered a barn owl nest and four eggs.

The nest was inside the Exit Tower - a fuselage-like structure meant to resemble a small plane from which rookie jumpers practice repelling and parachuting.

But, it was not possible for the nest to stay where it was, and there would be too many disturbances in and around the structure that nest abandonment was certain. 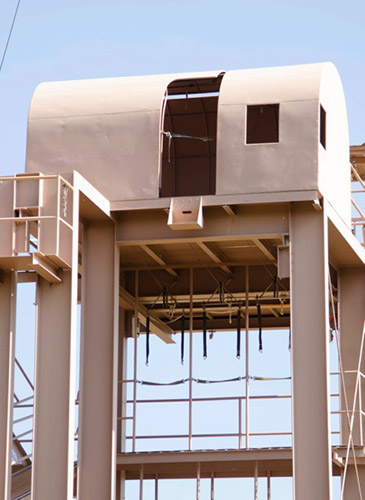 Gerry knew the nest and eggs were federally protected, so he reached out to Forest Service biologist, Kelly Wolcott. State and federal wildlife agencies were contacted and the rescue community was notified.

The US Fish and Wildlife Service responded quickly with authorization to allow removal of the eggs. WES' founder, Rebecca Dmytryk, advised on possible options.

If there were owlets, it would have been possible to relocate the chicks to an owl box where the parents could continue raising them, but that would not work with eggs. Especially owl eggs.


Unlike some birds, especially precocial species, that wait until the last egg has been laid to begin incubation, owls and other raptors begin incubating their eggs immediately, resulting in what's called asynchronous hatching - where the first egg laid is the first to hatch. Chicks can be hours, days, even a week apart in age. Asynchronous hatching allows the greatest success of a brood based on available food resources.

A female barn owl will stay on her eggs for about 30 days until they hatch and then continue brooding her young for a couple of weeks longer. During this time, the male owl delivers food to her and the owlets. 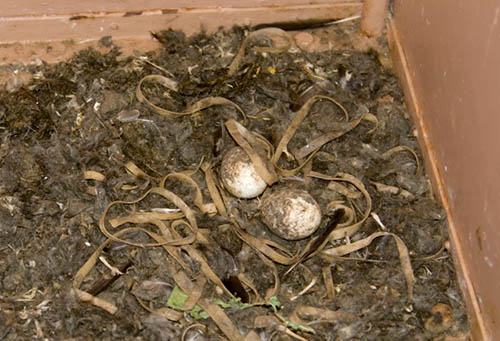 When Mitch first climbed the jumper's tower, an adult owl flush from the structure. The eggs would get cold if she stayed off of them for too long, so the crew made sure to limit disturbances in the area so the female owl would continue to incubate her eggs until the time came to move them.

A plan for what to do with the eggs and hatchlings began to take shape. The owl eggs would be transferred to the "Egg Lady" - egg salvage expert Loretta Gardiner.

Loretta oversees hatchery operations at Rancho Esquon - a sprawling 10,000 acre rice and almond farm in near Chico, CA. The farm serves as a "nursery" for hundreds of young waterfowl and gamebirds each year, taking in eggs that would otherwise be abandoned or destroyed from local farming operations. They also take in all the orphan ducklings from International Bird Rescue. More, HERE.

Although Loretta had never hatched owl eggs before, she was their best hope.

A couple of days before the transfer, two eggs were lost, perhaps destroyed by a raccoon. The two remaining eggs were collected on the morning of April 9th by Smokejumper Don Graham. He carefully placed them in a warm, foam-insulated box with plenty of padding to keep them safe during the hour-and-a-half drive to Durham.

Once at the hatchery, Loretta candled the eggs to check to see if they were viable. Indeed they were! They had good vein development and there was even some movement. She estimated they were about 2 weeks along.

Sure enough, the oldest egg hatched on April 23rd and the second egg was pipped, meaning the chick had started to break through the egg shell.


The first owlet was transferred to a licensed wildlife rehabilitator, Karen Scheuermann, who runs Tehema Wild Care in Cottonwood, California.

On April 25th, the second chick hatched. It stayed at the hatchery in the incubator for a couple of days before being transferred to Tehema Wild Care.

Unfortunately, the first chick did not make it. It may have gotten chilled. Hatchlings are extremely susceptible to hypothermia and often unable to recover.

Once transferred, the second chick was housed in an incubator until it was thermoregulating. It had a voracious appetite and ate readily.

Ideally, the owlet could be wild-fostered int o barn owl family. At the very least, it needed a buddy to grow up with, as wild animals can imprint on their human caregivers and be unreleasable.

Dmytryk reached out to Alex Godbe, with the Hungry Owl Project (HOP). Her program is dedicated to promoting natural predators, such as owls, to control rodent and other pests. If anybody would know of a suitable wild foster family, Alex would.

While Alex did not have a suitable wild nest to add the chick to right away, she did have an open hack box at a home where barn owls were nesting nearby. She also had a potential buddy lined up.

WES facilitated arrangements for transport of the owlet to HOP, receiving the Okay from California Department of Fish and Wildlife for the county transfer.

On May 21st, WES volunteer Sammarye Lewis drove to International Bird Rescue in Fairfield to meet Karen from Tehema Wild Care. She had driven the owlet from Cottonwood - about 150 miles (Thank you, Karen!!!).

From there, the owlet was driven another 50 miles to WildCare in Marin, where it was picked up by Alex Godbe.

Alex observed the owl's behavior for a few days, making sure it was eating on its own before moving it to the outdoor nest box.

Two days later, on May 23rd, the owlet was placed into its new home - a wooden barn owl nest box secured to a large tree. A screen on the entry hole prevented curious owls from entering. 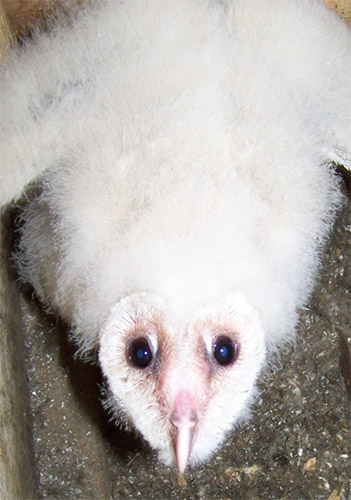 The owlet took to its new home very well. It kept up its appetite, consuming about 6 mice (dead) a night, which it would pluck from a pile left by its caregiver.

This is what owlets would do at this age in the wild - they are not fed directly by their parents but learn to pick up what the parents drop into the nest during night feedings. 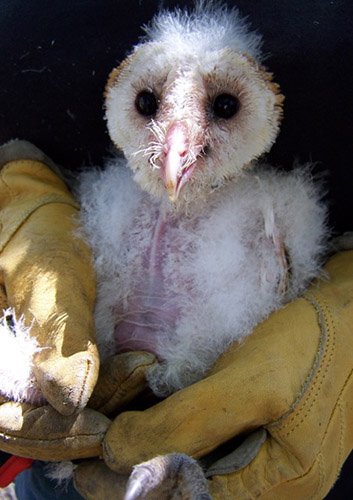 On June 7th, a "buddy" was introduced into the box.

The new owlet was from Nicasio. It had suffered a few injuries but had healed and was doing well.

After some initial aggression, the two owlets settled down.

They would grow up together in the box through their fledgling stage - when they take their first flight. 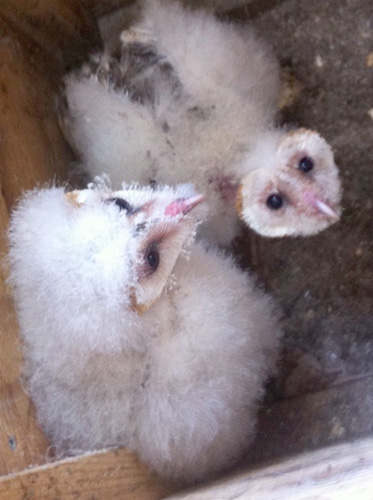 June 8th, this photo was taken. The Smokejumper's owlet is the one on the left - the larger or the two. 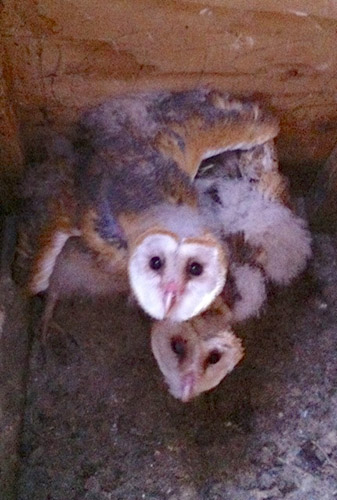 This June 16th picture shows the owlets starting to look like owls.

It won't be long before they fledge.

Today's picture - the owls are doing really, really well. Alex will remove the screen from the nest box entrance in about a week. 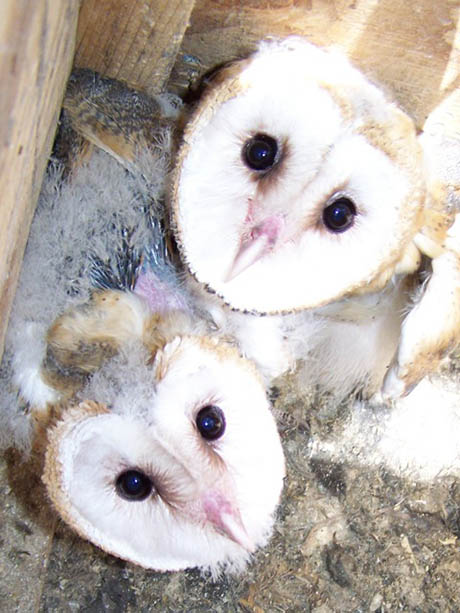 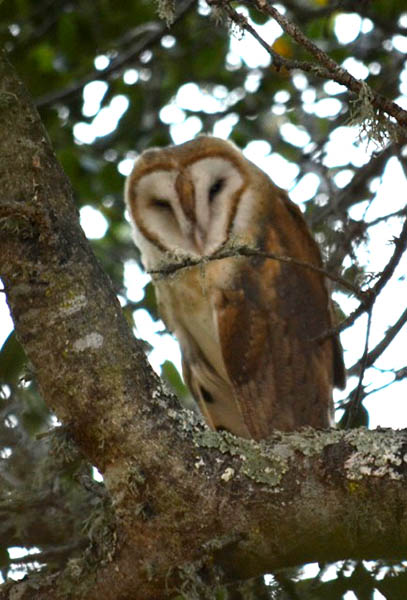 The screen on the opening of the owl box was removed so the owlets could leave during the night if they wanted to.

This morning, the box was checked and both were still inside.

Last night, though, several fledgings from nearby boxes were seen above the hack box, appearing to communicate with the two inside.

Both owlets fledged last night. This morning, the smokejumper owlet was photographed in a tree, very sleepy-eyed.

To everyone who helped in this owl's incredible
journey from an egg - thank you one and all!!!